And more often than not, it was also the weirdest of times.

2015 was a huge year for the city of Toronto. Sporting prowess was the best it’s been in years, Toronto musicians dominated the airwaves, and raccoon’s were posthumously shrouded in glory on our sidewalks.

So here’s a year in review as we look to the best, the worst, and the just plain weirdest Toronto had to offer in 2015.

THAT Bat Flip
The Blue Jays had a stunning season and there’s a lot to commend, but it’s their wild seventh inning in Game 5 against Texas that we will always remember. Not just for its length and the number of errors it contained, but because of Jose Bautista’s 3-run blast and the subsequent bat flip heard round the world.

The Pan Am Games
There was some skepticism before the games, and not all of it was good (see the bad) but the Pan Am’s turned out to be a real success story. Even if sport isn’t your bag, the free concerts cross the city, which saw the likes of The Flaming Lips, Kiesza, and some guy named Kanye, added to the buzz that filled Toronto.

Sexist Toronto Soccer Fan Fired
When Shauna Hunt confronted a bystander who shouted a vulgar sentiment (FHRITP) at her while she broadcast on CityNews it not only went viral – it also launched an online hunt for one of the soccer supporters, who was eventually fired from Hydro One (and subsequently rehired).

The Weeknd
Sure, Drake had a good year, but it would be remiss of us not to mention The Weeknd. Dominating the airwaves, soaring high as Spotify’s most streamed album of the year and scoring seven Grammy nods, it wasn’t exactly a washout for this guy either.

Syrian Refugees
Justin Trudeau and Kathleen Wynne were at Pearson airport to welcome the first 163 refugees to Canada and to hand out winter coats. Canada’s Syrian refugee plan, which pledged to welcome 25,000, set an example for the rest of the world.

Raptors Win Atlantic Division
The Toronto Raptors had another great season, winning the Atlantic Division and making it into the playoffs for the second year in a row. Although they lost in straight games to the Wizards, they’ve started the new season strong and are currently 5th in the Eastern Conference. #WeTheNorth

Toronto Not Bidding on Olympics
Mayor John Tory decided fairly late in the game that Toronto would not bid to host the 2024 Olympics. And while it would have been exciting, considering the bid alone could have cost the city $60 million, we think it’s a smart move to bow out.

Hotline Bling
Between locking lips with Serena Williams and releasing his new album, 2015 was undeniably Drake’s year (just don’t ask Meek Mill about it). But then he put on a thick turtleneck sweater, got in a lightbox, and danced to his hit song of the summer, Hotline Bling. And the internet went crazy.

Billy Bishop Tunnel Opens
Porter Airlines is a blessing for many of Toronto’s jetsetters, but this year the curse of the ferry has been lifted to boot. An underwater tunnel opened in July, which means we can get from mainland to the Billy Bishop check-in area in six minutes without sweating about missing our flights.

TTC Ended Early Closure North of Eglington
After closing early for tunnel repairs began in 2008, the stretch between Eglington and Finch will finally operate at regular hours. It’s 6 years behind schedule but we’re guessing most will prefer it to a drunken bus ride home late Saturday night.

Police Carding
After reports found that random police checks were targeting young African-Canadian men, MP’s voted to rule that random, arbitrary carding by police forces across Ontario will be made illegal. Yes, we could have easily filed this under WORST, but we severely hope its illegal status will help to stop it from continuing. Nova Scotia Ads
Nova Scotia poked fun at Toronto when its advertising campaign noted the differences between the cities with billboards that read, “We heard you have an aquarium. That’s nice”, accompanied by a photo of the Atlantic Ocean. 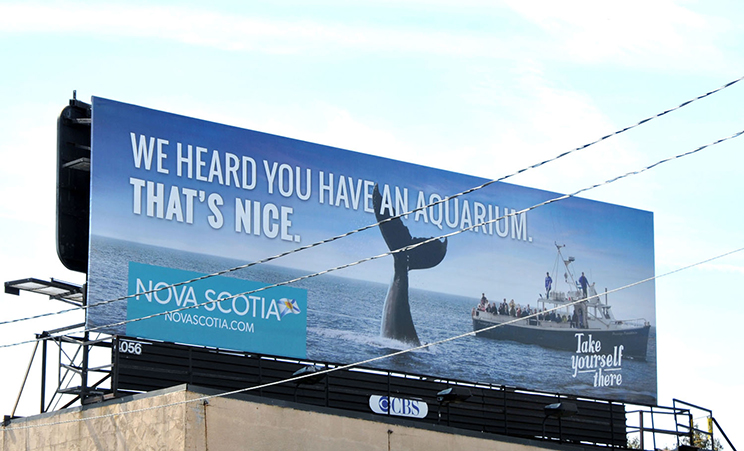 Delayed Streetcars
Despite Bombardier’s commitment to delivering 70 new streetcars by the end of the year, it has now been pushed back to the end of 2016. The TTC voted in favour of suing the company for $50 million to recoup lost costs, but that still doesn’t get us any more streetcars just yet.

The Gardiner Vote
After weeks of intense lobbying, Toronto council backed John Tory in a narrow majority, to keep the eastern Gardiner as an elevated highway. The ageing highway will be rebuilt towards the end of the decade.

Uber Protests
Say what you like about Uber (or don’t eat) – just don’t compare it to a jihadist militant group. That’s what one cabbie did during a staged protest in December. Equally ill-advised, is hanging onto a moving Uber after publicly confronting its driver. Toronto has been characteristically slow to adopt to new innovation, and while we feel bad for cab companies, it’s a little like the Yellow Pages screaming at Google at this point. HOV Lanes
The Pan Am Games decimated Toronto’s highways for weeks back in the summer, when HOV lanes were opened solely for the use of athletes, media, and other Games accredited vehicles. Anyone with under three people per vehicle were banned from the lanes, causing chaos and road rage for many commuters.

EDM Festivals
It’s been a rough year for Electronic music festivals in Toronto. Veld was cancelled just hours before the festival was due to start and Digital Dreams was another casualty when it was forced to abandon its Saturday performances in the interest of public safety.

Closing Bars
It’s been a year for drinking establishments closing their doors to the public. Guvernment closed back in January and Kool Haus quickly followed suit. And this fall, Brunswick House announced it was the last call for the 139-year-old watering hole.

Thorncliffe Park Kids Absent From School
Whatever your opinion on the new sex-ed curriculum imposed upon the province, it was extremely concerning to see hundreds of children absent from school for days at a time as the result of parents protests. Thorncliffe were at the centre of the storm with a reported half of students kept out of class.

Tunnel Mystery Near Pan Am Games
Security officials were puzzled when they discovered an underground tunnel near The Rexall Centre, the tennis arena for the summers Pan Am Games. It turned out to be a 22 year old construction workers man cave who just wanted a place to hang out.

Conrad the Raccoon
Something none of us could have predicted in 2015 was Toronto’s (and possibly the world’s) greatest memorial service to roadkill. But when Conrad the raccoon was not picked up by city services, mourners gathered to pay tribute to him at his final resting place on Yonge Street.

Tropical Fall Weather
When the summer nights drew in we waited to unleash our heavy jackets from the depths of our closets – but the day never came. With temperatures as high as 20C in the fall and no snowfall, it’s been a year of pretty freaky weather.

Peacock Escaped From High Park Zoo
To the surprise of Toronto residents, a peacock from High Park Zoo decided to take a tour of the city, flying from roof to roof across west-end neighbourhoods. The brightly coloured bird eventually returned – but not before a stopover at the bison pen.

Lightsabre Battle
The force was strong with many a Torontonian in October, when fans of Star Wars converged on Nathan Phillips Square for a battle against evil, complete with handmade lightsabres.

Fashion Santa
Yorkdale’s sexy Santa, aka Canadian model, Paul Mason, gained international attention when he unveiled his hipster look at the shopping mall. And Justin Bieber was clearly a fan, too.