Facebook faced criticism this weekend after it enabled its Safety Check feature for the Paris terrorist attacks, but not for Beirut and other bombings around the world.

CEO Mark Zuckerberg has since committed to turning on the feature – which allows people in an affected region let their friends know they’re safe in the event of a disaster – in more human disasters moving forward. In defending his company’s actions, he explained that the Paris terror attacks marked the first time that Facebook has enabled Safety Check for a human disaster, as opposed to a natural disaster like an earthquake.

A very early form of the Safety Check feature initially launched in 2011 during Tokyo’s tsunami and nuclear disaster. It’s since been enabled during earthquakes in Afghanistan, Nepal, and Chile, as well as during Typhoon Ruby in the Philippines and Tropical Cyclone Pam in the South Pacific.

In its current form, however, Facebook says the feature can’t yet be applied to all crises.

“In the case of natural disasters, we apply a set of criteria that includes the scope, scale and impact,” wrote Alex Schultz, vice president of growth. “During an ongoing crisis, like war or epidemic, Safety Check in its current form is not that useful for people: because there isn’t a clear start or end point and, unfortunately, it’s impossible to know when someone is truly ‘safe.’”

In the cases of the Paris disaster, the company said it chose to enable the feature because it noticed a lot of activity on the ground.

The Safety Check, however, wasn’t the only thing some people are having an issue with.

In the immediate wake of the Paris attacks, Facebook was also quick to offer updated profile pictures with French flags, yet there was nothing similar to recognize the bombings in Beirut, where 40 people had died the previous day.

“You are right that there are many other important conflicts in the world,” Zuckerberg wrote in a comment on Facebook. “We care about all people equally, and we will work hard to help people suffering in as many of these situations as we can.” 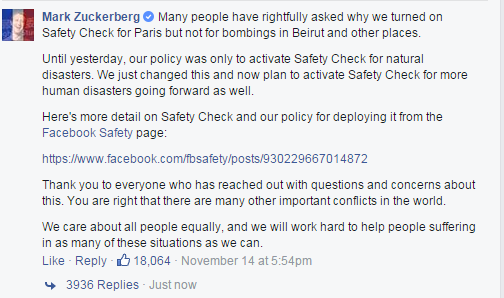 He also commented on his picture, explaining that Facebook’s policy just changed on Friday to allow the feature to be used in a human disaster, and going forward it will be used in more.

The hope is, of course, that neither of these features will need to be activated at any point in the near future in the first place. Unfortunately, however, it’s probably wise to prepare for all situations at this point. Not to mention, as the number of Facebook users continues to grow around the world, it’s probably also smart to employ features that reflect a global viewpoint as opposed to a Western-centric one.