Don’t feel bad for her, though, because she’s not as homeless as she might have you believe. You see, there’s a distinct difference between true homelessness and the privilege of being between houses.

Literally the posterwoman for delusion, Whyte created a sign to announce her misfortune of being a millionaire who can’t find her dream home. Sadly, though, she never followed through with her threat to stand on street corners with it, a move that would have probably invited a very necessary reality check and fascinating case study for how not to look for a home.

After selling her five-bedroom North Vancouver house in March for $1.3 million, she, along with her husband and son, began looking for a new home. Armed with a $1.1 million budget, the family of three quickly realized skyrocketing prices and low supply priced them out of their own neighbourhood.

Sure, that kind of sucks, but a few minutes of research would have ruled out the element of surprise.

In addition to her sign, Whyte launched a terribly ineffective advertising campaign that consisted of pleading for offers on Craigslist, littering the neighbourhood with flyers – “anywhere I could put a piece of paper” – and stringing her 10-year-old son along door-to-door to spam people with 248 flyers before settling for an ice cream break. 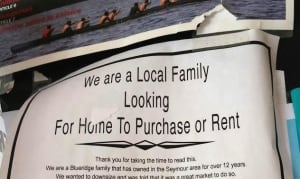 Whyte says a lot of elderly people called her crazy – or as we might say, ‘accurate’ – while claiming others have apparently been forced to do the same thing, an assertion that would be as equally outrageous if true as it would be if she simply made it up.

Hey, sometimes you just have to whine to the media to get your way.