New Year’s Eve should be the best night of the year – so why does organizing the final party in our calendar always feel like such a headache? With different tastes and friends to cater to, it can be hard to find something that pleases everyone, and sometimes it’s hard to know where to look.

But never fear, because we’ve got your back. Whether you’re looking for the blowout of the century, a slice of culture at a museum or a romantic evening with just you and your other half, we’ve got it covered.

So slip into your dancing shoes – or your comfiest ones – and find the perfect spot to welcome 2016 in Vancouver.

If You Want to Ring it in Fancy.
Celebrate the biggest night of the year at the Fairmount Hotel Vancouver New Year’s Eve Bash. The crème de la crème of Vancouver DJ talent will be playing across five luxury ballrooms in the “castle in the city.” Plus, there are plenty of VIP packages to make your evening that bit more fabulous.

For a Meal at a Top Restaurant with a Side of Live Music.
Tuck into your choice of two festive dinners at the Boulevard Kitchen & Oyster Bar. Sit down at 5pm or 8pm, for a four-course meal and countdown to midnight with a live string quartet and a DJ. Choose from heritage pork and foie gras terrine and caramelized black cod or pick from the a la carte menu.

If You’re Looking for an Abundance of Young Professionals.
For those looking for fabulous interiors, long tables where you can socialize with friends (and strangers if you’re feeling sociable) and a selection of incredible cocktails, Oakwood is where you want to be this December 31. Their NYE menu is full of deliciously delicate bites so there’ll be plenty of room for Champagne.

If You Want to Party Hard and Avoid an Overly Pretentious Crowd.
Sing your way into 2016 at the Guilty Pleasure NYE prom with a nostalgic trip back to the eighties, nineties and noughties. This is not a place for posing – if you want to cut shapes on the dancefloor with your squad, and you don’t care who sees you, there’s no better venue. But that’s no excuse not to make an effort – they will be crowning a best dressed King and Queen of the prom.

For a Mixed Bag of All Kinds.
Who says you have to pigeonhole yourself this NYE? Have your cake and eat it too with a mix of everything at the FOX Cabaret, which has funnies from the comedy crew and live music from The Ballantynes. And if you get bored of that you can head over to some Motown dancing or get your shoe-gazing on with some indie classics.

If a theme’s your thing…
We all like to look sharp for the biggest night of the year, but if your idea of dressing up involves a disguise and a cape, UVA Wine and Cocktail Bar is well worth checking out. This New Year’s Eve the venue tucked inside the Moda hotel is hosting a superhero-themed evening – but don’t worry, this is strictly for adults.

If You’re Still into Clubs and Want To Get Crazy.
So, you’re still determined to go to a full-on nightclub? We salute you. Celebrities nightclub has some of the city’s best DJs, a huge countdown on an L.E.D wall and a Champagne toast at midnight. With a huge sound system and dancefloor, you can really let your hair down to club anthems until 4am (or vacate at 1.30 am for drunk food, no judgement).

To Kick-Start Your New Year’s Eve Fitness Resolutions.
If you really mean it this time when you say you’re getting active in the new year, kick start your fitness routine on day one. Sign up for the Resolution 5k Run on January 1 and begin 2016 on the right foot. You may want to sit this New Year’s Eve out in preparation, though – Jager Bombs and jogging don’t mix.

Laugh Off the Year.
Want to start the year rolling in the aisles? Then get your ticket to Yuk Yuk’s New Year’s Eve Special comedy show. Winner of the 2014 Champ of Comedy award, James Kennedy, will be headlining with his energetic brand of humour and veteran comic Damonde Tschritter will MCthe event and tickle funny bones left and centre.

For a Guaranteed Midnight Kiss.
If you want to lock lips when the clock strikes 12, you’re sure to find a willing partner at Republic’s NYE Black Out Gala. With two floors you’ll have plenty of scope for searching out Mr. or Mrs. Right Now, and there are more than a few dark corners if you’re feeling shy about getting kissed on the dancefloor.

If You Want to Rock Out.
Touting itself as a ‘Bands, Booze & Burlesque NYE Extravaganza’, The Railway Club is offering eclectic live music that you won’t want to miss out on if that’s your jam. With a huge offering of bands on the lineup varying from blues and soul to all out rock n roll, it’s the perfect soundtrack to bring in 2016. 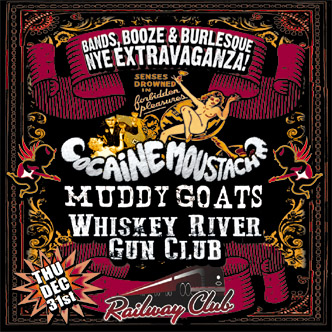 If it’s a Family Affair.
Vancouver will host their first free New Year’s Eve event in a decade, with live music, fireworks and food trucks at Canada Place. There will be a 9pm countdown to cater for kids, and again at midnight for the adults. Plus, it will feature a smaller ticketed area where attendees can buy alcohol.

For the best Instagram material.
Snap the cr*p out of your New Year’s Eve celebrations with stunning ocean views from The Three Brits Public House. There’s an extensive cocktail list to work your way through, as well as the delicious organic menu, which won’t need any filters. It’s open until 3am and, best of all, it’s a non-ticketed event so you just need to RSVP.

For a NYE for two, make dinner reservations.
Nothing could be more romantic than a candlelit Italian meal with your special someone. Cut out the crowds and the noise of New Year’s and share an intimate meal of oysters, quail or squid ink tortellini with your significant other at La Pentola inside the OPUS Hotel. Choose either a 6pm or 8pm meal (menus vary) at this award-winning eatery.

For a cultured experience.
Geek out at The Space and Science museum, which is once again hosting a New Year’s Eve party. There are two rooms of music, six top DJs and a sound and light show to help you bring in 2016. Overlooking False Creek and the Olympic Village, it’s the perfect setting to celebrate – but book up now as tickets always sell out.