Looking over the origin of Canada’s refugees, who come from literally every corner of the world, one can see a clear correlation between major crisis and displaced populations.

Almost 8,000 Haitians landed in Canada between 2004 and 2013; in 2010, one of the deadliest earthquakes in history levelled most of the country. Over 12,000 Sri Lankans have relocated to Canada in that same period; a bitter 25-year civil war in Sri Lanka didn’t end until 2009. Mexico’s drug war has caused a hell of a lot more damage than good, which is reflected by the 6,500 Mexicans who’ve fled their country to call Canada home.

None of these populations come close to the number one source of refugees to Canada, however: Colombia. Over 17,000 Colombians have claimed refugee status within our borders during the nine-year period these stats were compiled, which probably comes as a surprise.

Unless you watch Narcos.

Colombia hasn’t made headlines for any high-profile flare-ups or disasters, but the South American country is embroiled in one of the lengthiest impediments to human well-being anywhere in the world. An ongoing low-intensity asymmetric war between the Colombian government, paramilitary groups, crime syndicates, and left-wing guerrillas has put the country in a consistent state of undesirable livability. 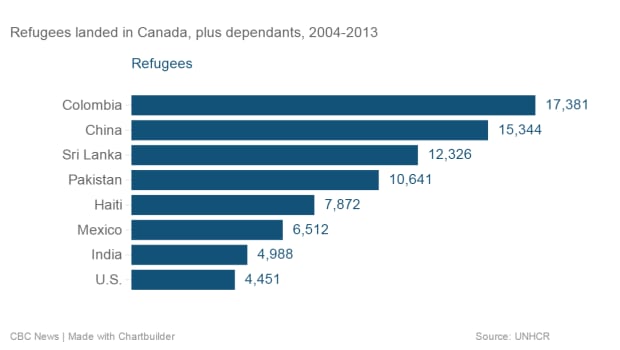 Last year, 23,285 refugees were admitted to Canada, who now account for slightly less than 10 per cent of all immigrants who settle here. The Immigration and Refugee Board of Canada has approved applications for refugees from 121 countries so far in 2015.

Only 1,200 Syrians, who account for most of the refugees currently streaming into Europe, were admitted into Canada last year. They have by far the highest acceptance rate of all refugees to Canada in 2014 at 94 per cent. North Koreans, in contrast, had an acceptance rate of 0 per cent. Even a few Americans were accepted (2.8 per cent) on refugee status. 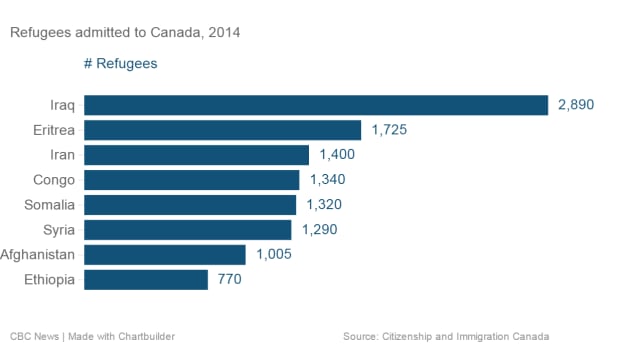