Let’s be honest, once you hit 30, it’s kind of a big deal to call someone your boyfriend or girlfriend.

You know that, and so do your often over zealous friends and family – especially if you’ve been single for a while.

That’s why it’s always slightly terrifying (and mildly panic inducing) when you find yourself spending most of your free time with someone else and things are actually going pretty well.

‘Cause that’s when you’re mind starts to work in overdrive.

What are we even doing? Is this a good idea? Is he/she dating anyone else? Should I be going on dates with other people? What does he/she even want from me in the first place? Should I have slept over? Is it weird to invite him/her to that wedding? What are we anyway? Is this a huge mistake? I can’t deal with a broken heart right now. Do I even like him/her? Maybe I should end things now before they go any further.

Then your best friend inevitably ‘gets to be’ the unsuspecting sounding board for your overworking brain over brunch, pre-game drinks, or patio session. And – despite them having been in the same situation – he or she basically tells you to shut the hell up and stop overthinking. “Stop over-analyzing it,” they’lll say. “Just go with it.”

But the thing is, it’s pretty much impossible not to over-analyze these days, as much as you’d like to be cool and go with the flow. 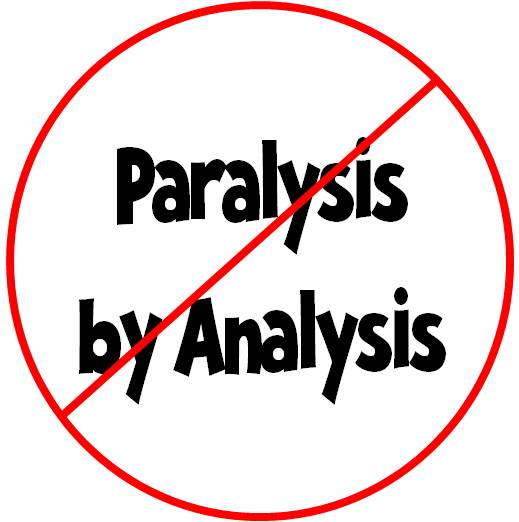 After all, by now, most of us would rather be alone than waste our time in a shelf-life relationship the way we once would (despite how amazing it could be in its limited lifespan).

For many of us, gone are the days of exclusively dating someone because it’s convenient. That’s why the prospect of entering a serious relationship with someone can make your brain spin.

After all, committing to someone is a big deal. It means shutting the door on your ex for good (or at least the time being), taking someone else’s needs – and schedule – into consideration, and saying goodbye to those weekends where you can be as shamelessly selfish with your time as possible.

Of course, relationships have always been that way. But now that we’re all functioning adults (or at least pretending to be), life somehow became as real as a slap in the face once deadlines, mortgages, and competing demands entered the picture. Few young professionals have the time to make a habit of sharing their bed with someone who’s only going to leave the other side cold again in a matter of months – we’d rather have it all to ourselves.

To be clear, there’s nothing wrong with critically thinking about a relationship – or pseudo relationship – you’ve suddenly found yourself in. After all, we overthink our Netflix choices, why wouldn’t we assess a situation that could be potentially life altering?

Not to mention, nobody wants to make the same relationship mistakes again…and again

Like touching a hot stove as a kid, anyone who’s experienced a broken heart or messy break-up knows to approach a romantic situation with caution. When it comes to dating, most of us are the product of every relationship (both good and bad), fling, “complicated” situation, and broken heart we’ve ever experienced – and that’s not always a good thing.

We inevitably bring that experience into future romantic situations as we approach with caution.

Most of us are seasoned enough in the insta-relationship department to know that any type of romantic situation – whether summer fling or newfound hibernation season partner in crime – has nowhere to go but downhill if it starts on such a high.

So, yeah, there’s logic behind the madness of our over-thinking minds.

The thing is, there are many problems with overthinking – and they have the power to end your newfound relationship before the “I love you” stage is even on the horizon.

First of all, if you mind is already in overdrive when you’re in the other person’s company, there’s no way you’ll be able to be in the moment or “go with the flow” in that totally uncalculated and organic way that you used to before dating became complicated. Plus, once you vocalize any of your overthought insights, the relationship no longer becomes easy and effortless the way it is at the beginning.

You may in turn get the other person thinking – and that may not work out in your favour. Overthinking can also create perceived problems that wouldn’t be there otherwise and tends to heighten your expectations.

So, what’s the solution? Dispelling our checklist of requirements we’ve accumulated, rolling with it, and exposing our gated hearts to the world the way we did at 21? It comes down to the age-old question of where to draw the line between your brain and your heart.

Have an open and honest dialogue at the very start – as in the first date or two – about what the other person is looking for (without making it weird). If you wait until six or seven dates in, you could find yourself sadly and naively disappointed when you were looking for something serious and the other was looking for a fling.

Don’t wear your heart on your keypad. It’s easy to do. But – especially at the beginning when the two of you don’t know each other well – text messages are not only a paper trail begging to be shared with opinionated friends, they can be misconstrued in a way that’s not going to do you any favours.

Finally, while proceeding with caution, don’t lose sight of what it means to date the old-fashioned way.

Now get out there and love, dammit.