Canada’s ruling Liberal government is making a late push for the Millennial vote ahead of October’s federal election.

Speaking to reporters yesterday, Prime Minister Justin Trudeau said “Canadians shouldn’t be paying more for their already very expensive internet and communications services, and that is something we will take into account.”

Two proposals among the account taking include a cap on phone and internet bills and forcing Canada’s big telcos to offer smaller providers access to their currently exclusive wireless infrastructure. The hope is that the latter measure would see increased competition drive down costs across the board or that Canadians will be able to choose cheaper options.

It’s no secret that Canada’s wireless pricing is among the highest in the world. Case in point: 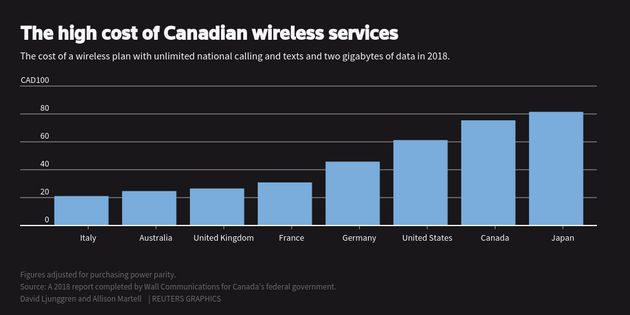 It should go without saying that Canada’s Big Three – Bell, Rogers, and Telus – don’t like any of this one bit. Such is to be expected when a cartel is threatened.

Telus is giving the matter the silent treatment, while questions to Telus and Bell were forwarded to the Canadian Wireless Telecommunications Association (CWTA). The CWTA responded flippantly.

“When you get into an election campaign you get into emotion sometimes,” said CWTA President and Chief Executive Robert Ghiz. “It’s extremely important that any political party make sure they don’t put too much short-term thinking into something that is going to drive our economy.”

It must be said that Trudeau’s comments are disappointingly short-term. His government has had four years to address the issue and instead takes a big swing at the last minute. I rue the possibility of his re-election if only for the fact that it will likely kick off with another false promise.