In 2015, we saw a growing number of initiatives that reminded us that – wait for it – Instagram isn’t real life.

From an outcry from a teen Instagram sensation, to art that exposes the façade of the social media outlet, 2015 was the year of calling out Instagram for what it actually is; a curated version of the life you choose to show the outside world.

Yet, many of us still catch ourselves buying into the notion that big-time bloggers live lives that are as glossy as their perfectly curated Instagram shots.

With the rise of Instagram stars has come Instagram star couples who may as well hashtag all of their shots with #relationshipgoals – their relationship looks so damn perfect via their sunset selfies and hand-holding adventure shots. 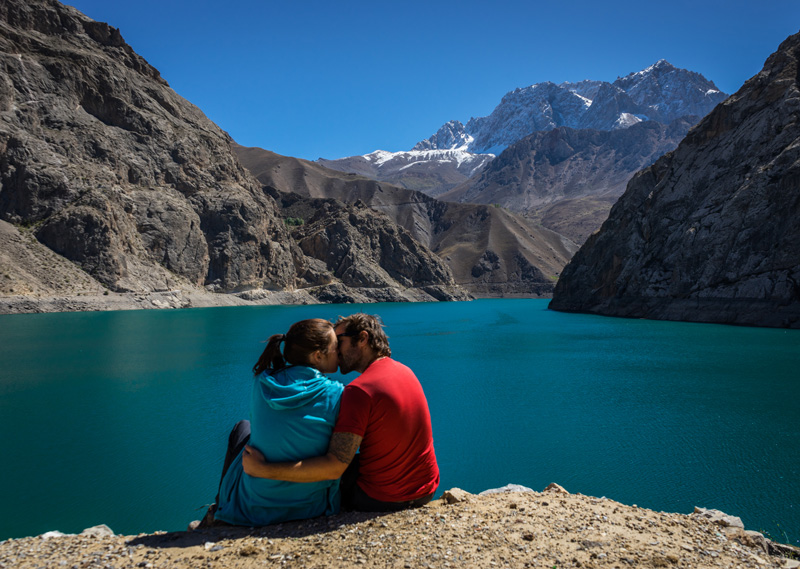 One such couple is Australia natives Jarryd Salem and fiancée Alesha Bradford, who have been documenting their overland trip across Asia for a few years now on their website Nomadasaurus.

As it turns out, there relationship wasn’t as great outside of Instagram as it was through a filter.

In a recent post titled “Behind the Scenes – it’s time to fix ourselves,” Salem reveals that he and Bradford were taking a break from their adventures to re-evaluate their relationship, which has taken a hit thanks to a life on the road that isn’t nearly as glamorous as it looks. After seven years together, the two have spent time apart as of late; Bradford flew home to Australia while Salem remained in Europe. Bradford will return later in January.

Salem mentioned things like an inevitably unhealthy lifestyle that resulted in weight gain for both of them, and the struggle of not having daily contact with friends and family. These problems eventually began to wear them – and their relationship – down.

“We would snap at each other over small things, and these minor arguments would turn into all-day affairs,” he writes. “Alesha would get angry at me over trivial matters, and I would retaliate.”

“Alesha started to resent travel, and I started to become numb to it,” writes Salem. “Very few things excited us anymore. We kept saying it was simply one of our ‘curses of long-term travel’, but in all honesty there was more to it. Worst of all, we neglected our relationship.” Somewhat refreshingly, he gets candid about the specifics. “In the end I stopped being the caring partner that I should be,” he admits. “I neglected Alesha’s feelings and she would attack me for neglecting her. I continued to neglect her because I couldn’t stand being attacked. It was a vicious cycle.”

Through the initial stages of this deterioration, the couple did what any Instagram couple would do: they kept faking it, with smiling photos documenting their journey through Mongolia and Central Asia, before finally deciding to come clean.

“For the last year we didn’t want to be negative, through the blog and through our social media accounts and say we’re having problems, because we thought no one really cared,” said Salem, according to CNN. “But it got to the point where we realized that perhaps other people have experienced this even if they’re looking up to these Instagram couples and thinking life looks great and it’s wonderful.”

So, they decided to be honest, and admit that they too had their problems.

“In no way are we complaining about our nomadic lifestyle,” he says, according to CNN. “While we do work extremely hard to be able to stay on the road, we know just how lucky we are to be in a position to travel endlessly, and that many people would love to do the same thing themselves.

“We just wanted to show the world that long term travel isn’t one big holiday. There’s a lot more to our lives than just sunsets and pretty landscapes, which doesn’t get shown on social media,” he says.

The revelations and subsequent break from one another doesn’t mean that the couple has thrown in the towel on their coupled-up adventures. The two will reunite in Turkey on January 20 and continue with their goal to travel overland to South Africa.

This time, however, the pair will be more truthful in the documentation of it all. Not to mention, they’re switching up their traveling style to make it more conducive to their relationship.

While Salem and Banks may have thousands of followers, the principle rings true for many of the smiling couples on your newsfeed who make you question your own relationship. Nothing is as effortlessly good as it looks on social media. Once we collectively begin to realize that, everyone will benefit from an open, honest dialogue (both online and offline) that ensues.