And since we spend just over a third of our lives working it seems fitting that our place of business is one of the things that we might want to change during this time of re-evaluation.

According to LinkedIn, the month of January is when the largest percentage of its members start looking for a new job. And in order to facilitate our job hunt, they’ve analysed the hiring and recruiting data from last year and put together a list of the 25 hottest skills of 2015.

The site notes that many recruiters were recruiting and hiring candidates with these skills right up towards the end of last year, so if you hold one or more of them you’re in luck – you can expect these to stay in demand into at least the early part of 2016.

Here are the 25 hottest skills of 2015 on LinkedIn Canada: 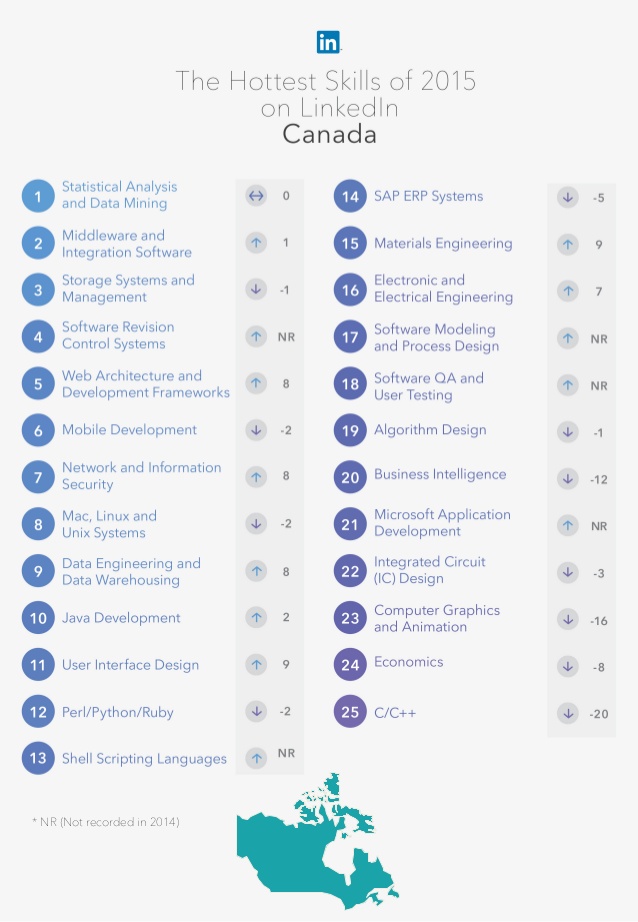 Statistical Analysis and Data Mining topped the list for Canada in 2015 (just as it did back in 2014) and was second on LinkedIn’s Global top 25 hottest skills list. Ans, as the only category consistently ranked in the top 4 across all of the countries analyzed, anyone specialising in data storage, retrieval, and analysis could potentially travel the world with their skills.

What’s clear to see from the list is that anyone working in computer sciences should have a pretty easy time finding work in 2016. Many of the top ranking skills featured software, while both Web Architecture and Mobile Development found their way into the top ten (both improving on their position in last year’s table.)

Meanwhile, Social Media Marketing – which first made the list last year – dropped out of the top 25 in 2015.

And if you’re scratching your head while unable to find a skillset in the poll that matches your own, perhaps it’s time to learn some new ones.