If you live in Toronto, I don’t have to tell you that the Much Music Video Awards (MMVAs) hit the city yesterday.

As usual, it took over the streets and parking lot outside of Much’s Queen Street headquarters – and you could hear the screaming fans and music from blocks away.

The massive red carpet was filled with media (who knew it was a survival of the fittest when it came to chatting with the heavy hitters), dozens of PR people, and – of course – some of the biggest names in music. 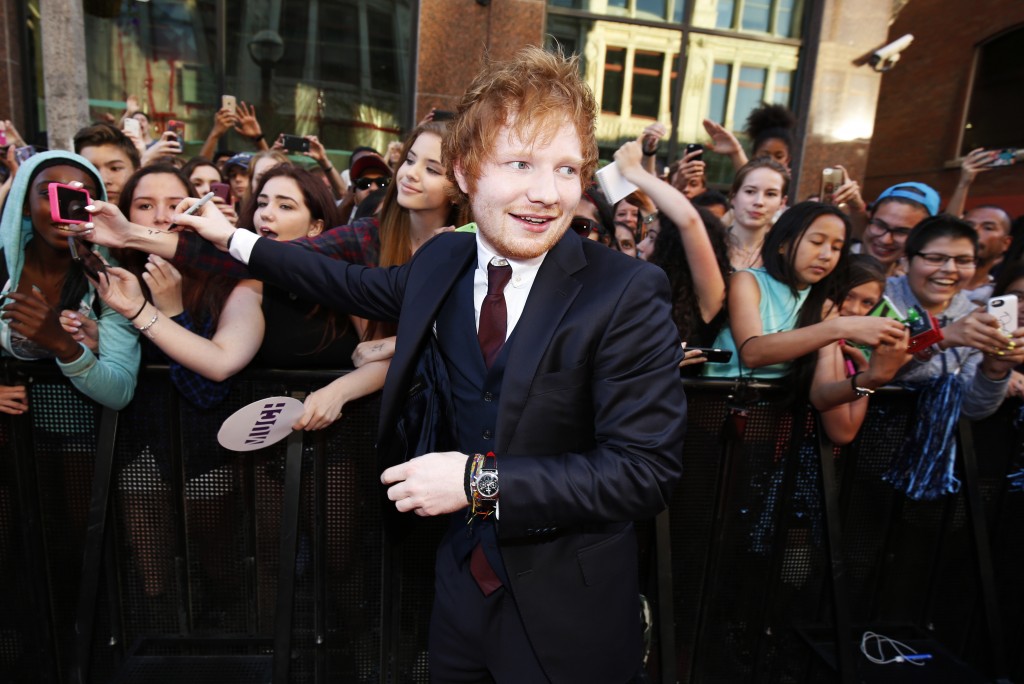 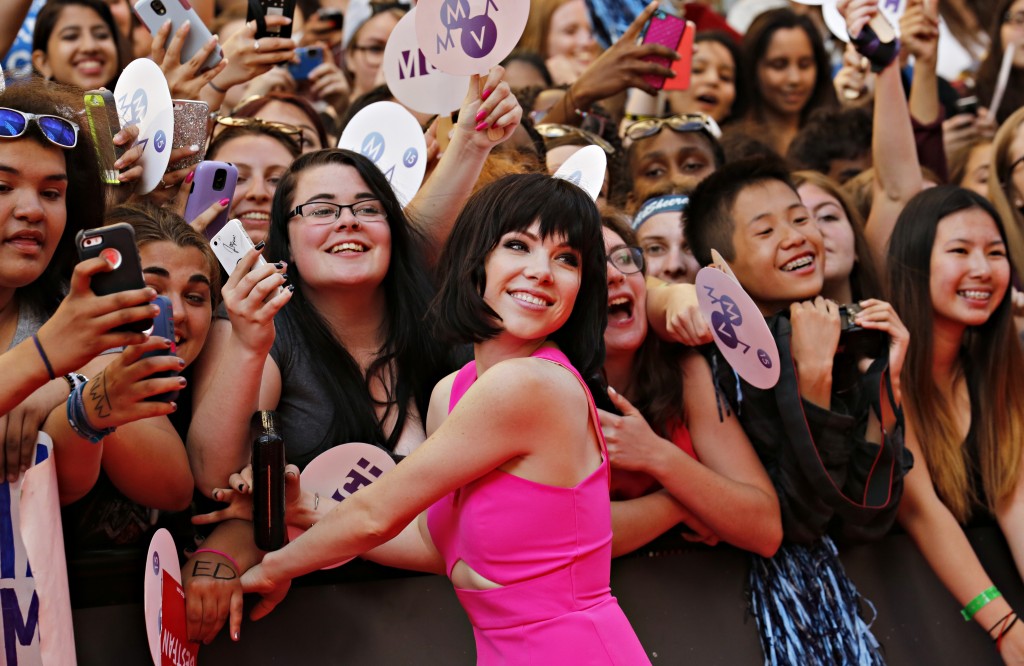 After Ed Sheeran surprised a fan on stage last week in the best way ever, I asked the baby-faced musician about his most memorable fan experience. “It’s stuff like that. It’s stuff that’s not planned – I think a lot of people thought it was planned. It’s stuff that you just see happening, then you jump in and jump out. You want to get an adrenaline rush,” he said.

When it comes to what he’s most looking forward to this summer, he gives a short but honest answer: “Going home,” said Sheeran without hesitation. Fair enough – it had been a long day for him, as he later revealed in the pressroom when asked how he prepped for the show.

“They made me run it a bunch of times. I flew in from Portland last night at midnight. We landed at 5am and we all got three hours of sleep. We ran from 9am up until 7pm when we did the red carpet. Basically, the preparation was not a lot of sleep, no food, and a bit of alcohol.” 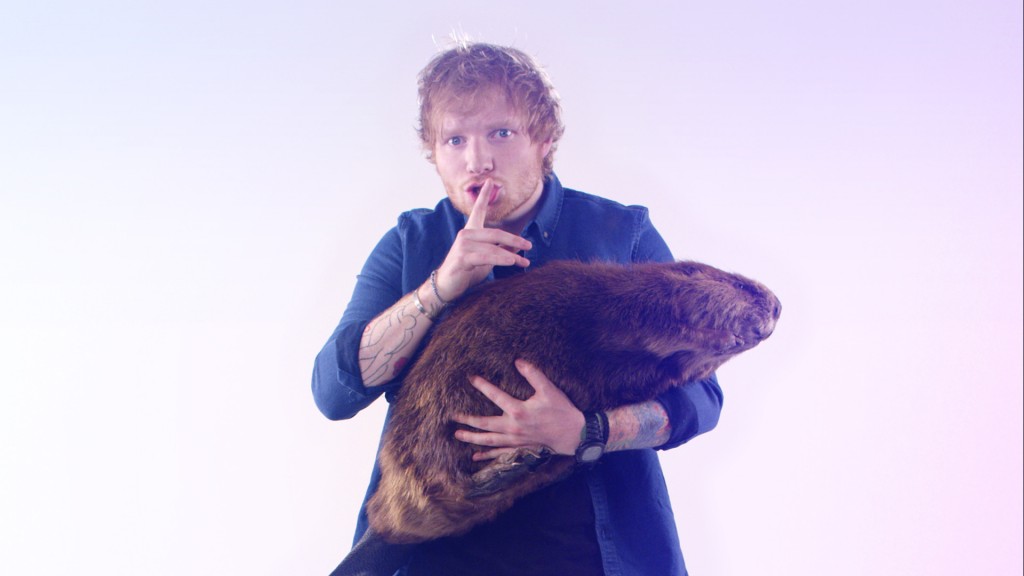 He may be homesick, but my favourite redhead has big love for Canada:

“Canada in general is one of the first places outside of Europe and the UK to accept me, and it took a very long time in America to get people to actually care. The first like four times I went over to the United States, it was very much a struggle of trying to get people interested and trying and to do this and do that. The very first time I came to Toronto, I came with Snow Patrol and we did Toronto, Montreal, and Quebec. I remember waking out on stage that first night, and the reception I got – I had never gotten that from being an opening act before, let alone a headline act for an opening act. It was a really good thing,” says Sheeran.

“I feel like Toronto, but Canada in general, is a very, very special country to me. I was chatting with Abel from The Weeknd today about the similarities between Canada and England and pop music doesn’t really get big in Canada or England. It’s usually the alternative stuff that people really connect with and it’s nice to come over to Canada and have someone who isn’t necessary experiencing this stuff and it’s nice that they get to meet it.”

I have a massive woman crush on Lights, whose album Little Machines has been on repeat since it dropped last fall. If you follow her on Instagram, you know she and her musician husband Beau Boken are pretty much the coolest parents ever to their adorable little rocker baby, Rocket – a tour bus staple. 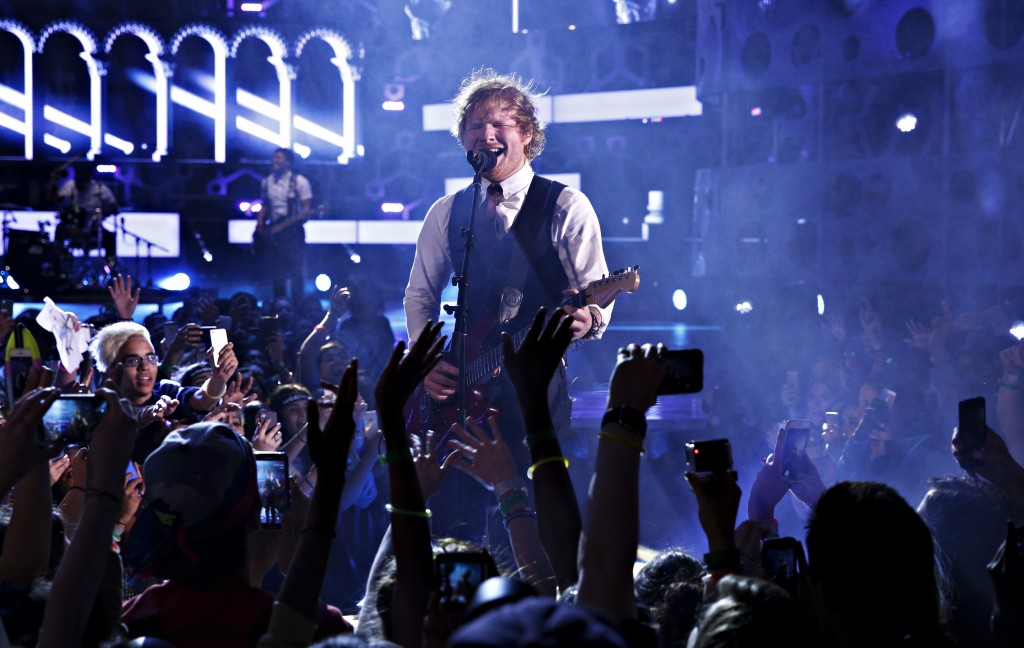 “I would say don’t be afraid of it. Before they have kids, people feel like they have to have all of their ducks in a row and become this cliché mom and dad, but it doesn’t have to change your life. It just augments your life and brings the best things about your life to the surface, and you continue being yourself and give that child the best life possible,” said Lights when I asked for her advice on being a cool parent.

Of the song that resonates most with her on Little Machines, she cites what’s one of her most romantic songs, “Don’t Go Home Without Me.”

“I was out on a writing trip in Mexico and it was this really honest song that I wanted to make it on the record, and it did,” she says. She had to narrow down 48 songs to just 11 for Little Machines.

On the topic of woman crushes, the stunning Gigi Hadid stopped by the pressroom to chat everything from social media to how hot Ruby Rose is (just no relationship questions, she requested). 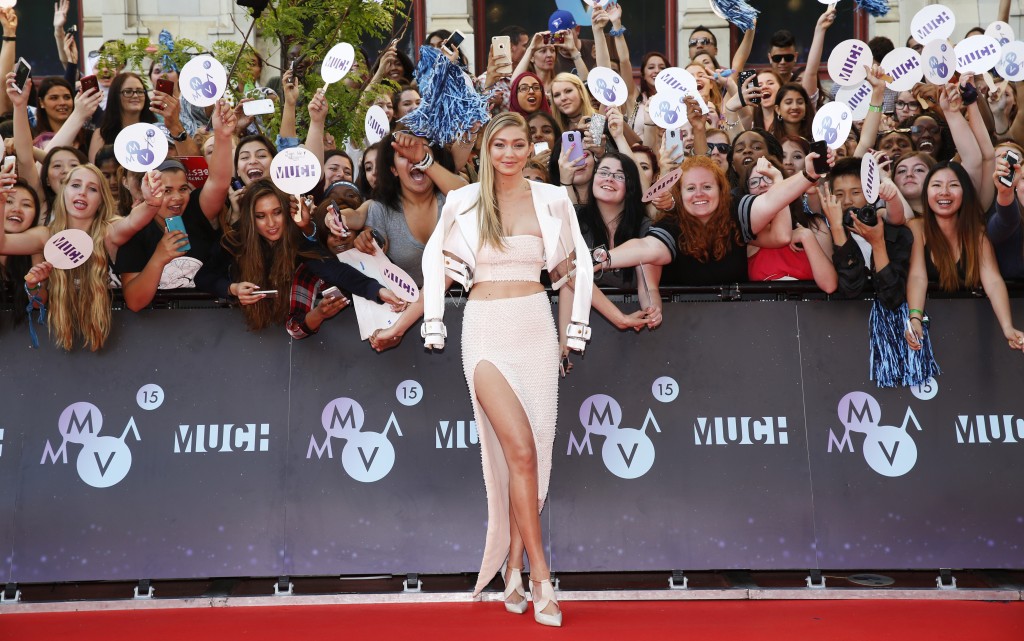 “I try not to make a single goal because then you can get tunnel vision… sometime it closes doors that would have otherwise been opened if I just had an open mind. I just have three goals – have fun, make a friend and be nice, and work hard – and those things are the things that make relationships and open opportunities that wouldn’t otherwise be known about and you make an interesting friend out of it,” she says of her business strategy.

Naturally, later mentions of Ruby Rose turned to Orange is the New Black banter. Apparently, if Hadid could be on any show, it would be her first choice.

“I guess it would be funny because I would be like the awkward Malibu girl in jail, that would be so weird….I would go so badass in jail. I would be the first one to escape on the show,” she said.

As for Drake, the rapper made a surprise appearance, and was spotted casually strolling backstage. I wasn’t the only one who was excited to see him.

“It’s cool seeing people in real life who you see on TV. Like, seeing Drake walk by is pretty exciting. You know Drake – we’re big fans of Drake – and I’m half Jewish from Toronto and Drake’s half Jewish from Toronto and I have a bunch of friends that went to summer camp with Drake so if I see him in the hallway, I’ll be like ‘do you know Ari Schulman? Me too,” said Max Kerman of recent Juno winners, Arkells.

Adam Lambert also stopped to chat in the pressroom. If you weren’t a fan of “What Do You Want from Me,” you may be of his new music.“It’s a new sound for me. It’s a bit more contemporary that anything I’ve ever done. We’re borrowing from some deep house sounds that are really popular right now. Some of the production is a little bit urban-leaning as well,” he says of his new album. 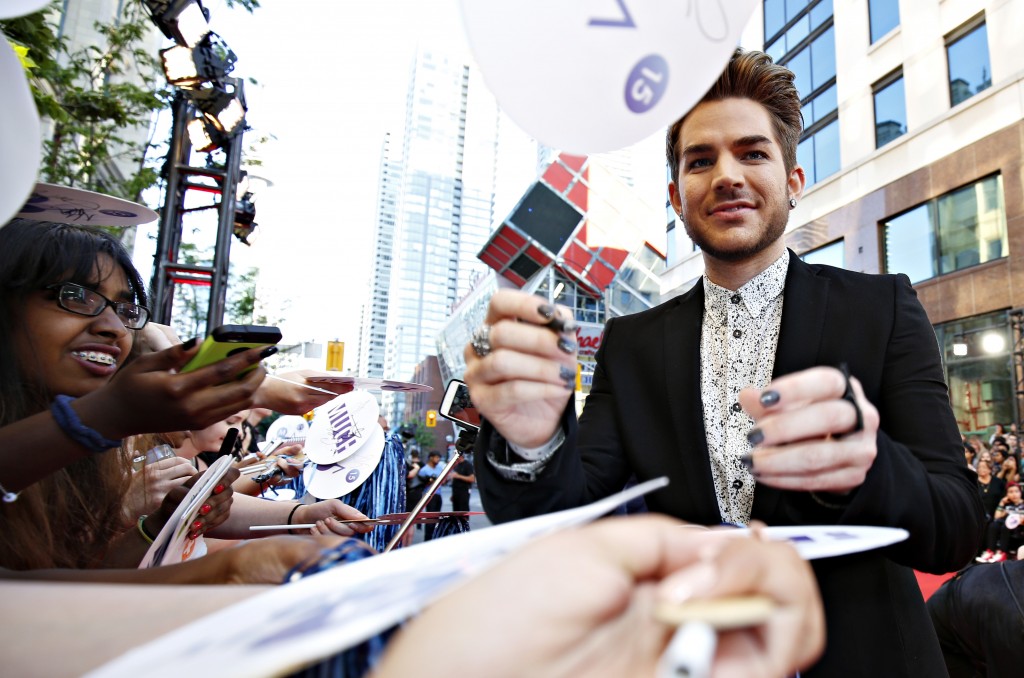 Lambert also recently toured with the remaining members of Queen, acting as the frontman – no pressure, right?

“I talked to Brian and Roger and wanted to make sure that we kind of had a nice balance between paying respect to the original recordings and the intention of the song in the first place. At the same time, I wanted to make sure that I was putting myself into the music and not just copying Freddy. I figure that would have felt sacrilegious and a little disrespectful almost to get up there and treat it like an impression. Finding that balance between old and new was a little tricky but we figured it out in rehearsal and I feel really good about it,” said Lambert on taking over Freddy Mercury’s role.

If you’re in the market for a new playlist this summer, you may want to check out the talent bred in our own backyard. 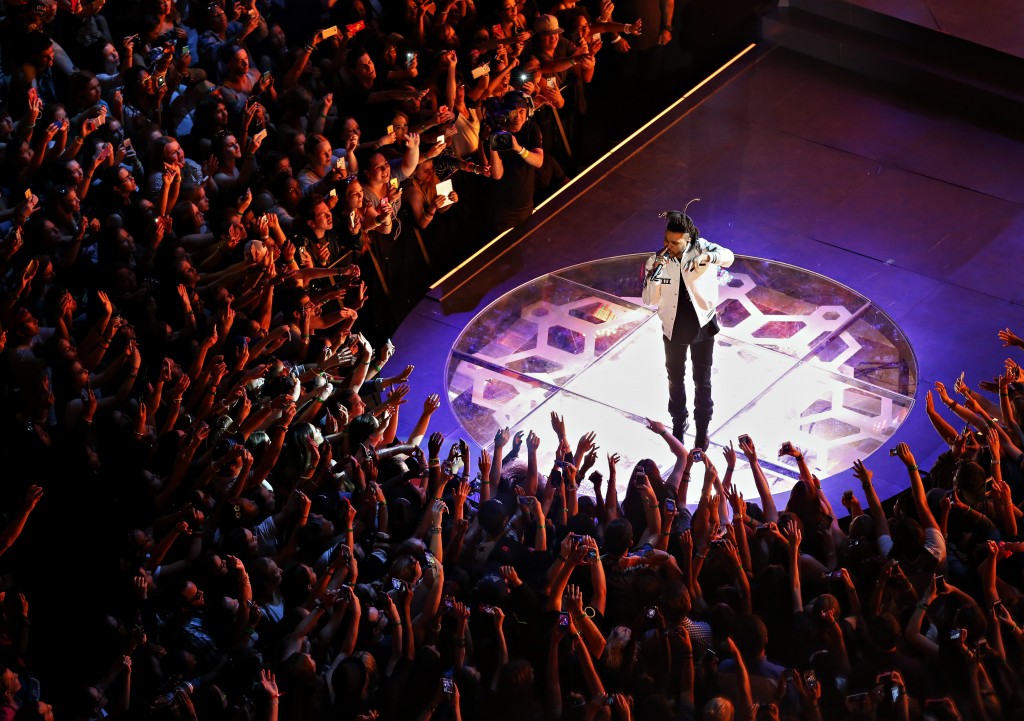 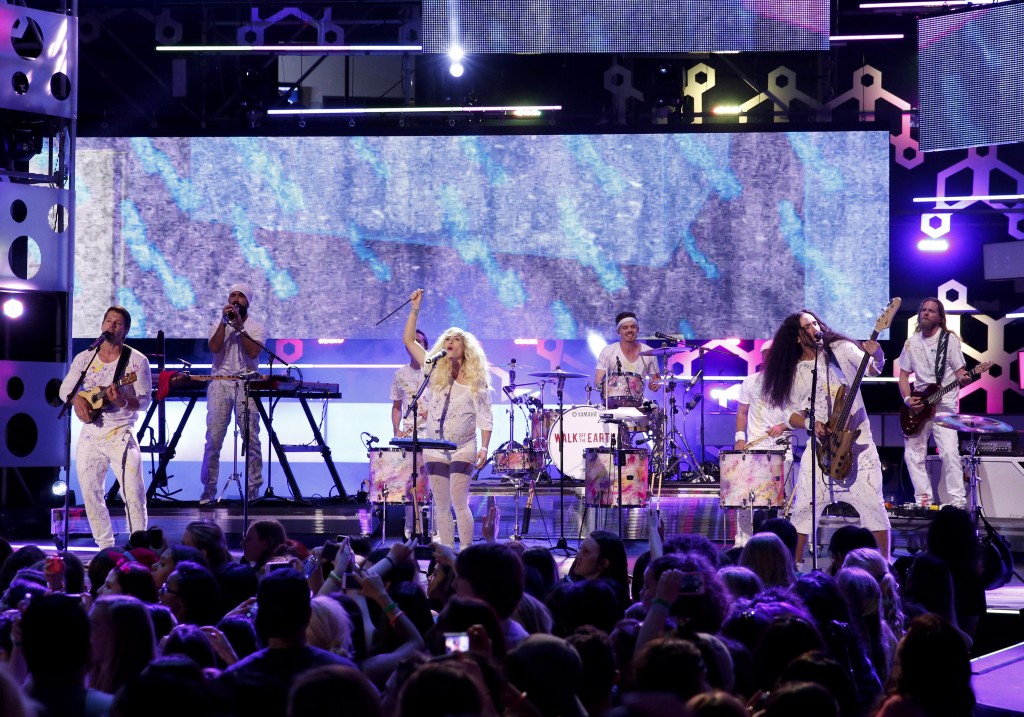 All photos courtesy of Bell Media