Every so often, you come across something so tone-deaf, so obviously offensive, you wonder who in their right mind would approve such a thing?

Well, this ad is one of those things.

Created by Robbie Picard for his Alberta oilsands advocacy group, it uses “hot” lesbians as an argument for supporting Canadian oil because logic.

“In Canada lesbians are considered hot. In Saudia Arabia if you’re a lesbian you die!” reads the ad posted by the Canada Oilsands Community, next to a photo of two women kissing. 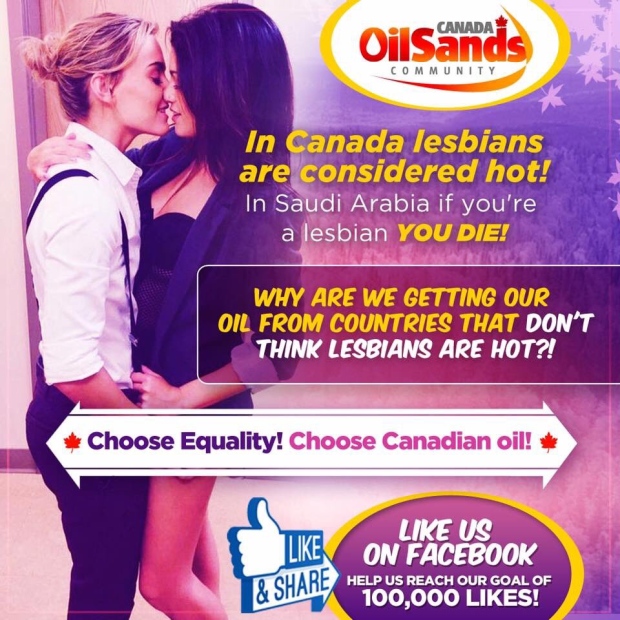 Side note: does anyone else think these two ladies bare more than a striking resemblance to Piper and Alex from Orange is the New Black? Just me? Well alright then, back to the story.

The post, which has now been taken down, was shared more than 1,000 times and, as you would expect, received a shit ton of negative feedback.

“I am a person, not a piece of pornography to be applied to whatever marketing BS you’ve come up with,” one woman wrote, as reported by Metro Edmonton.

In response to the backlash, Picard initially stood by his provocative post.

“If this draws attention that we are getting fuel from countries that butcher gays and lesbians — I mean, butcher them, hang them, publicly beat them —  then I’m OK to take a few shots if that means it draws attention to the bigger issue,” said Picard to the CBC.

However, it seems he has since changed his tune.

Last night, the advocacy group posted the following statement on their Facebook page:

“I apologize for the poster I posted. It was not my intent of demeaning women or any people of any sexual orientation. It’s[sic] was rather to highlight injustice done by other countries we are purchasing our oil from. I certainly don’t want to divide our community I believe in equality and human rights.”

The response to the apology has been mixed.

“Hats off to the creator, sometimes the truth hurts,” said one man.

At the end of the day, the intent of this post was to ruffle some feathers, which it clearly did. But let’s be real, the ‘hot lesbian’ trope is lazy and just plain gross. Let’s all collectively agree to leave this kind of sexist and homophobic humour in the past where it belongs.