It’s incredible how much can change in just 50 years.

The Pew Research Centre has crunched some numbers to illustrate just how much we Millennials differ from our grandparents, measuring everything from marital status to the likeliness of going to war.

In reporting on the societal, cultural and economic shifts over the past half century, the analysis speaks of “a period during which Millennials have become more detached from major institutions like political parties, religion, the military and marriage,” while “at the same time, the racial and ethnic makeup of the country has changed, college attainment has spiked, and women have greatly increased their participation in the nation’s workforce and their representation on college campuses.

Though the report considers American generational trends, one can expect, with the exception of military veteran statistics, that the numbers closely reflect what’s happened here in Canada as well. It uses four generations for comparison – Millennials (ages 18-33), Xers (ages 34-49), Boomers (ages 50-68), and Silent (ages 69-84).

The starkest differences, of course, can be observed between today’s Millennials and their grandparents, the Silent generation, who are now in their 70s and 80s.

3. The job market for Millennials is considerably more difficult than it was for all other generations.
A consistent 78% of men in the Gen X, Boomer and Silent generations were employed at ages 18 to 33, a share that dropped 10 points to 68% among Millennial men.

5. We’re much more likely to be of an ethnic or racial minority today.
Large-scale immigration, the rise of racial intermarriage, and differences in fertility patterns across racial and ethnic groups have contributed to Millennials being more racially and ethnically diverse than prior generations.

6. Young men of the Silent generation were 10 times as likely to be veterans in 1963 than young Millennial men are today.
Among men, only 3% of Millennials are veterans, compared with 35% of Silent men.

7. There are way more of us.
There are 68 million Millennials in the United States, compared to just 26 million members of the Silent generation. In Canada, Millennials became the biggest generation in the workforce last year. 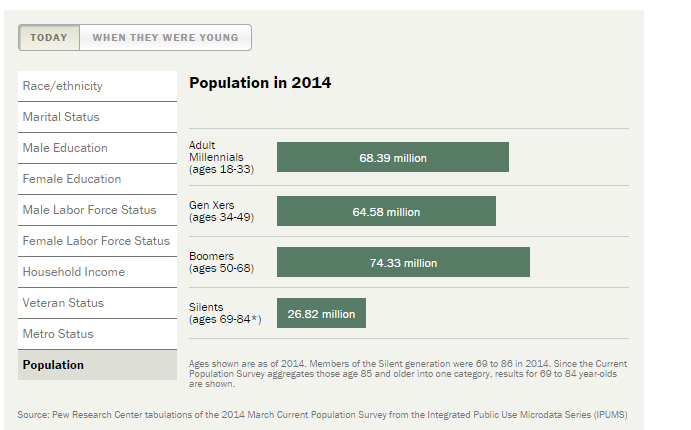