The May issue of InStyle is the official launch of bathing suit cover season and Amy Schumer is grandmaster 2017. 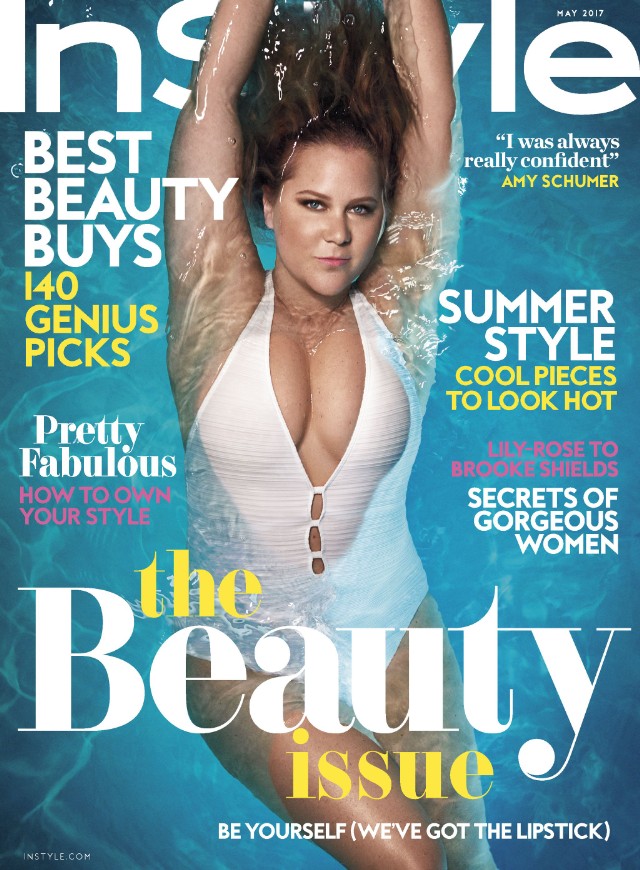 The world is suffering major political, social and economic warfare but Amy Schumer is still making headlines, and we cover body positivity at Notable Life so…here we are.

Amy Schumer is on the cover of InStyle’s May issue, wearing a white swimsuit which doesn’t appear to be going see-through in the water — the #1 fear of every woman who has chosen (i)not to buy a white swimsuit in the past.

Some highlights from her interview

I’m good-looking enough that I can work in the business. I get enough attention from men that I feel good. I see pictures of myself now, and I look younger than I think of myself.

My parents made me think I was a genius supermodel, and it was kind of too late when I found out that they had been lying. But I was always really confident, though there have been bumps in the road. During freshman year of college the girls at the school were just so much hotter than me. I couldn’t compete, and I lost all my self-esteem. I was confused about where my value lay, and then I figured it out.

On keeping it real:

I’m realistic because if I look my absolute best and go to an awards thing, I’m still going to be seated next to Blake Lively or Emily Ratajkowski. So that can break your heart or you can be like, “This is pretty good. I’ll take this level.”

The men in the office think Schumer’s midsection is Photoshopped but the women don’t feel it has been. The women feel like her arms are the best body feature in the photo because they look strong and realistic instead of the norm on most covers — sinewy. All of Schumer’s body parts look nice and good but it’s not somebody’s individual body parts that send a body positive message to women.

Compared to when we were young girls, there is now more body diversity on major magazine titles. It’s a step in the right direction. Now we need more racial and age diversity to call this movement a real and powerful change.

The InStyle cover isn’t stunning or artistic, or timely, or representative of anything else happening culturally in North America except for a mass media move towards more body size diversity.

So, for that reason, well done, InStyle and Amy Schumer.