While Canada Day might be a few weeks behind us, we thought it was worth giving you one more reason to love this great country of ours: we have the best bar in the world. And you guessed it:

John Max Sports & Wings is owned by John O’Kane and a few weeks ago, he arrived at the bar at 7am. In the venue’s parking lot were four cars; they appeared to have been left there overnight by patrons who had kicked back more than a few pints the previous evening.

All too often, what usually happens next is that somebody quickly gathers their life’s frustrations and any remaining morsels of self-importance, and then spews them out at the world in the form of a phone call to a towing company. Thankfully, O’Kane did the exact opposite.

He wrote 4 letters thanking each car owner for the responsible decision they may have made to not drink and drive, enclosed with each letter a $20 gift card and a voucher for two free hours of beach volleyball, and then put the letters under the windshield wipers of the cars.

A patron named Scott Defoe got one of these letters, immediately posted it to Facebook, and the awesomeness has been going viral ever since. 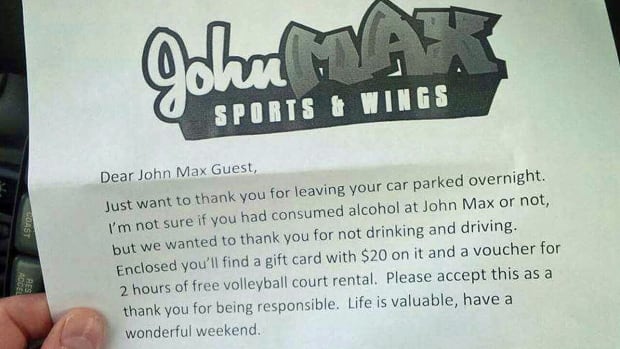 “Just want to thank you for leaving your car parked overnight. I’m not sure if you had consumed alcohol at John Max or not, but we wanted to thank you for not drinking and driving. Enclosed you’ll find a gift card with $20 on it and a voucher for 2 hours of free volleyball court rental. Please accept this as a thank you for being responsible. Life is valuable, have a wonderful weekend.”

“I had the time and I decided to write the letter and thank those guests,” said O’Kane. “I just wanted to throw a thank you their way with a gift card and no strings attached…I’d be happy to work with the Windsor police or anybody who wants to work with me in just doing a small part in not drinking and driving.”

Apparently the letters were his wife’s idea after seeing a related post on Pinterest, which may have been inspired by Duffy’s Pub in Kamloops doing the very same thing a few months ago.

So make that the two best bars in the world.

“He’s portraying a message of being safe and not driving impaired,” said a representative from the Windsor chapter of MADD. “…he’s promoting safety. It’s definitely a good thing, for sure.”

Um, ya. You can slur that again.