“It’s a classic!” says your friend, defending their terrible 90s music choice, to a chorus of groans.

Well now there’s a way to prove that a love for Limp Bizkit or Hanson is far from universal. Spotify, curator of bands and musicians old and new, has provided a jumping off point for one website to scrutinize our evolving musical habits.

Polygraph-co, a “publication for thoughtful, data-driven storytelling” examined two points of song data – popularity at time of release on Billboard and popularity (amount of plays) on Spotify today – in an attempt to analyze how our love for music has changed over time.

To put it simply, “This is a story about proving, with data, that No Diggity by Blackstreet is timeless.” 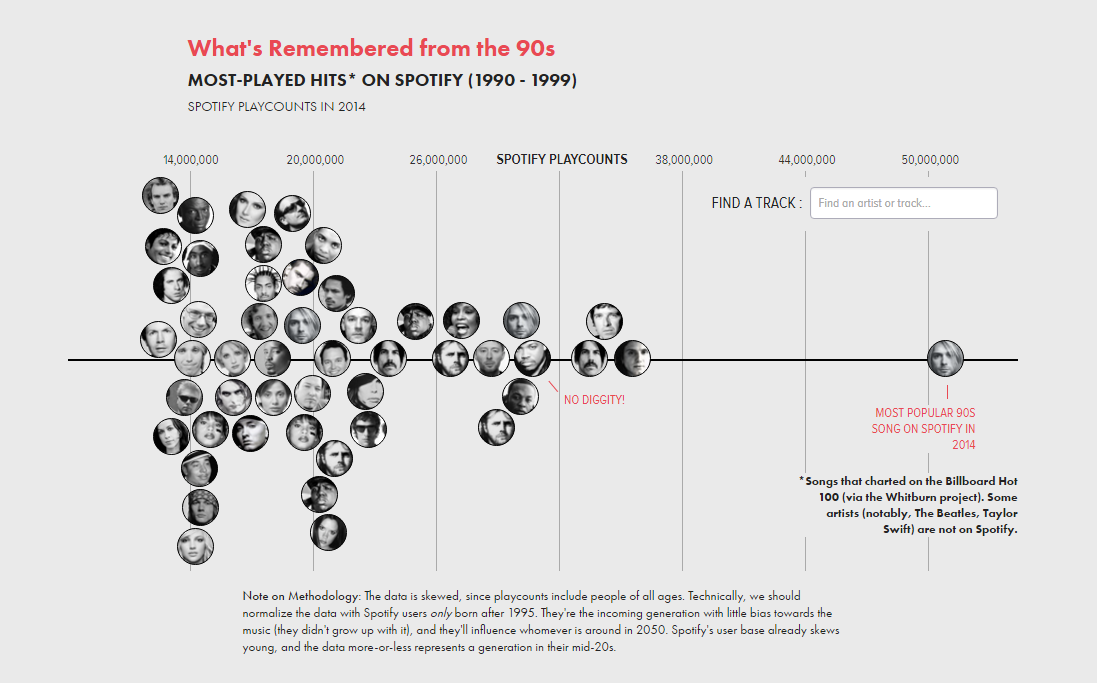 A screenshot of one of the graphs

And let’s just say, the data is fascinating.

Songs that we thought would earn their place in the musical hall off fame have fallen by the wayside; meanwhile others that flopped compared with their chart-topping counterparts have gone on to enjoy modern day popularity.

The most popular 90s song on Spotify is Smells Like Teen Spirit by Nirvana with an impressive 50 million plays. But despite it’s timeless status now, as an iconic beacon of the grunge era, it never reached the Billboard Top 5 when it was released in 1991. And in terms of yearly rankings, there were 41 songs that were more popular that year – but that doesn’t mean we’re still singing in our living rooms to “I’m Too Sexy” by Right Said Fred.

But on a ranking of present-day popularity by Spotify play counts, it’s Eminem, The Killers and Linkin Park that lead the charge – despite it including every billboard hit from 1950-2005. Nothing obvious seems to link the top three (who have over 50 million plays each), except their proximity in release dates, between 2002-2005.

Is it a millennial #tbt when we were all young, ‘rebellious’ and listening to these artists on our Discmans?

And while we can’t look into the future – data does show how just after a few short years some of the most popular music has dropped off a cliff from 2013. After a huge spike in April of that year, Get Lucky by Daft Punk has plummeted to a quarter of plays in 2015, proving that longevity is a mysterious and unquantifiable beast.

As author Matt Daniels points out, “it will be weird to hear future generations reverently listen to groups such as Nickelback – the kids only know their music, not what they culturally stood for in 2015.”

Anyway, for now, these are the ten most timeless 90s songs of, well, all time:

4. Under the Bridge by Red Hot Chili Peppers

5. No Diggity by Blackstreet

6. Come as You Are by Nirvana

10. I Will Always Love You by Whitney Houston