The key to a happy, long-lasting relationship? Simple: communication and orgasms.

Who’d have thought it? Well, everyone really.

According to the Wall Street Journal, academics publishing their studies on sexual satisfaction in long-term relationships in the Journal of Sex Research later this month have come up with some information on what keeps couples happy.

And while it might appear to be a bit of a no-brainer, when we scratch under the surface of their findings it’s actually much more interesting – and important – than it seems.

Couples who consider themselves sexually satisfied are doing more than just the missionary position. They’re trying out lots of different sex moves, communicating about what they want and enjoy, and giving each other orgasms time and time again – which when you look at the figures is no easy feat.

In 2006, MSNBC.com posted a survey for two weeks and then analyzed the answers of almost 39,000 married or cohabiting heterosexual men and women who had been with their partner for at least three years.

Individuals rated their current satisfaction on a scale of one to seven and also their sexual satisfaction in the first six months of the relationship.

The first discovery the survey found was that you’ve got to be in it to win it – in other words, those satisfied with their sex lives were having sex with their partner more than those dissatisfied. Extrapolate from this that practice makes perfect and suddenly it’s not so much of a duh that an orgasm scores highly on the list of fulfilled individuals.

Although the study’s author, David Frederick, was unsure about the whole chicken and egg scenario of what comes first (pun not intended), sexual satisfaction or frequency, what the study can tell us is the predictors of it.

There were five types of communication important to sexual satisfaction. They were, in order:

In terms of setting the mood, the most common communication tool between the satisfied men and women involved those three little words.

75 per cent of men and 74 per cent of women who claimed to be satisfied said ‘I love you’ during their last sexual encounter. Compared to the 49 and 44 per cent respectively of dissatisfied men and women, this was what differentiated the two groups of couples the most. 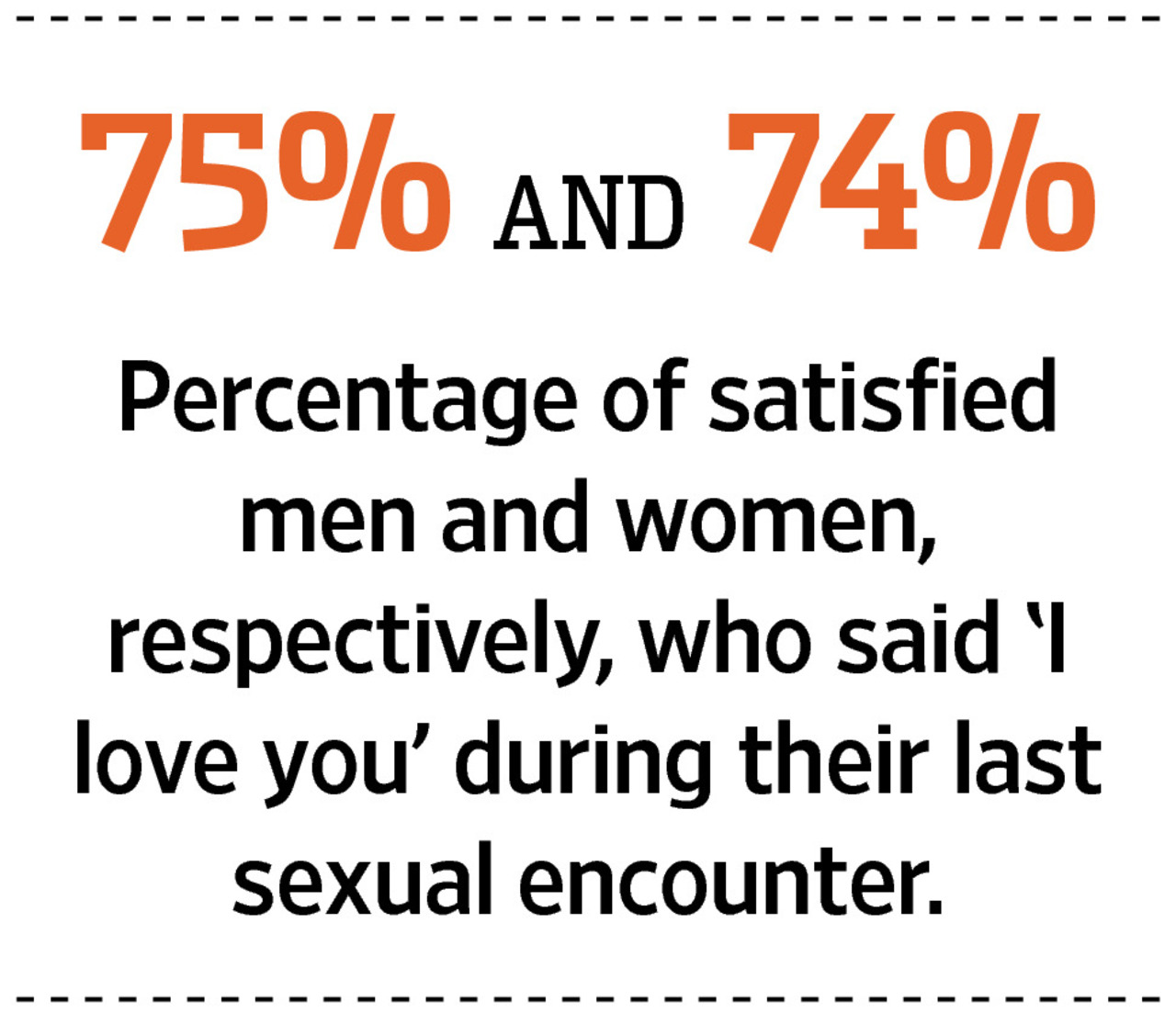 This was followed by sexy talk, laughing about something funny happening during sex, lighting candles, dimming the light, or playing background music – all of which helped set the mood.

Perhaps most interestingly were the top acts that led to a satisfying sex life. Men and women agreed that trying a new sexual position was the most important. The rest was the same for both but the order differed slightly. Next up for women was taking a bath or shower with their partner, getting or giving a massage, incorporating sexy lingerie into their sex life, and talking about or acting out sexual fantasies. For men, lingerie was second most important, followed by showering or bathing together, their fantasies, and massages.

It’s interesting that something like lingerie, which we deem as primarily a male obsession, reserved for birthdays and Valentine’s Day, was a key factor in a substantial relationship for men and women. 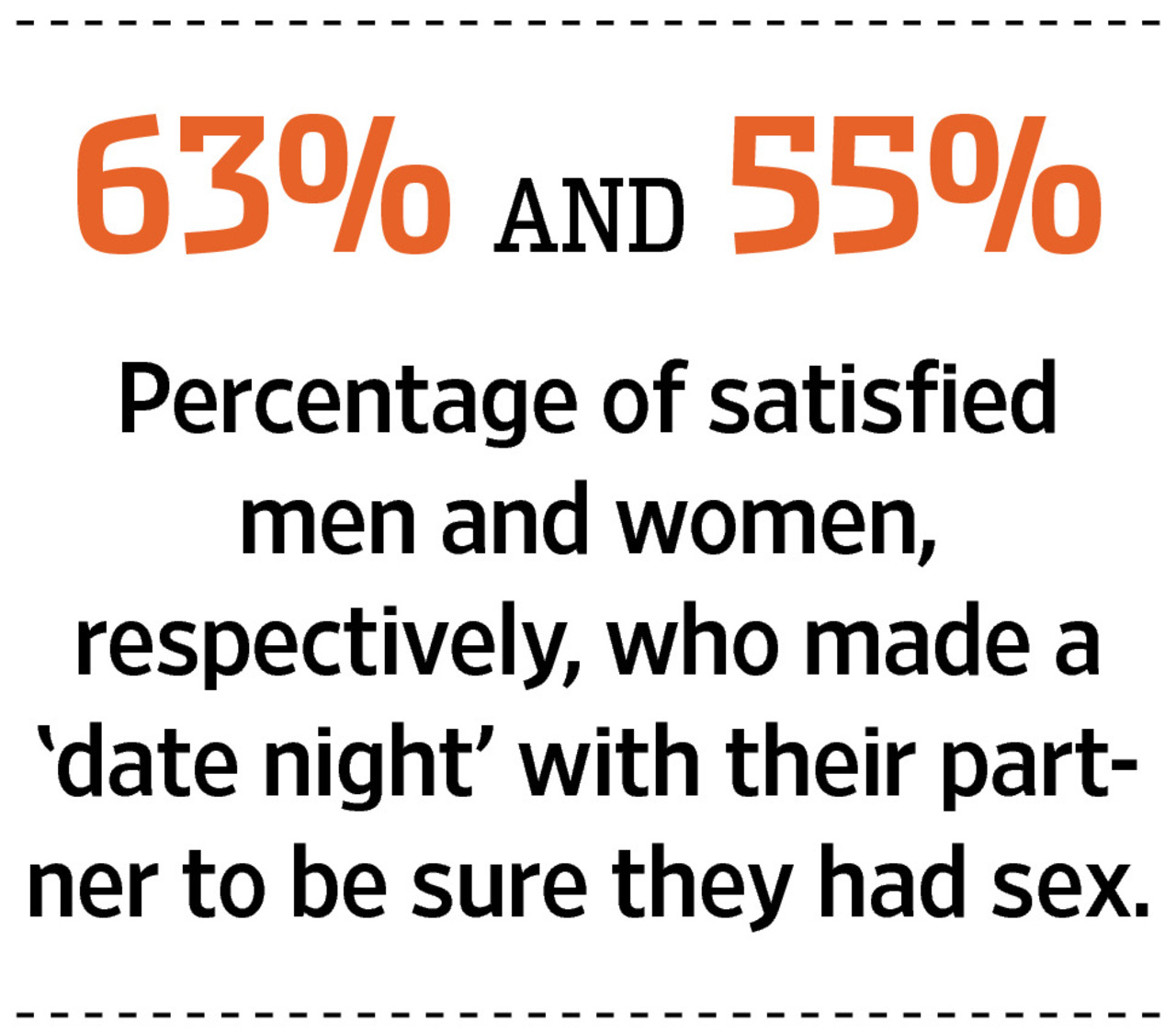 Of course, this isn’t a checklist to happiness. We can’t synthesise chemistry with another human being by simply having sex twice a week, laughing uproariously midway through it and giving our partner a shoulder rub in the tub.

But if you have someone who you naturally want to do those things with (and more), don’t just scoff that the study is obvious and simplistic; question if you’re really doing them all. And if it was really that obvious, why were only 43 and 55 per cent of the individuals reporting satisfaction in their relationship?

You’d be surprised how many people let talking and orgasms slip by the wayside – and if you’re busy taking your communication skills for granted, you never know who could be in that discontented 41 or 27 per cent.