With a mass audience constantly at our fingertips to offer a sympathetic comment or to toss us a “like,” it’s tempting to want to share frustration, anger, and negative opinions (and accompanying videos) of someone else on social media.

So much so, in fact, that “social media shaming” has gone from buzz term to fact of life.

Yesterday, I discovered that a married man who had tried to play me for a fool a few years back was running (again) in a political campaign. In a moment of immaturity and spite, I wondered what would happen if I posted an article I had written on the whole experience on the wall of  his Facebook campaign page.

In doing so, I could ruin his life. It could shatter his marriage and diminish his chances of being elected. He could lose friends over it. His whole Christmas season would be brutal. And all it would take would be a quick few clicks.

I didn’t do it, nor was I seriously considering it, but it definitely got me thinking about the whole concept of social media shaming.

In an age when our smartphones have become extensions of our bodies, we’re increasingly held accountable for our actions. That’s because anyone with a smartphone has become an amateur detective/videographer and any bad behaviour caught and recorded is available for scrutiny in a social media trial. When there are dozens of camera phones in close proximity at any given time on our city streets, concerts, and sports arenas, we’ve learned that if we act like an asshole, odds are that it could end up on social media.

We see it happen practically every time we refresh our news feeds.

The thing is, whether it’s the product of too much alcohol, pure rage, or utter frustration, we’ve all said and done something at one point in time that we’re less than proud of – even if it was just that once. You know, those moments when you’d never want anyone to see you, let alone have it documented and spread around on social media. By now, I don’t have to tell you that social media shaming has held very real consequences on the lives of those affected. It has resulted in lost jobs, severed relationships, reputations that are ruined beyond repair, and even suicide in some cases.

People are literally paying for lapses in judgement with death. Either that, or they’re being punished for one bad decision for the rest of their lives.

Yes, some people 100 per cent deserve to be shamed on social media (to some degree) and to experience the subsequent ramifications. For example, most will agree that the men who interrupted a female reporter’s live broadcast at a TFC game by shouting sexually explicit things in the background deserved the ensuing social media shaming (complete with no shortage of name calling) and accompanying loss of his job. Similarly, it was kind of hard not to express anger at Walter Palmer after he shot and killed Cecil, Zimbabwe’s famous and beloved lion. 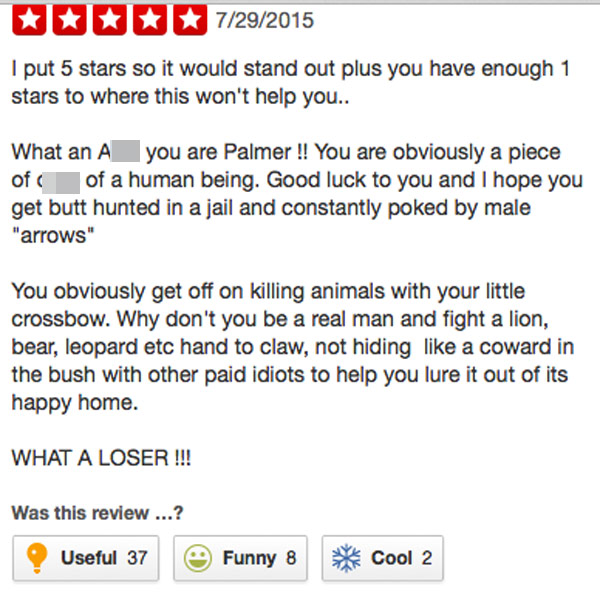 But other cases aren’t so black and white.

Back in January, what became a viral video of a grown woman having a temper tantrum at the BC Ferries Terminal after missing her ferry raised another incredibly important point when it comes to social media shaming. Once the video began to circulate, it didn’t take long for some to suggest that the woman possibly suffered from mental health issues and was experiencing a mental health episode. And maybe she was. She could have also just received tragic news and was simply trying to make her way home in a fragile emotional state.

The point is, we rarely, if ever, know the proper backstory before we react.

Last week, a Toronto man shared a post, complete with pictures, of another man who allegedly kicked his dog at a local dog park because the dog barked at his dog. Not surprisingly, his friends and friends of friends jumped behind the cause, sharing the status and the accompanying pictures of the man to viral proportions. Kicking a dog is never cool, after all. Well, apparently, the dog-kicker got wind of the whole thing and confronted the other guy the next day in the dog park, threatening to sue for slander. Because there wasn’t video documentation, the only people who knew what went down in the dog park are the ones who were there. 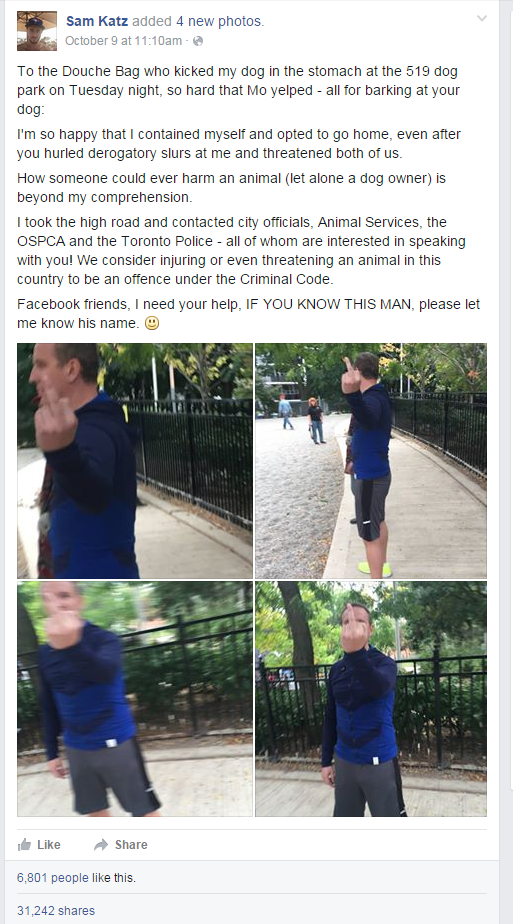 While the man may very well have maliciously kicked the dog, it’s important to keep in mind that there are two sides to every argument, confrontation, and love story gone wrong. For example, one comment on the post claims that a friend of his had spoken to a witness and the man who was “vilified” was only trying to protect his dog.

Hypothetically speaking, a man could post evidence on Facebook of his wife’s adultery, making her look like the worst person on the planet. His friends and family would likely chime in. If the post was witty enough, it may even go viral, like many cheating tales have before. The thing is, that same man could be beating, controlling, and verbally abusing his wife on the regular and the affair was her way out.

In terms of social media shaming, it’s important to really, seriously consider the ramifications of your actions. Sure, exposing the cheaters on Ashley Madison was a positive thing for some. But it resulted in multiple suicides and subsequently shattered families. It’s also important to consider your reason for sharing a post that’s already become viral –  what is your reasoning behind it? And is the “villain” deserving of the consequences, which can include verbal abuse and bullying? For example, I’ve seen people shamed on social media for wearing a questionable outfit.

In the coming years, it won’t be too shocking if we adopt stricter libel laws, privacy rules, and criteria when it comes to exposing, shaming, and outing people on social media.