Canada’s CEOs: making as much money in a day and a half as you do in an entire year.

Nevertheless, many company leaders are revered by their underlings, as evidenced by Glassdoor’s annual Employees’ Choice Awards.

The ranking is determined through input by employees who voluntarily provide anonymous feedback about their CEOs performance and work environment.

Canada’s top CEO is Dr. Lisa Su of AMD. Su is the first woman to top the ranking and boasts a 99% approval rating among employees. Keg Restaurants’ David Aisenstat was voted Canada’s second0best CEO, also at 99%, while Yves Guillemot of Ubisoft rounds out the top three.

These are Canada’s 9 top CEOs: 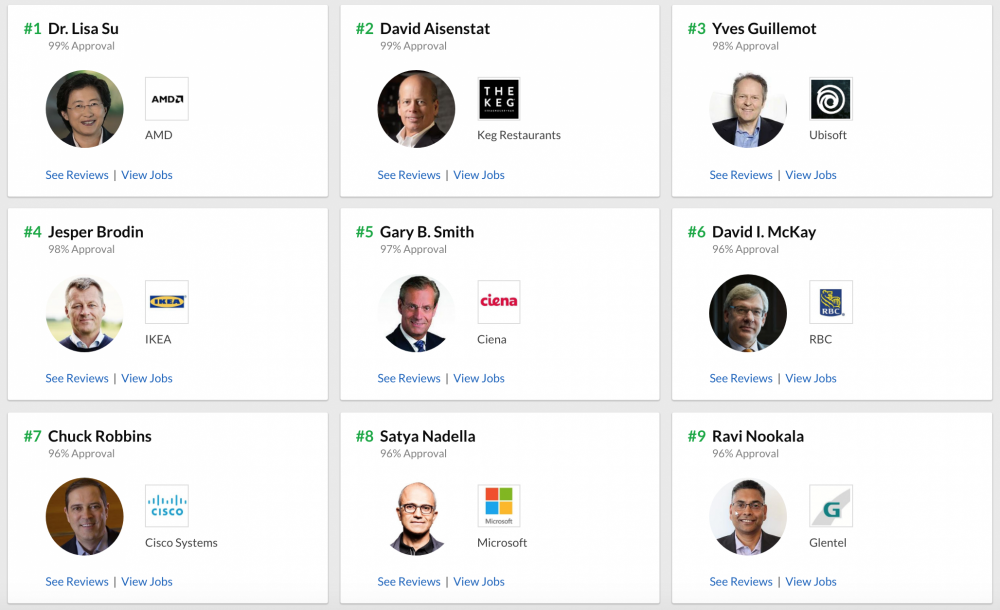 “It’s an honor to recognize incredible leaders who, from their employees’ perspectives, exemplify exceptional vision, trust and communication. Glassdoor’s Top CEOs award continues to be more competitive every year, and I congratulate each leader on their achievement,” said Christian Sutherland-Wong, Glassdoor president and chief operating officer.

“Today’s job seekers are looking for leaders who share their values and will empower them to bring their full selves to work. More and more, we’re seeing Top CEOs make decisions to shape the culture of their organizations to help recruit and retain quality talent, which has a direct correlation to fueling business success.”

The list includes CEOs at companies which employ at least 1,000 people. Around 900,000 employers were reviewed on Glassdoor, with an average CEO approval rating of 69%.