Mackay Taggart is a 28-year-old producer of Global Television’s soon-to-launch The Morning Show. He’s been working in media for near 12 years, and continues to be passionate about the power of messaging and media’s ability to bride gaps and create a globally-informed community. Find out more about this Dalhousie poli-sci grad in today’s YPDaily.

Elevator Pitch: Describe your job in a nutshell.
I’m a producer with Global Television’s The Morning Show, launching in Toronto on Oct 11th. My role is a catch-all when it comes to what makes it onto the show. I help ensure that our content reflects what matters to our audience and our hosts have everything they need to make the show pop.

Why did you start working at your company? What was the inspiration for this career route?
I made the jump to TV earlier this summer after six years producing talk radio in Toronto. I’ve always been a news junkie, I’ve always been curious, I’ve always been hungry to know things before other people. I started interning in radio when I was 16 and never looked back.

What is the best part of what you do on a day-to-day basis? The most challenging part?
There are a lot of “best parts” of the day; they usually involve landing a great guest or seeing a segment executed in a way that really connects with the audience. We live in a large, sprawling city. It’s an awesome feeling to know that local media helps shrink it a bit by bridging ideas and information. The most challenging part of producing morning radio or TV is, undoubtedly, the 3:30am wake-up call.

Where do you see yourself in 5 years?
The way people consume information is changing. While the impact of different mediums might alter, audiences will always be thirsty for compelling content. I hope, in five years, to still be working in a capacity that brings information to people in new and inventive ways.

What does success look like to you?
Waking up every morning excited to go to work, and being even more excited at the end of the day going come to good friends and family. Success also looks like a killer new TV morning show that beats in the ratings shows that have been in the market for years.

What is the most memorable milestone in your career?
I think I mark career milestones via the different news events I get to cover. I remember standing on the steps of the US Capitol building on the morning of President Obama’s 2009 inauguration. As the sun rose over the National Mall I began to be able to make out the million-plus people who had come to be witness to the event. Moments like that help you take stock of your career and the unique opportunities a job in media provides. 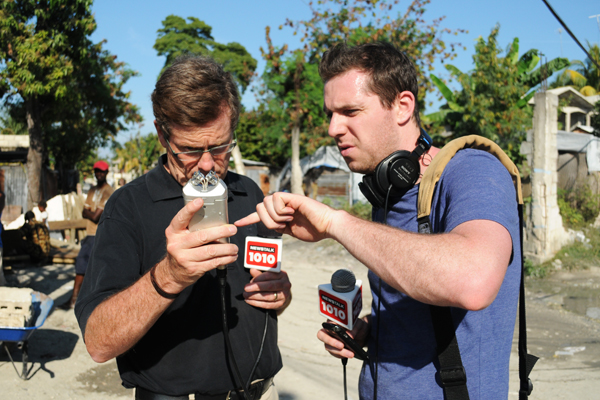 Do you have any advice for other young professionals?
Learn as much as possible from the people in your field who have come before you. I think our generation brings to the work-force an exciting passion for reinvention, but occasionally this comes at the cost of what works.

Do you support any charities? If so, which one(s) and why is that important to you?
In 2008 I took a year long leave from Toronto radio to work with the NGO Journalists for Human Rights in the West African country of Sierra Leone. It was a phenomenal experience through which I gained an intense amount, not the least of which being a renewed appreciation for the power of media. Since returning to Canada, I continue to fundraise for a local school in Sierra Leone that focuses on providing education to children of disabled parents, while teaching self-sustaining economic development skills to the parents.

What to you is notable?
Big ideas and the people who have ability to put them into action.

Blackberry, iPhone, Android, or Other?
Blackberry by day, iPhone by night…I’m one of those dolts who often walks around carrying two phones.