Living in Toronto, you hear a lot about the outdoorsy West Coast lifestyle.

If you ever find yourself in Vancouver, you could grab a green smoothie and take a hike through Stanley Park to get a little taste of it.

But if you really want to live like a local, you now have the option to sleep in a van on the street for 60 bucks a night. 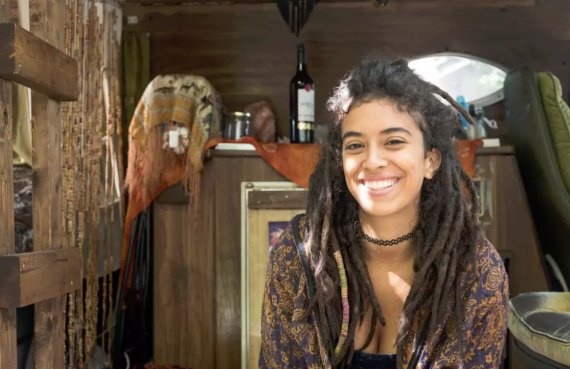 This is Luna Mammon, owner of “Moonbeam,” the 1980 Dodge Ram camper she lives in and rents out on Airbnb.

She bought the van this summer after returning from travelling abroad, partly because she’s a minimalist and also because of Vancouver’s notoriously expensive housing market.

Renters certainly won’t be living large in Luna’s hippie van – it has a double bed, a top bunk for storage, an overhead fan, and some kitchen appliances.

Oh, and there’s no bathroom. Mammon suggests guests use nearby coffee shops or the community centre to relieve themselves. Or in a pinch, her ‘pee jar’.

Surprisingly enough, having to piss in a communal vessel has not discouraged people from renting the van. 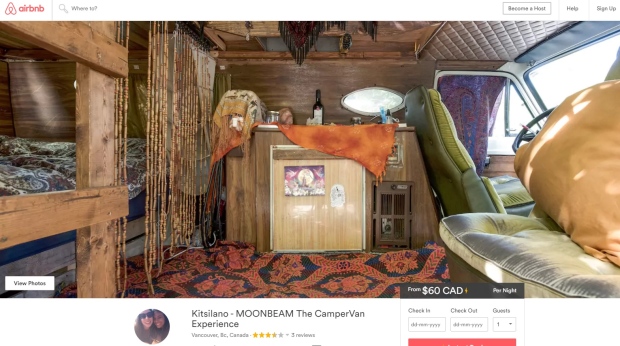 “The response has been overwhelming,” Mammon tells CBC News. “I’ve had to block some days on the internet as time for myself.”

Mammon’s van is also not the only non-traditional listing on Airbnb. A quick search on the site reveals listings for trailers, campers, and even a backyard tent. In fact, mobile living has taken off in recent years as nomads ditch the sky-high real estate market for a cheaper alternative.

Give or take a few potential legal issues – as CBC reports, you need a licence to conduct a business out of a vehicle on city property – the Vancouver van Airbnb life is perfect for those who crave a little spontaneity and wouldn’t mind making a few extra dollars on the side.