Another day, another damning report on Canadian housing unaffordability.

The Canadian Centre for Policy Alternatives has published an aptly-named report titled ‘Unaccommodating‘ which looks at how much Canadians need to earn per hour to afford a one- or two-bedroom apartment in Canada’s urban centres.

Affordability is determined by something called a ‘rental wage’ – the hourly wage that a full-time worker must make to be able to rent an average two-bedroom apartment using no more than 30% of their income.

Let’s start with the macro. Canada’s average rental wage for a one-bedroom apartment is $20.20/hr. For a two-bedroom, the rental wage is $22.40/hr. Not terrible, but that essentially means someone working minimum wage full-time will be scraping pennies by the time rent’s paid.

It’s in the cities that the findings become particularly grim. “There are 117 neighbourhoods in the Greater Toronto Area (GTA), but in none of them could a full-time minimum-wage worker comfortably (and in many cases uncomfortably) afford either a one- or two-bedroom apartment,” concludes the report. 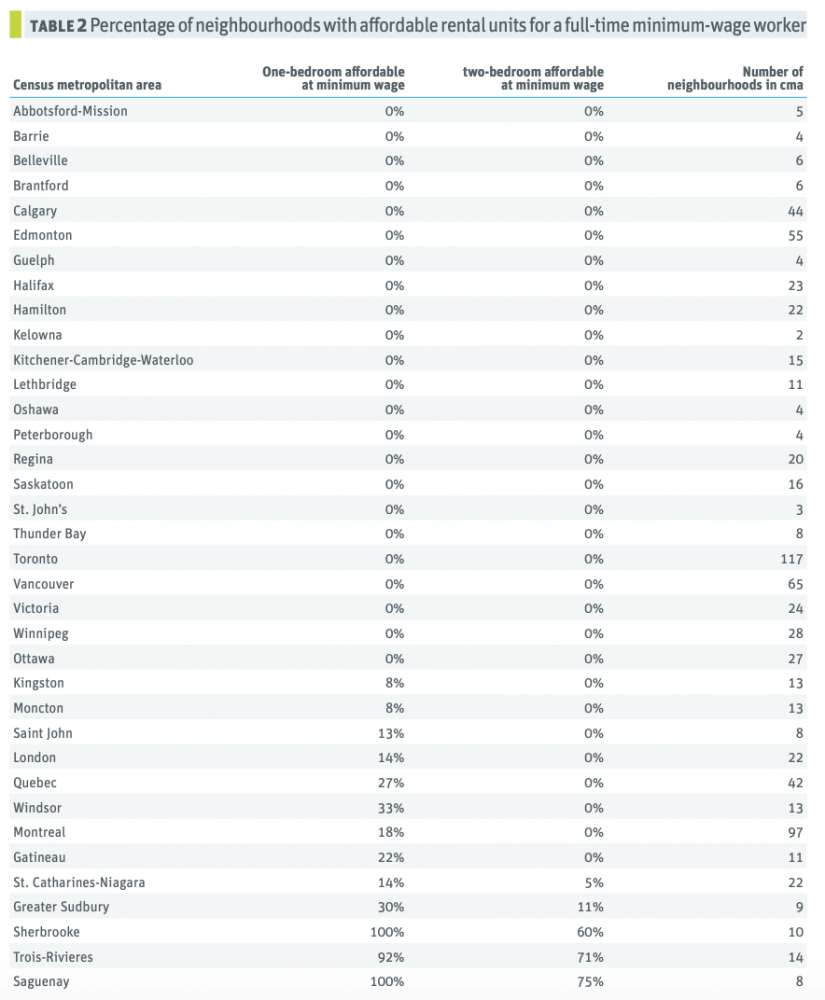 Overall, Toronto is home to the country’s most unaffordable housing rental market. Someone living in Toronto needs to earn $27.74 an hour – or work 79 hours a week at minimum wage – to afford a one-bedroom apartment if they wish to have 30 per cent of their income left over for other expenses. The rental wage for Vancouver, meanwhile, is $26.72 – or 84 hours a week at minimum wage.

The numbers behind the hardship:

There are many factors at play that determine a city’s housing affordability – neighbourhood, number of hours worked per week, family status, etc – but the conclusion is basically the same: you should move to Moncton.