As a young professional, the economics of the doctor’s visit make that strep throat all the more difficult to swallow.

For simple follow-ups and prescriptions for routine health matters, people are missing hours of work commuting, waiting, commuting, and then waiting some more. Not to mention the painfully limited options of timely diagnosis and treatment outside of “regular business hours” and the pollution factor that comes along with the average waiting room.

Enter the world of Telemedicine and Virtual Care, the operationally efficient future of healthcare; using video conferencing, secure messaging, and other digital tools to connect physicians to both patients and critical information, anywhere and anytime.

The thing is, that future is pretty much already here – just not enough Canadians seem to know about it.

The broader concept of Telemedicine spans everything from general consultations to inter-physician collaboration and all the way to remote, ongoing digital monitoring of patients who have suffered serious medical incidents like heart failure. But from a day-to-day perspective, a basic use case is powerful enough to imagine…

Your eye is starting to look like mangled cherry. It’s 7pm on a Thursday and you’re not really in a position to leave the house for an indeterminate amount of time. Chances are, you have a basic case of conjunctivitis and all you need is a prescription. What do you do?

Well, in the world of virtual care, you could just fire up your smartphone, start a video chat with a physician, send them a high-res photo of your gnarly peeper, get a confident diagnosis, receive a digital copy of a prescription, print it and then walk to the closest pharmacy. Or even better, someone on the physician’s side of the chat could send the prescription off to the pharmacy for you, leaving you with the simple task of a pick-up.

The same goes for a disruptive skin issue, intense pain during urination, debilitating sinus congestion, or even a general follow-up for your bronchitis when you have a broken ankle.

QHR Technologies is a Canadian software company based on out of British Columbia that provides a platform called Medeo through which physicians across the country can have just those kinds of interactions with their patients; secure video chat, private messaging, and file sharing. The doctor licenses the Medeo software, the patient sets up an account, and from that point on, it’s health-centric Skype. 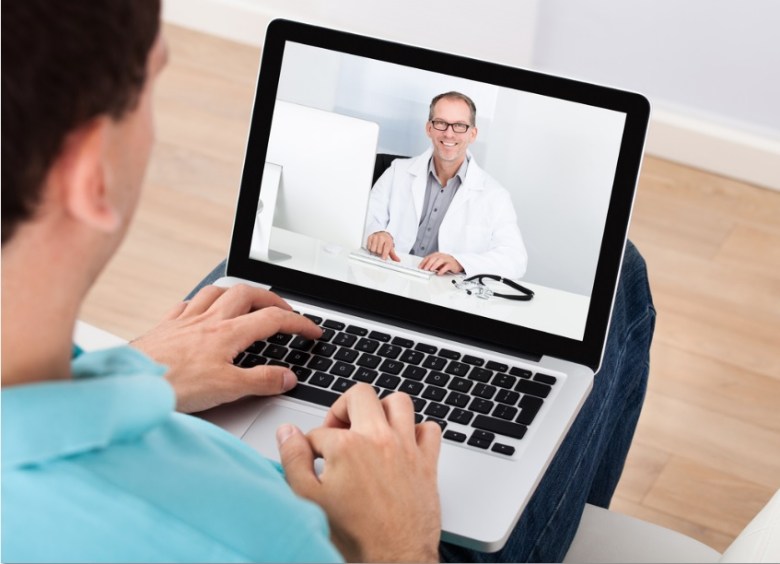 Equinoxe Life Care, through their BC Virtual Clinic, uses the Medeo platform to provide virtual care to thousands of people in underserviced areas and remote locations. By leveraging a pool of “shared” medical resources, they also offer support access to those without a personal, dedicated physician.

And it may or may not surprise you to know that a large percentage of people using virtual visits are using them to address mental health and sexual health issues; two areas of dialogue that seem to benefit greatly from a digital buffer.

“Doctors are saying that they’re seeing patients open up a lot more virtually than in person,” says Marc Faktor, the Head of Business Development for Medeo’s Virtual Care & Innovation division. “They’re seeing this ‘Virtual Care Effect’ come into play, as their patients tend to share more and feel more comfortable talking to them in the comfort of their own home, without the pressures that come along with an in-person visit.”

So why aren’t more people in this country using these types of services? There are several reasons, including slow technical adoption and limited faith in the prospect of remote diagnoses. And there is still much data to be gathered around the successes and failures that arise from healthcare complement of virtual care. But one noticeable barrier seems to be the structure of our system itself and how the services are marketed.

In Canada, the technology and the adoption of the service mostly flows from the medical community down, requiring the physicians, specialists and healthcare networks to build a user-base within their long-term or hospital-admitted clientele. So as opposed to a user-driven “concierge” model, we have almost entirely positioned a provider-driven onboard and follow-up model. That can be a lot to ask of a doctor.

One thing that could help with that going forward is a seamless integration and user experience between Electronic Medical Record systems and the communication platforms; if all of a sudden thousands of physicians could fire up a video chat from the same place they already access fifteen million patient records, adoption could see a big swing.

That kind of integration is something that Medeo, alongside their parent company’s Accuro EMR solution, is planning for release later this year.

But if you really want to see where something like this could go, take a look at some of the stuff our pals to the south are doing. As much as we rightfully pride ourselves on the relative strength of our medical system, the US is really killing it with this whole virtual care thing. Back in 2014, Deloitte estimated more than 75 million electronic visits to General Practitioners in North America, with the overwhelming majority occurring in The States.

There, they have web-based services like MeMD, where you can connect with any of their nationwide registered physicians and nurses for $50 per consultation (with insurance companies, in some instances, footing the bill). CHI Franciscan Health contracts out a company called Carena to man their virtual consultations, which are available at any time, to anyone, in eleven states in the US. And what is most illustrative of this model’s value is some basic statistics they recently disclosed in a New York Times article:

Most visits take place during the weekends or between 5pm and 8am, prescriptions are provided in approximately 40 per cent of the virtual visits and the most common diagnoses are respiratory tract infections, pink eye, and bladder infections.

It seems to makes sense that common issues like that, during “off-hours”, are ideally handled with a few clicks, a few words, and a few minutes of a few people’s time.

Did you know that there are companies out there that currently sell Opthalmoscopes (eye exams) and Otoscopes (ear exams) that attach to your iPhone, and USB Stethoscopes that connect to your laptop so that detailed, high-resolution data can be easily and immediately shared between distant parties?

Imagine if one day that kind of hardware was sold at Best Buy, and every doctor, nurse, and health facility was enabled on a Virtual Care platform. Imagine if telemedicine wasn’t just a forward-thinking alternative, but a nationwide standard so that in cases of unanticipated urgent care you always had the option to go to the doctor’s without actually going to the doctor’s.

Now that would be sick.