For years, I’ve highlighted how we carefully curate and create idealized images of how we want to present ourselves to the world through social media.

Nearly six years ago, when there wasn’t the heightened awareness and dialogue concerning the social media façade, the most chilling thing about my friend Melissa’s suicide was the fact that she was smiling, shining, and seemingly “living the dream” on Facebook just days beforehand.

In short, she didn’t look like the typical “face” of suicide by any stretch.

While the awareness has increased since – perpetuated by this fall’s viral story of Australian Instagram model Essena O’Neill, who quit Instagram to expose the truth behind her “perfect” shots – the irony is that most of us continue to buy into the images of others on our social media feeds. Still. Not to mention, the pressure to appear flawlessly filtered, interesting, and perfectly polished seems at an all-time high, thanks to everyone’s expertly edited, practically art directed photos.

The less-than-ideal aspects of our lives – from bad hair days to mild meltdowns – remain absent from Instagram profiles (both ours and those of others). In one in five Canadians, those “less-than-ideal” aspects can include concealed mental health issues.

Thankfully, the mental health stigma is quickly eroding, with a growing number of millennials becoming comfortable “coming out” with mental health issues. One in particular is using social media to make a powerful visual statement. On April 3, the UK’s Amber Smith, 22, uploaded a composite of two photos to Facebook. In the top shot, she appears flawless, and is “dressed up, make up done, [with] filters galore,” as she says in the Facebook post. In the bottom shot, she appears visibly shaken, after having just suffered a panic attack. 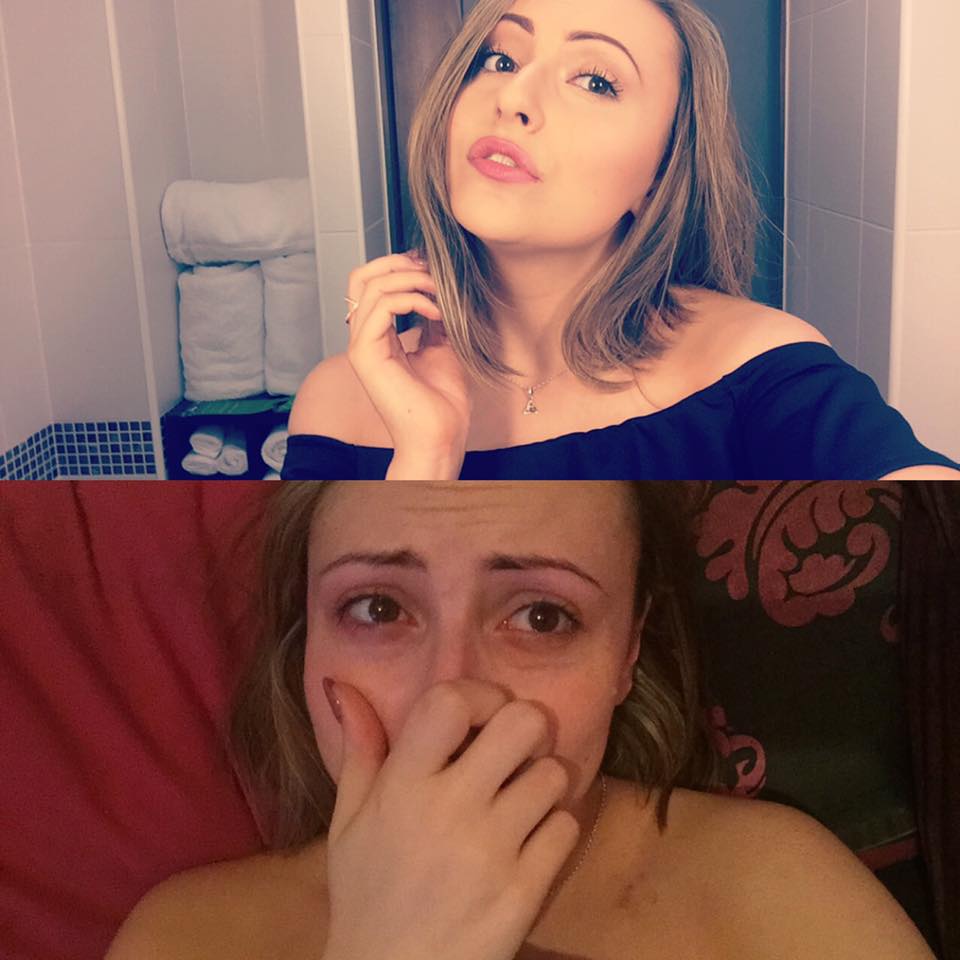 The photos clearly show that social media snaps by no means reveal the real person behind them, and that many people struggle with hard-hitting issues – whether mental health-related or a life-changing incident.

But it also reveals that some diseases are visibly absent in person, or “real-life,” as Smith says that while she physically looks “fine,” she is “battling a monster” inside her head every day.

Smith drives home the point that mental health issues don’t discriminate, and affect anyone regardless of appearance, age, income, or profession. “Someone actually said this to me one day ‘aren’t you too young to be suffering with anxiety and depression? What do you actually have to be depressed about at your age?’ Wow, just wow,” she wrote.

Another major point was that “it doesn’t make you weak” to live with mental health struggles. Clearly, not – sharing a post like that requires a ton of (very admirable) courage. In the post, Smith urges other people to seek help and support rather than “suffer in silence.”