The idea of eloping was always alluring to me.

While I love a good party, my husband and I had always joked that weddings seem to cater to everybody else but the couple that was getting married. We’ve been to countless beautiful weddings together, each bigger and better than the next. Yet, the thought of planning a big wedding just wasn’t for us. We wanted our day to be just the two of us committing to a life together with no distractions. While we have such amazing and supportive friends and family, we decided that we wanted to elope. Earlier this summer, my then-fiancé and I drafted a list of dream destinations, ultimately landing on the Islands of Tahiti. 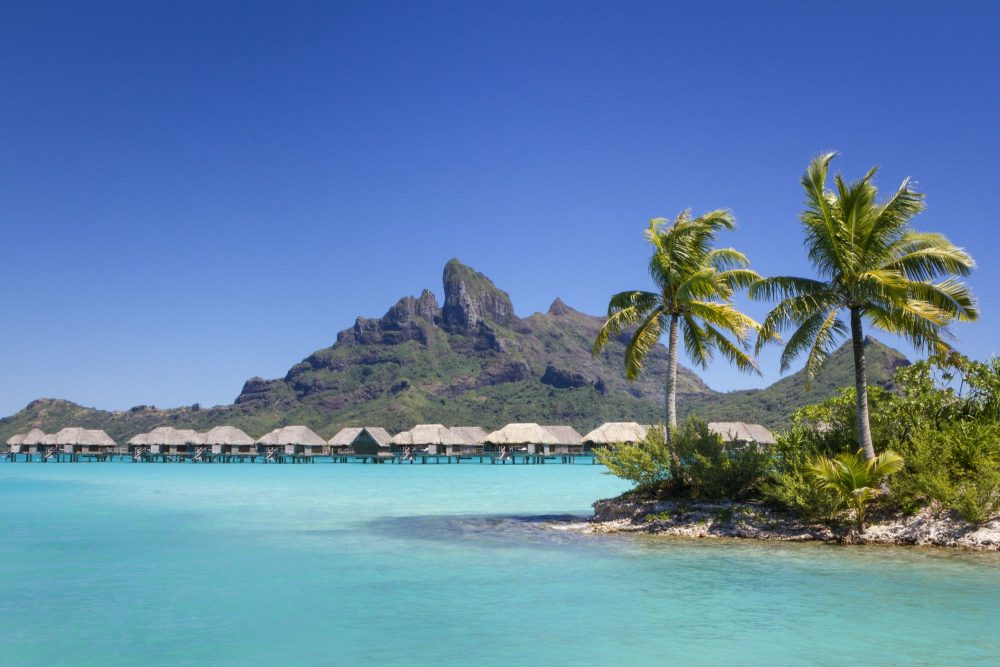 I’ll admit it was initially the overwater bungalows that attracted me to Bora Bora. I dreamt of waking up in a private hut with just a few steps separating me from leaping into the South Pacific. It was that postcard image of the crystal clear turquoise waters surrounding Mount Otemanu that secured its place at the top of our list. After some research, I discovered that there are 118 islands organized into five archipelagos that make up the Islands of Tahiti. We used Tahiti Tourisme’s ‘Pick Your Paradise’ platform to discover a number of activities we wanted to do, and the islands which offered them. We decided to explore three islands: Tahiti for culture and adventure, Bora Bora to get married and Mo’orea to relax and hit the private beaches.

In late October, we arrived at Papeete International Airport via French Bee. It was an easy eight-hour flight directly from San Francisco. It’s always a delight when a low-cost air carrier is comfortable and not overcrowded. We travelled during low season (October- April) which has cheaper rates and fewer people on board, our trip was off to a great start. From Papeete many people carry on to Bora Bora or another island via Air Tahiti. This would have been a huge miss. Tahiti is a buzzing cultural mecca, where most Tahitian traditions originated and are still celebrated today. We spent two days exploring Tahiti Iti (Little Tahiti) and another two days staying and discovering Tahiti Nui (Big Tahiti). We were impressed with the local cuisine, fresh fish, ripe fruit and french bread with every meal; the perfect marriage between Tahititan and French cuisines.  We were also fascinated by the sweeping lush mountains and the serene beauty of inland Tahiti. However, the thing that moved us most about Tahiti was the people. Each person we met had their own story about what made this island is so special. Take Teiva, a 12th generation Tahitian and our fearless leader who navigated us through Papenoo Valley. Teiva picked us up from our hotel in Traditional Tahitian dress, bare-chested showcasing his tattoos and wearing a traditional tapa cloth and pandanus leaves. Teiva had a commanding presence and his tales of growing up in the valley as a child had us both mesmerized. He made sure we stopped to feed his girlfriends — a pair of blue-eyed eels — and pointed out their presence meant the water was safe to swim in. He threw on the brakes at any opportunity to gather us ginger torches and teach us about the wildlife and flora. Then there was Timo and Kimi who took us around Tahiti Iti by jetski and by ATV. Our tour extended an hour longer than anticipated because we stopped to greet Timo’s friends and learn how each of them was making a difference on the island. This included Juliette, a young woman who decided she was going to be the first person to produce cheese on the island. After years of training in France, she opened up her shop, La Fromagerie, which sells to boutique hotels across the country. We also spent hours chatting with our bungalow host, Martine about her vision for designing Omati Lodge. Her passion for design and her husband’s craftsmanship and determination led them to create a stunning private oasis and their biggest accomplishment to date. They were so proud of their bungalows and we were honoured to stay in them. 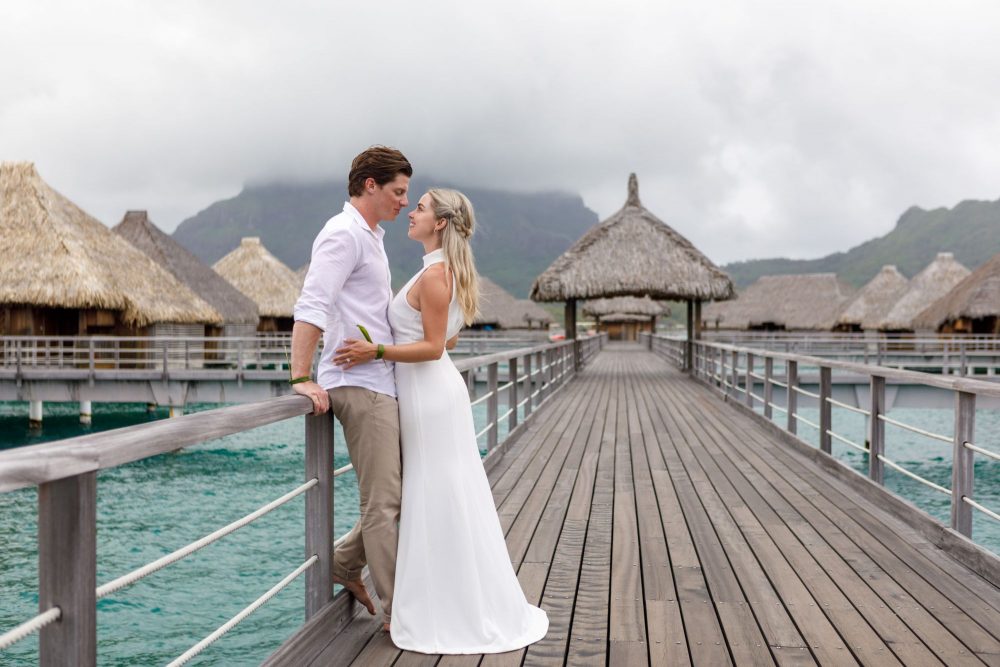 After four inspiring days in Tahiti, it was time to fly 50 minutes to Bora Bora get married. After reviewing many great options, we chose The St. Regis Resort Bora Bora to host our wedding. Aside from the resort’s top-notch amenities and accommodations, the images of the lagoon led us to our decision to elope there. I knew that was the right decision the moment I connected with the wedding planner, Estelle about two months before our big day. She made everything so easy. We didn’t need to decide on much more than our dinner menu, and confirm that we wanted a traditional Polynesian ceremony. 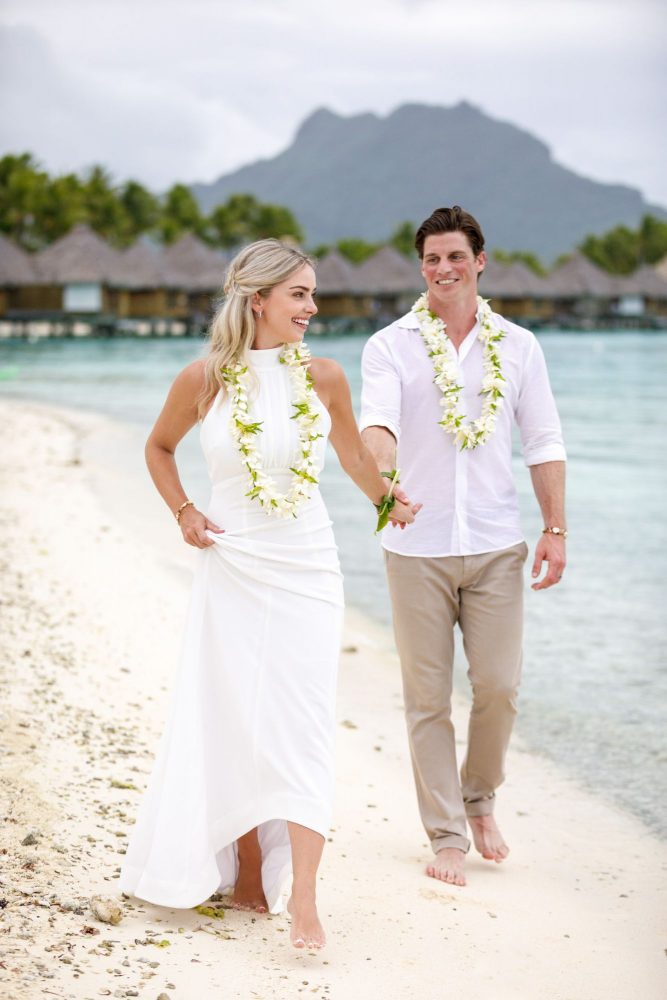 The morning of our wedding day, we woke up, jumped off our deck into the ocean, and began Facetiming family and friends to let them know we were getting married that day. The reactions were priceless, we were overwhelmed with love and support with many people agreeing that this “suited us perfectly.” My husband and I are both avid travellers and so when I told everyone I was going on a work trip in French Polynesia by myself, no one batted an eye. It wasn’t a tough secret to keep in theory, but we were bursting with excitement to make our phone calls. As someone who calls my mom daily to tell her what I had for lunch, you can imagine how hard this secret was to keep.

After some breakfast, beach-time and a little nap, I headed to the spa to get ready for our ceremony. I decided to leave my Jimmy Choos in my villa in favour of going barefoot. I swapped my tennis bracelet for the shell bracelet Mike and I made the day before during our  Bora Bora Cultural Lagoon Tour. I sat in the spa and drank champagne and got ready for our celebration. I thought I would miss the bridesmaid chatter and words of encouragement from my people, but considering I’d spoken to everyone that morning, I didn’t. I felt energized yet calm, and eager to see Mike. 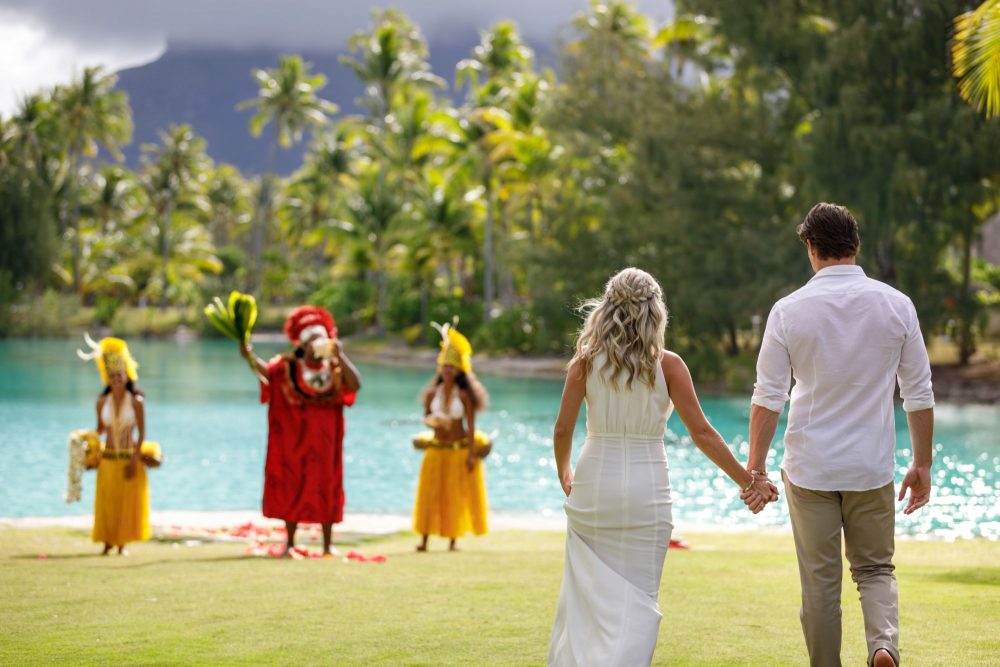 Polynesian ceremonies are rooted in tradition, meaning and symbolism. The proceedings included live drums, ukuleles and Polynesian dancers. The conch shell sounded as we walked down to the beach. The Tahua (Tahitian priest) welcomed us and the ceremony was done in English and Tahitian. The local auti plant was tied around our wrists and a watershell was poured over our hands to purify us from our past. We exchanged leis and flower crowns, symbols of sharing and harmony in a marriage. We said our own, very personal vows and exchanged wedding rings. The Tahua wrapped us in a traditional red pareo to signify a strong union and we were given a traditional Polynesian name from the priest. From there, we went to the main beach — Mike by traditional outrigger canoe — for a Polynesian dance show. We didn’t stop smiling the whole day. It was magical and personal. As someone who didn’t have a religious upbringing, I really appreciated the history and tradition of the ceremony and was so grateful we were able to celebrate our marriage the way we did.

While it’s been just over a month since we said our ‘I do’s’ in paradise, we both agree we wouldn’t have changed a thing. It was the perfect way to begin our lives together as husband and wife. I will forever be grateful for the people we met while visiting the Islands of Tahiti and the experiences we were able to enjoy. I would encourage any engaged couples out there to stay true to what is important to the two of you while planning your big day or discrete elopement. Since we broke the news I’ve had many brides tell me they wished they’d done the same. I would never want to tell anyone how to do their wedding. But for us, it was perfect. 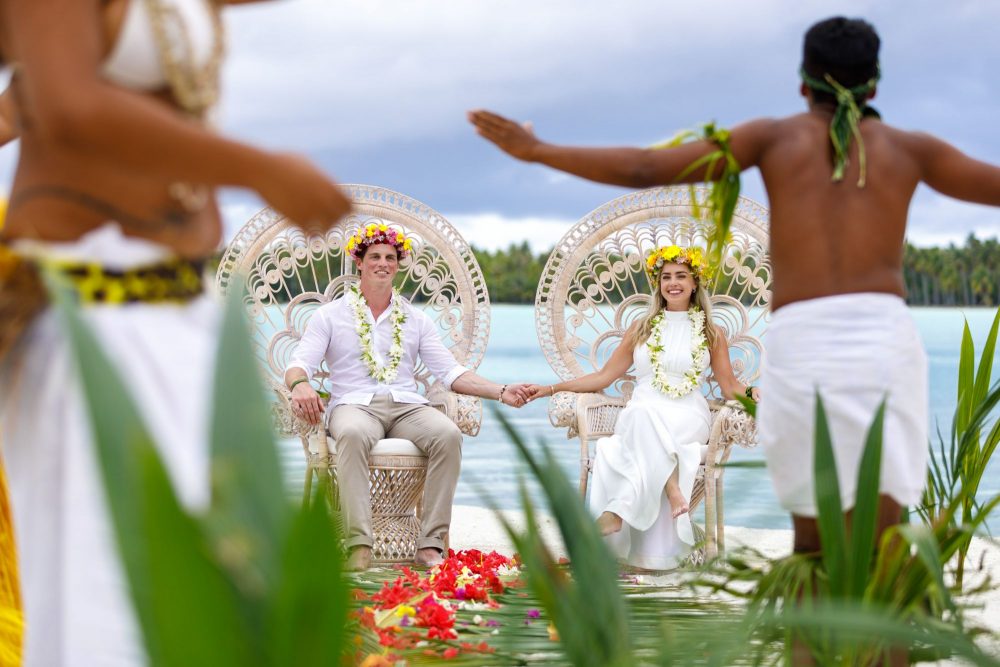 If you are planning a trip to the Islands of Tahiti, I have linked my itinerary here, or visit Tahiti Tourisme to take the ‘Pick Your Paradise’ quiz.