Crooklyn was one of the first VHS tapes I bought as a kid with my own money, I tell Spike Lee when I sat down with him yesterday at Toronto’s Struck Gallery.

That gets a laugh from the legendary director, who was in town to promote his latest “joint,” Chi-Raq.

But the film’s resonating theme is no laughing matter (which is why Lee has been adamant to make it clear that it’s a satire, not a comedy). At front and centre of the controversial film is the issue of rampant gun violence in Chicago’s South Side. The name “Chi-Raq” refers to the fact that the number of gun-related deaths in Chicago surpasses the death toll of American special forces in Iraq.

Featuring an all-star cast that includes Nick Cannon, Teyonah Parris, Wesley Snipes, Angela Bassett, Samuel L. Jackson, John Cusack, Jennifer Hudson, and Dave Chappelle, the film tells the story of a gang leader’s girlfriend (Parris) who convinces fellow wives and girlfriends of gang members (and eventually, women across the city and the word) to deny their men of sex until the violence stops. Their slogan is simple: “No Peace, No Pussy.”

Although it tackles the very modern epidemic of gun violence, the film is actually based on a Greek comedic play written by Aristophanes and preformed on stage in 411 B.C. With a dialogue of rhyme throughout, the battle-of-the-sexes story is adapted to modern day Chicago, where, as Lee says, “we see a culture that goes from the schools to the penal system,” calling Chicago “the murder capital of America.” The numbers don’t lie, he tells me. 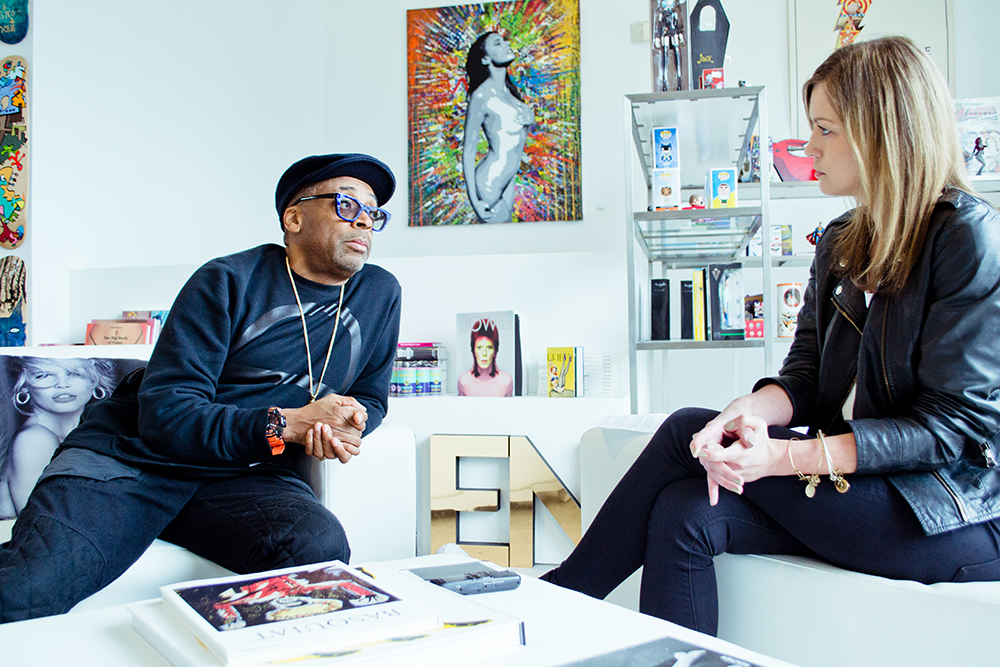 “The first edition of this project – he wrote the script – it was called Got to Give it Up. Again, it was based upon Aristophanes’s Lysistrata. We couldn’t get it made. Then last year I said let’s get back to this again; let’s co-write this and set it in Chicago. The first attempt was this non-descript, inner city neighbourhood,” Lee says.

Though set in Chicago, the film speaks to gun violence in general in America – whether between rival gangs, or white, upper middle class gun-bearing citizens. “The film takes place in the south side of Chicago, which is predominantly black and incredibly segregated,’ says Lee. “But violence affects everybody in America. Ninety-nine Americans die every day due to gun violence. One-third of those are death due to suicide. It would be foolish for people to think that it was just affecting black people.”

To get a first-hand feel for the neighbourhood, Lee spent six months in Chicago before the cameras started rolling. Once they did, the entire film was shot in just 38 days (“We were moving and grooving,” says Lee). “In the short time we were filming – we commenced principal photography June first and finished July 9 – over 300 people got wounded and shot, and 65 people got murdered…and those numbers have escalated this year – and it’s not even hot outside yet.” 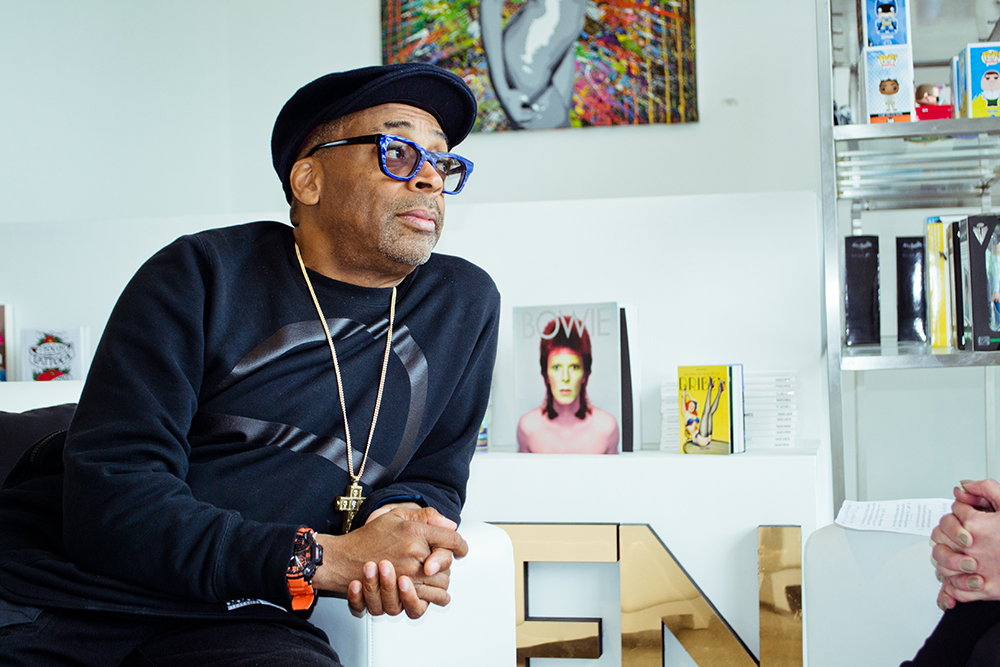 But, of course, South Side Chicago is just a symbol for such violence happening in cities across the U.S. “It’s not just in Chicago,” Lee reminds me. “People feel hopelessness, people are hurting, there’s poor education, food deserts, which means poor nutrition, no jobs, mass incarceration…and all those things are a recipe for what we have now.”

In the film, gang leader Nick Cannon plays an aspiring rapper. But that isn’t to suggest that the hip-hop world can be blamed for glamourizing gun culture. “It’s not just the hip-hop community,” says Lee. “America itself has glamourized guns. From Hollywood movies and TV shows, to video games, so it can’t be blamed squarely on the hip-hop community. In all seriousness, the originators of hip-hop weren’t talking about shooting people. That evolved into that later.”

The conversation shifts to finding a solution. “At the moment, it’s about the guns. I think common sense laws could be acted that don’t in any way shape or form infringe upon on peoples second amendment right. We need better schools; better jobs. The system right now is set up for people to fail, especially people of colour in the United States of America.” He says we should all be paying attention to Chicago’s Father Michael Pfleger, an anti-violence activist, and the character played by Cusack.

The film has been met with some backlash, with its critics – most notably by Chance the Rapper – calling it exploitative, sexist, and racist. But the thing is, Lee is pretty much immune to criticism by now – most of his films have resulted in divided opinions. He seems slightly offended when I ask how he deals with the “haters” (poor choice of lingo on my part). “In no way, shape, or form do I think that by criticizing it means they’re hating,” he says. “I’ve received criticism from my very first film, which on August 9 will be the 30 anniversary of She’s Gotta Have It. It slides of the shoulder, you know, I’ve gotta keep steppin.”

I ask Lee how he defines the success of a film. “As I tell my students at NYU film school, there’s no right way to do anything,” he says. “I will say that there was a report by UCLA that states that films with a diverse cast make more money. So that should help the gatekeepers when they decide to make films; who directs, who writes it, and all that other stuff. Here’s the key: it can’t just be diversity in front of the camera; there needs to be diversity behind the camera too.” 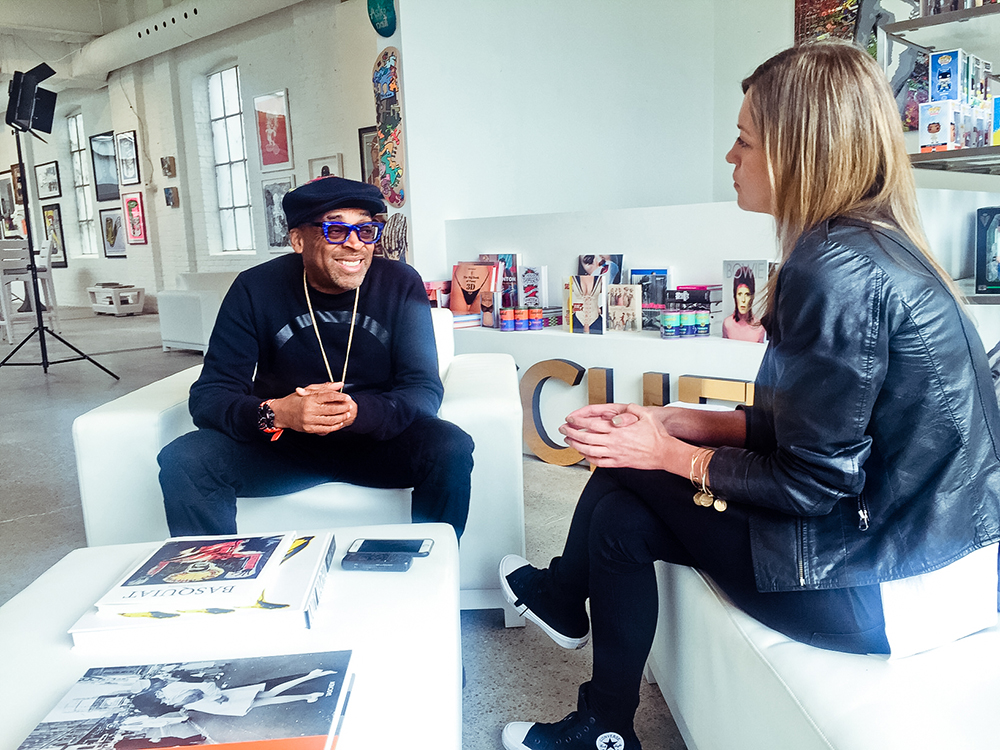 As for advice for millennials in general, he hammers home the fact that “there’s no such thing” as an overnight success story. “Find your passion and pursue it, but don’t be tricked into these reality games stuff and think that you’re going to be successful overnight,” he says. “You’ve got to work and learn your craft, you’ve got to work, work, work, work.”

Unfortunately for Lee, “work” was pretty much all that his Toronto trip entailed – but he’s seen the city before during TIFF time. He calls the film festival “one of the best in the world” and one of his favourites, giving a much deserved shout-out to TIFF’s artistic director Cameron Bailey; “Brother man is doing it,” he says.

Chi-Raq opens today in Toronto (TIFF Lightbox) and in Vancouver (VanCity Theatre) and Calgary (The Globe) on April 1, and is also available as of today on iTunes.