Over the past few weeks, it seems like everyone is talking about two things in Toronto: the weather and the weed.

From coworkers and a group of friends at a wedding, to the barista at my local coffee, um, joint – hell, even my Uber driver (who was actually the first to blissfully inform me that you could buy weed without a medical prescription on hand) – everyone’s “buzzing” about how easy it now is to get stoned on demand.

For Toronto’s pot smokers, gone are the days of waiting on a shady weed dealer, or rationing out what you do have because you don’t know where and when you’ll buy more. Toronto’s cannabis dispensaries are here in all of their green-filled glory – and it’s safe to say that they’re not going up in smoke anytime soon. 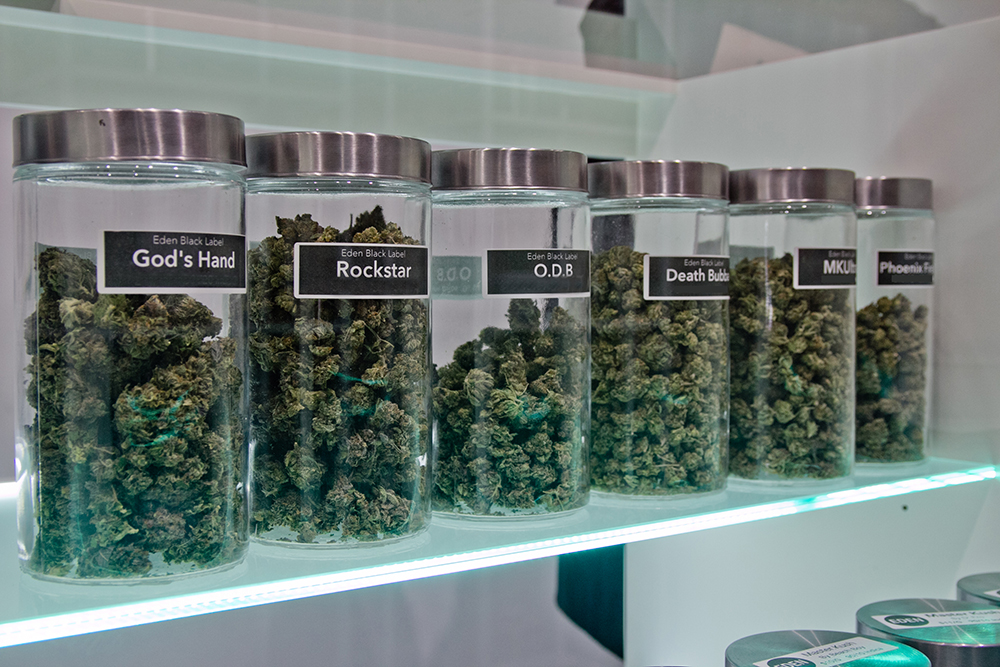 The other day, I took a very ambitious (but head-clearing) walk from Roncesvalles and Dundas to the St. Lawrence Market neighbourhood and found myself stunned at the number of medical marijuana dispensaries I passed. As I strolled down Queen Street, there was even someone standing at the door to a new dispensary encouraging passersby to come in. She was handing out business cards like they were coupons to an ice cream shop on the sunny Sunday afternoon.

More than ever, the country is beginning to embrace the medicinal benefits of marijuana, as people who rely on the plant for everything from stress and anxiety (two common struggles of young professionals) to insomnia, glaucoma, and MS now have easier access to it than ever before. Heath Canada recognizes over 720 different diseases and ailments that can be treated by medical marijuana. And in Canada everybody has the right to choose how we medicate – whether that means traditional medicine, or our old friend Mary Jane.

I wanted to experience all the dispensary hype firsthand – and to put my Uber driver’s knowledge to the test. So, this morning I hit up two different medical marijuana dispensaries – both within walking distance of the Notable.ca office (at Richmond and Spadina). The quick favourite Zen Zoo is located at 480 Queen West and has a bit of a Bob Marley feel. It’s filled with trippy, psychedelic art and plays an assortment of old-school rock favourites from the days before you tried your first joint (at least while we were there they did). It is furnished with a couch and two lounge chairs – there can be a bit of a wait to get through the lineup for administrative work. The actual counter is through another door that only members can access.

Eden – located just down the street at 760 Queen Street West (conveniently located right next to Trinity Bellwoods park) – on the other hand, offers more of a refined, sleeker look, with clean decor, plenty of mirrors, and no shortage of plants (no, not of the marijuana variety) throughout. Registration is done via iPads and the counter visible from the storefront. Eden is the country’s first licensed dispensary; they opened up shop in Vancouver in 2011 and now have 6 locations in the city. The first Toronto location opened its doors a month ago, and the manager tells me that there will be a total of four locations by summer. One will open in the coming weeks at Dundas and Dovercourt, followed two others; one on Queen East, and one at Bayview and Eglinton. 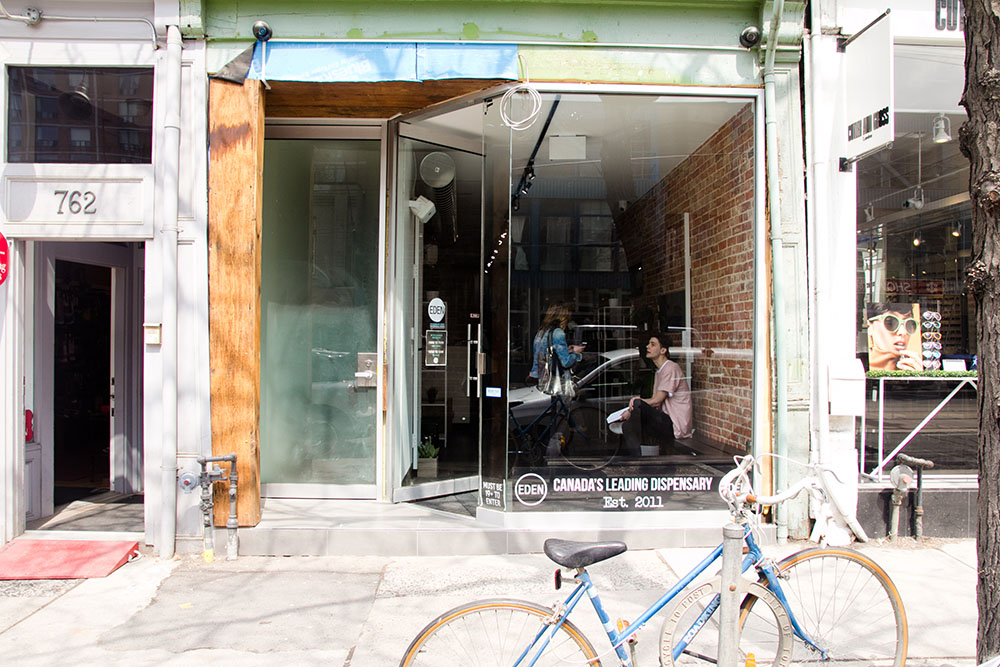 Now, on to the getting of the weed without a prescription part:

Basically, most Toronto dispensaries offer what they refer to as a compassion period. This is what enables you to buy weed for the weekend without a prescription.

You’re usually given a few sheets of paper to fill out, indicating why you are medicating with marijuana (the whole thing takes less than five minutes), and given a 30-day window during which time you can become somewhat of a temporary member, under the assumption that you’ll come back with a prescription within the timeframe. In the meantime, you can buy pot every day if you want. At Eden, this compassion period is only two weeks, but they make it easy to become a member. If you don’t have a family doctor or for some reason can’t get the prescription filled, the clinic has an in-house doctor (well, thanks to an Encrypted Video Conferencing service – the doctor lives in Vancouver) who takes appointments during nightly time slots. This doctor will provide a free “conformation of diagnosis” rather than a formal prescription, which is enough to grant you full membership. 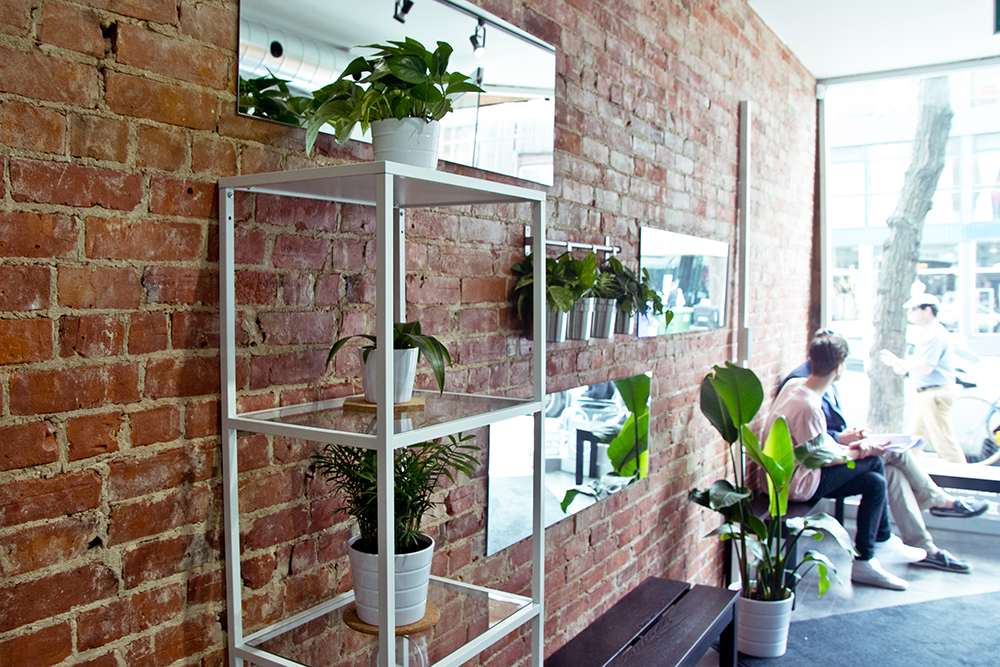 Despite their distinctively different vibes, what both clinics have in common, of course, is the vast assortment of cannabis options. With jars full of more pot than you’ve ever seen in your life (in addition to pre-rolled joints) accompanied by an assortment of sweet edibles that look delicious (weed-filled or not), it’s the stoners’ version of a candy shop. What else that’s so amazing is how precisely you can curate your cannabis experience – whether you’re looking for something to put you to sleep and calm your mind, or one to offer an energetic boost, yet calm your anxiety at the same time – the menu is neatly divided into indica, sativa, and hybrid options.

Naturally, the cannabis menu changes almost daily. “Four Twenty really hit us hard,” says the guy behind the counter at Zen Zoo when I asked why there were relatively fewer sativa options on the menu. Eden was just as busy on Wednesday.

The edibles, of course, offer a discreet way to medicate (or get stoned) – one of my girlfriends’ particularly stressful job means that some days mowing down on a weed-laced piece of chocolate makes for a less stressful TTC ride home. Edibles include baked goods, chocolates, toffee, and candies. Zen Zoo even has an assortment of hazy colas. 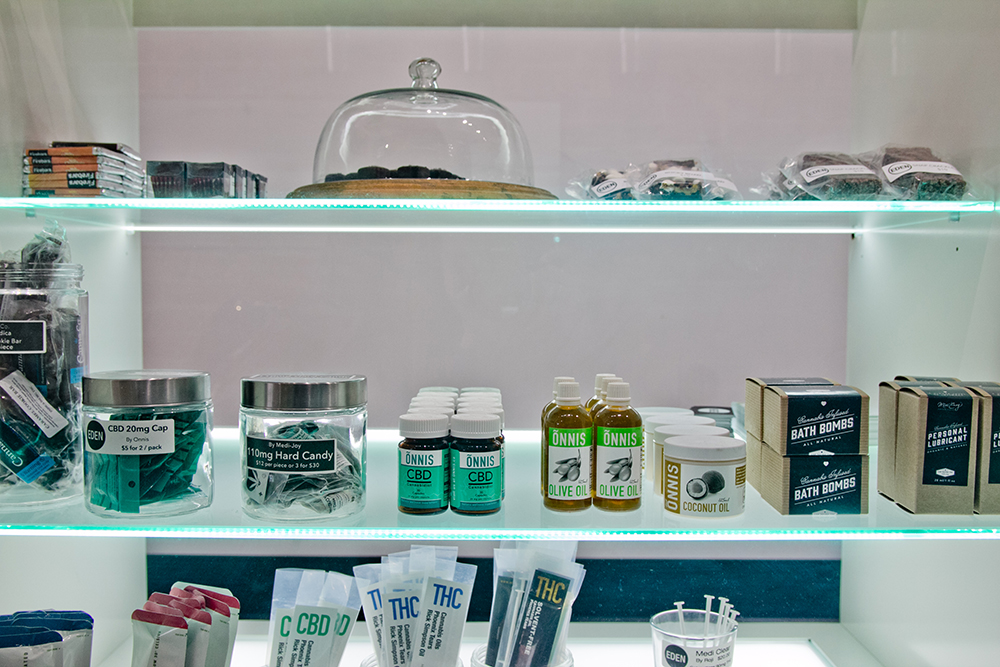 In addition to their offerings, something else was glaringly similar in both dispensaries: the clientele of both members and potential members ranged from 21-year-old hipsters to well-dressed young professionals on their lunch break. There were even respectable people our parents’ age shamelessly stocking up, presumably in between other errands.

So, basically, you’ll fit right in – and the whole thing will take 15 minutes.

If you want to check out a Toronto dispensary for yourself, you can find one here. Remember to bring a piece of government-issued photo identification and don’t expect to pay with your credit card – all purchases are cash (both clinics have a bank machine on-site). As for the prices, they seem reasonable at both clinics, with a gram ranging from a low $10 (like on strain at Eden) to $15.

As for the weed – I will let you know how the “Moby Dick” sativa was later (**too stoned to type** – just kidding). 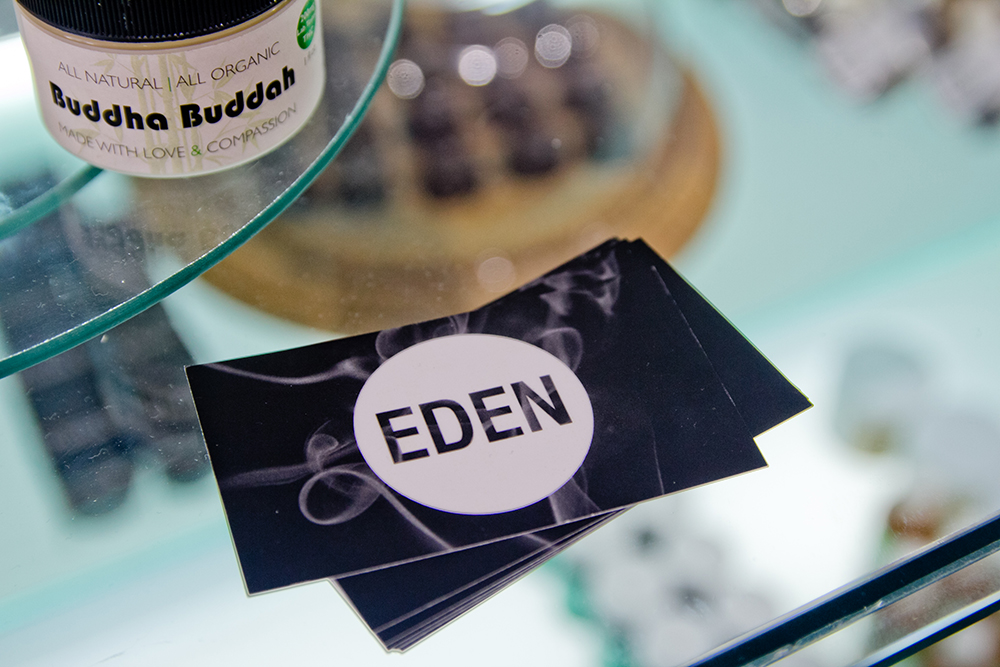