Often when Vancouver makes headlines it’s to do with sky-high real-estate prices or the cost of living.

But this time around, Vancouver is being recognized by fashion bible Vogue for its pristine parks, unique markets, and diverse culinary scene – all in one perfect 24-hour period.

That’s right, Vogue has just outlined how to spend the perfect day in Vancouver.

So what’s on the agenda you ask?

First, get your day started on the right track by getting caffeinated at Matchstick Coffee Roasters in Mount Pleasant or Chinatown”for your shot of single-origin coffee, roasted on-site and served with tender, loving care by friendly, tattooed baristas.” Or another great coffee option is at 49th Parallel on Main Street, where the owners pride themselves in making an ethical cup of coffee.

Then make your way to Stanley Park and take a leisurely stroll through the grounds, which actually makes up the largest park in North America. And despite being walking distance from Vancouver’s downtown core, “You’ll feel miles away from civilization. Look up and you might even spot a bald eagle soaring through the sky.”

(Sorry Vogue, that’s your symbol, not ours. We’ll take a beaver spotting please.)

Next, make your way to Medina Café, where you can fuel up for the rest of the day’s activities. Vogue suggests trying the spicy chorizo paella topped with avocado, Grana padano, and a charred tomato salsa.

And because of Vogue’s fashion focus, it also recommends checking out lululemon and its technical-cashmere-selling sister Kit and Ace, as well as homegrown streetwear brands Reigning Champ and wings+horns at some point during the day.

Next on the agenda is paying Granville Island a visit. “A onetime wasteland that was reinvented in the 1970s as a walkable man-made island for shopping, eating, drinking, and people-watching, Granville Island features a public market with fresh specialty foods as well as pedestrian-only alleys where shops are filled with arts and crafts by local artisans.” 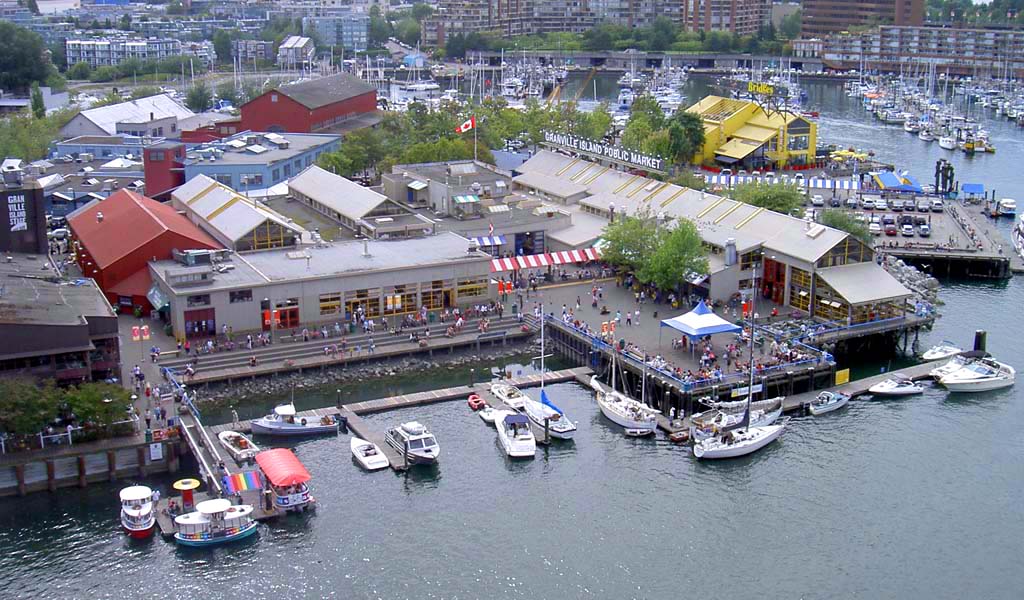 After exploring the eclectic shops in the market, you’ll most likely be feeling parched. Lucky for you nearly two dozen microbreweries have opened up around town over the past few years. Vogue first recommends 33 Acres Brewing Co., “Where handsome bearded men pour pints in an airy, light-filled space.” If you want other beer options, Vogue also suggests paying Brassneck Brewery, Strange Fellows, and Vancouver Brewery Tours a visit.

After you’re finished quenching your thirst, Vogue suggests it’s time to immerse yourself in a little culture. And there’s no better place to take in the city’s culture scene but at the Museum of Anthropology, which “Showcases thousands of archaeological and ethnographic objects from around the globe, particularly from First Nations communities.” But before you leave the grounds, you need to check out the Haida village and totem poles that are behind the Arthur Erickson–designed anthropology building.

By this point, after taking in all the fresh mountain air, you’ll be starving. But don’t worry, ’cause dinner is the next stop on the agenda. You’re dining options include Savio Volpe, which is a rustic, modern osteria, and AnnaLena, which offers diners an intimate yet playful dining experience.

Before the evening comes to a close, make your way to Juniper for a post dinner cocktail. Vogue recommends trying the Rad-ish which is, “a gorgeous cocktail featuring Ampersand gin, radish, dehydrated lemon, pink peppercorn, and lemon tonic.”

Finally, check in at the Hotel Georgia. Renovated in 2011, it attracts “well-heeled jet-setters, thanks to impeccable service and interiors.” Stop in for a nightcap at the speakeasy-chic Prohibition, an underground bar in the hotel that recalls 1920s elegance.

So there you have it folks. That was Vogue‘s recommendation for a perfect Vancouver day.

How would you spend yours?