The Vancouver Area Network of Drug Users (VANDU) led a series “yuppie gazing” tours this week throughout the city’s Chinatown.

They were held in response to a neighbourhood walking event organized by guide Jenn Porter of Socially Responsible Van that’s been criticized for promoting poverty tourism.

Rumblings of the movement began last week after a profile of “Socially Responsible Vancouver Tours” appeared in the travel section of the Toronto Star. The tours charge $185 for one person ($195 for two people) to explore Vancouver’s poverty-ridden Downtown Eastside.

The sentiment of VANDU was that such tours treated poor people “like animals in a zoo.”

So VANDU decided to reverse the narrative, taking a bold stance against what they call poverty tourism by making wealthier people the subjects of their gaze. 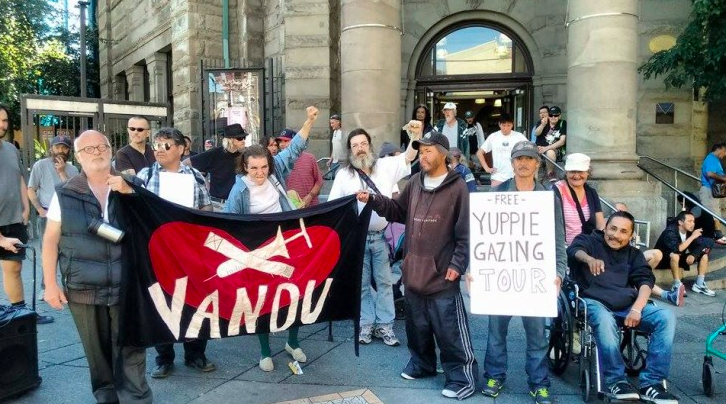 Chanting “Downtown Eastside is not a safari, drive away in your Ferrari,” and armed with signs that read “Free Yuppie Gazing Tour,” the group marched through Chinatown yesterday.

Along the way, they stopped at a handful of new businesses that have come to symobilize the neighbourhood’s rapid gentrification – establishments they call “places of exclusion” for the low-income residents.

“They are spaces where poor people are judged and watched suspiciously, spaces where low-income people can’t even afford the cheapest item on the menu. On most days — except for today — they are places where people with money can sit in comfort and gawk at poor and homeless people on the street and sidewalks outside,” reads a summary of the tour posted online.

A City of Vancouver 2014 report states that in 2013, 60 per cent of the Downtown Eastside’s 18,500 residents were low-income and 731 were homeless. Despite this, between 2001 and 2013, the property values in the neighbourhood more than tripled.