A survey released today reveals that US beekeepers lost more than 40 percent of their honeybee colonies during the year spanning April 2014 to April 2015.

The survey – conducted each year by the Bee Informed Partnership in collaboration with the Apiary Inspectors of America – asked 6000 commercial and small-scale beekeepers from all 50 states to track the health and survival rates of their honeybee colonies. The results are important because it was previously thought that winter losses were more of an important indicator of health, as surviving the cold winter months is a crucial test for any bee colony. However, we now know that summer loss rates are a pretty big deal too.

Among backyard beekeepers – defined as those who manage fewer than 50 colonies – the varroa mite is to blame. The lethal, bloodsucking parasite can spread between colonies. When it comes to the commercial beekeepers, the causes for the losses weren’t so apparent.

“Backyard beekeepers were more prone to heavy mite infestations, but we believe that is because a majority of them are not taking appropriate steps to control mites,” said Dennis vanEngelsdorp, an assistant professor of entomology at the University of Maryland and project director for the Bee Informed Partnership. “Commercial keepers were particularly prone to summer losses. But they typically take more aggressive action against varroa mites, so there must be other factors at play.”

The survey is part of a larger research effort to understand why honeybee colonies are in such poor health, and what can be done to manage the situation. The findings, of course, raise concerns over the long-term trend of poor health in honeybee colonies.

Even if you’re allergic to bee strings, or terrified by the sight of bees – the decline is definitely not a good thing. There’s nothing sweet about this news as bees play a significant role in fruit and vegetable production.

Not only do colony losses present a financial burden for beekeepers, they can lead to shortages among the numerous crops that depend on honeybees as pollinators. This means things like almonds, which depend entirely on honeybees for pollination.

If you still don’t care, consider this (just to drive home the point, especially to you foodies): Seventy out of the top 100 human food crops, which supply about 90 per cent of the world’s nutrition, are pollinated by bees. 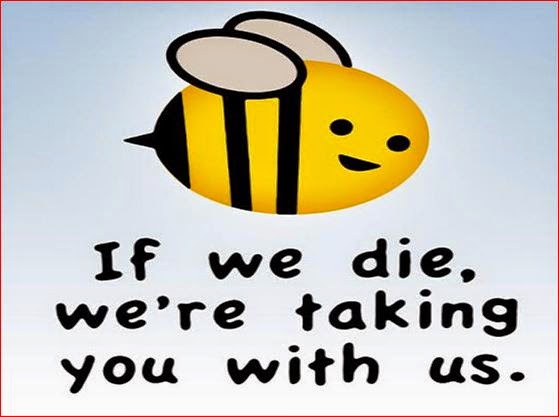