In this age of choice and luxury, where one can Uber themselves a kitten and turn their iPhone into a drone, people expect airports to be more reflective of a five-star shopping experience in a Dubai mall than a plane terminal.

Such expectation lends us the privilege to consider any of Canada’s relatively great airports “worse” than another, as evidenced by a recently released poll conducted by FlightNetwork.com.

The survey quizzed Canadians on their feelings about Canada’s three major airports – Toronto, Montreal, and Vancouver – based on factors like comfortable lounges, close to home, and good restaurants and entertainment. Such criteria essentially renders any airport that doesn’t offer Michelin-star meals in a private home theatre, literally at home just steps from the runway, a sh*thole.

Despite increased security efficiency, impressive dining options, high-quality wifi, iPads everywhere, outlets, and self-service stations in abundance, travellers have voted Toronto’s Pearson International as the worst major airport in Canada for the second time in a row. Thirty-five per cent of respondents shared this opinion, while 16 per cent believed Montreal’s Pierre Elliot-Trudeau airport to the the worst and 7 per cent considered Vancouver International to be the worst place you can end up before or after taking off.

Check out the below infographic for a more detailed look at how Canadians might have arrived at these conclusions and why investing in body scanners is a wiser move than splashing cash on iPads. 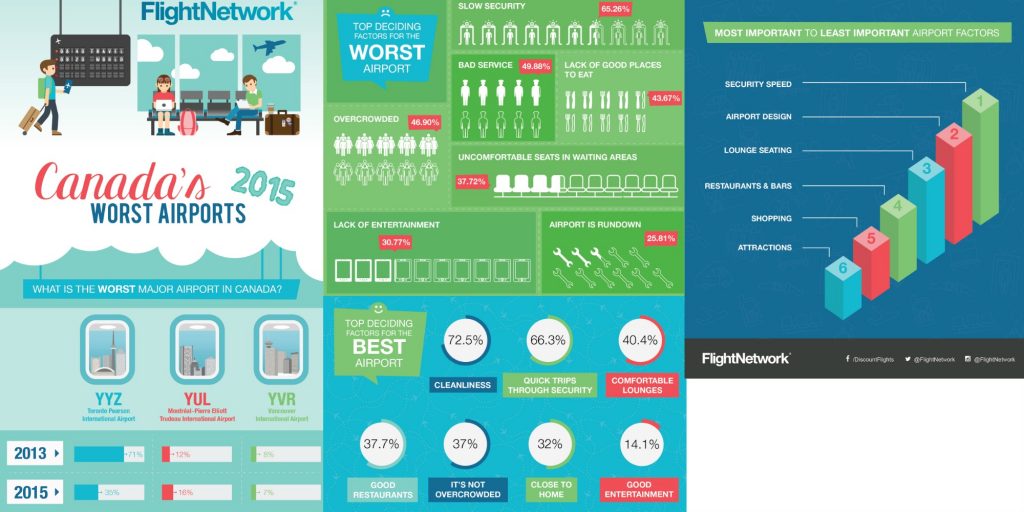