An eight-months-pregnant Toronto woman says a taxi driver refused to give her a ride and drove away after she told him her destination.

You know, the kind of action that’s both illegal and can be considered one of many reasons that contributed to a woman being killed by a stray bullet in August.

“He pulled over, rolled down the window, and asked where I was going,” Andrea Piunno told CITY News. “I said Main and Danforth area, at which point he just said ‘no’.”

She hailed the cab at the corner of College and Euclid, which is over 10 kilometres away from her destination. Could this be a case of too-far proximity? Did the taxi driver calculate that the travel time would exceeded an urgent need to use the bathroom? 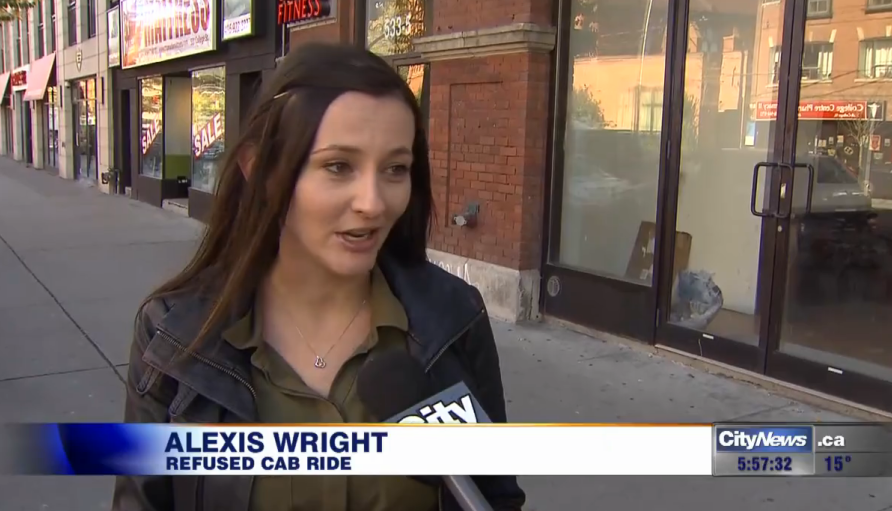 Piunno wasn’t able to catch his ID number, so the mystery shall remain unsolved.

According to the union representing Toronto cab drivers, there have been 6000 ride refusal complaints filed in the city over the past four years. Which means that about 4 people a day are being refused and are actually pissed off about it enough to file a complaint (the number of actual refusals could obviously be much higher). There is no data available for how many Uber cars disappear from the grid after entering your destination.

Many Toronto taxi drivers responded to the story by condemning the driver’s actions and calling on harsher penalties for those who refuse rides. “In every industry, there are bad people,” says one taxi driver, Krishna Pillai. “I’ve been in this business 24 years and never refused any fare.”

It’s certainly easy to sympathize with drivers like Krishna, whose reputation is tied to that of the tanking cab industry, for which public opinion is as much based on perception as it is perspective. There are around 60,000 taxi trips a day in Toronto, but you’d think there are only 6,000 with 60,000 refusals based on people’s reaction to taxis these days. A lot of that has to do with marketing, of course. Whereas Uber drives you to polling stations and delivers puppies, cab companies really make you feel as though they couldn’t give less of a sh*t about your well-being.

The driver’s employer, two-and-a-half-stars-on-Yelp Co-op cabs, has offered gift cards for the inconvenience.

Piunno, meanwhile, says she’ll immediately switch to Uber for future auto-based transport, a microcosm of what seems to be happening all across the city.