Some of Toronto’s most recognized street signs are getting a makeover. While they won’t be modernized, per se, they will definitely be more progressive.

The signs will go right back to their roots, rocking their original names from thousands of years ago.

In 2013 – at the height of the Idle No More movement – artists and activists Hayden King and Susan Blight began a project called Ogimaa Mikana in a move to reclaim Toronto’s Indigenous history. 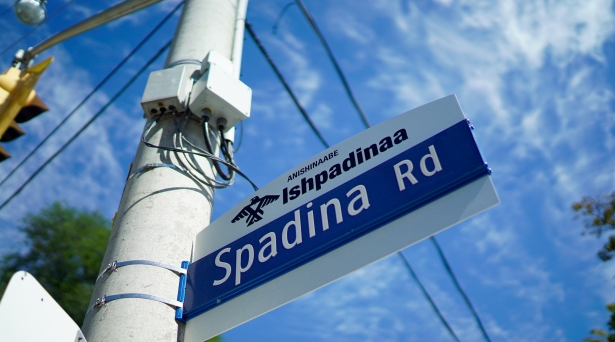 They made stickers with Indigenous translations of the Toronto street names we all know, sticking them over the English signs. Now, they’ve moved on to the real deal. As of Friday, “official” signs are now appearing across the city.

The signs are part of a joint initiative by Ogimaa Mikana and the Dupont by the Castle Business Improvement Area (BIA). Stuart Grant, chair of the BIA, said the group was inspired to bring the signs to their ‘hood after seeing the hand-made ones by Ogimaa Mikana online.

The BIA took the idea to the city and shortly after began working on the design of the signs.

Apparently the movement is just beginning – the hope is that the signs expand throughout the city. 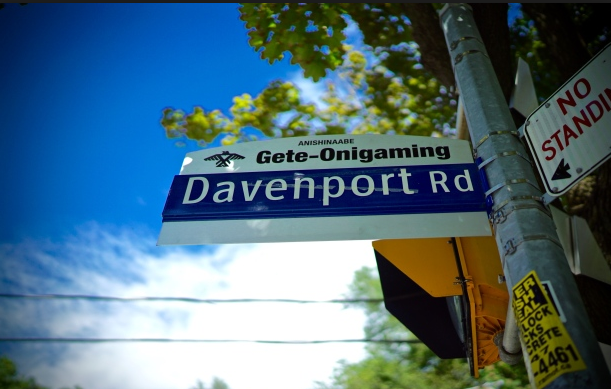 On its website, Ogimaa Mikana says it hopes “to restore Anishinaabemowin place-names to the streets, avenues, roads, paths and trails of Gichi Kiiwenging (Toronto).”

The signs will serve as a reminder that we were far from the first people to occupy the land – and those who were can’t be rendered invisible anymore.

Luckily, in everything from this powerful Canadian Heritage commercial that highlights the story of Chanie Wenjack and Gord Downie’s involvement in it, to the fact that that Zoe Saldana is producing a documentary on missing and murdered Canadian indigenous women, we are finally bringing this long-repressed group out of the shadows.