As we told you a earlier this week, when it comes to modern misdoings, there often involves a trial by social media before (an if) an actual one.

A Toronto coffee shop in Kensington Market is facing a growing amount of backlash after it was discovered that it was showcasing art by a Toronto man who had been accused of harassing two women on Twitter.

If you’ve hit Nassau St.’s I Deal Coffee as of late you may have noticed the work of Gregory Alan Elliott, an artist who currently faces assault charges, hanging on the wall of the coffee shop.

Not surprisingly, some people are not happy about it and have taken to social media to express their distaste.

Others, however, have praised the cafe for defending due process. Once upon a time, the words “innocent until proven guilty” rang truer than they do today, when social media outlets seem to have replaced the courts, and their countless users have become (really aggressive) jurors. Elliott’s legal verdict, however, won’t be decided until it hits court next year.

The coffee shop defended their actions in a Facebook post, stressing the fact that they don’t endorse harassment, but rather local artists and that it should be left to the judges (as in, the actual ones) to decide if someone has committed a crime. 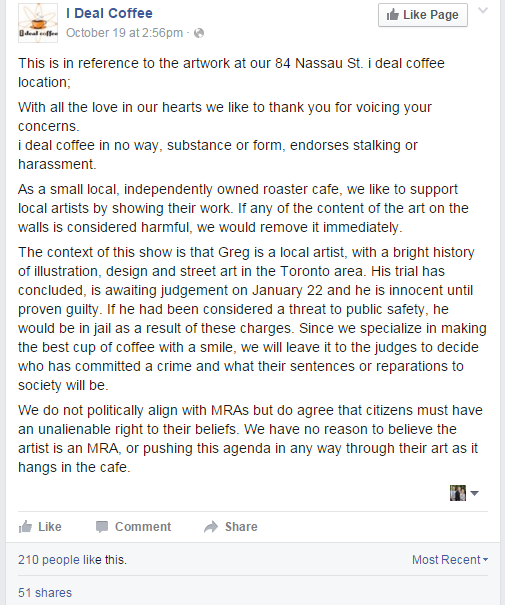 And for the time being, they’re right.

If he is convicted, though, it’s safe to say that another show probably won’t go over too well.