If you’re in the market for art that doubles as furniture, well-known Toronto artist Thrush Holmes is currently selling vibrant cubes that won’t break the bank.

Holmes – a mixed media artist known for his eye-popping and unpredictable paintings – steps away from the flat canvass to explore three-dimensional forms, while retaining his energetic use of colour. 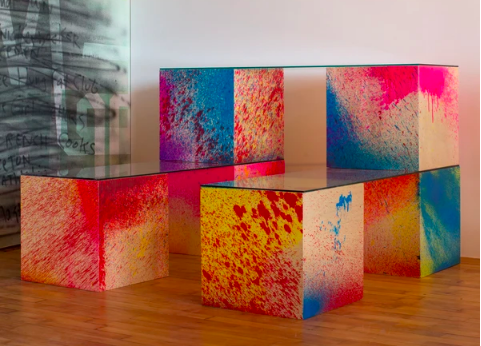 As part of a series of unique editions by Thrush Holmes created exclusively for New Auction, titled Cube, Holmes sprayed 200 15.5” cubes with recharged fire extinguishers full of heavily pigmented paint. The cubes made their debut on January 17 at Toronto’s East Room, where they were assembled as a massive pyramid in an installation called This is Some Louvre Shit.

The individual cube is a usable sculpture: part art, part furniture. For a relatively – and refreshingly – modest price tag of $350 each, a limited number of cubes are currently available online through exhibit presenter New Auction’s website and available for pickup at East Room. In addition to art, they can function as tables, either on their own or when multiples are paired with glass. 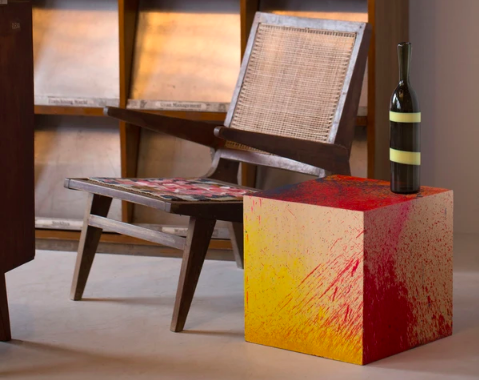 Offering something completely new in Toronto’s growing design scene, New Auction is an auction platform with an aim to build awareness and engagement in Toronto, and to de-mystify, the design auction experience in a climate where retail is dying and auctions are seen as the pretentious realm of the very few. It’s the brainchild of Colen Colthurst (founder, Porch Modern) and Derreck Martin (co-founder, East Room). 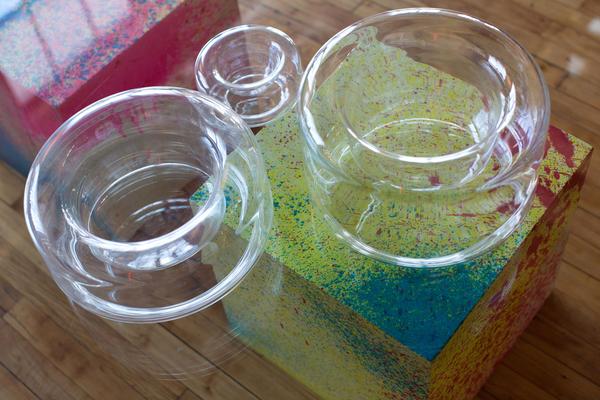 We caught up with Holmes to hear more about Cube.

How is the way that people consume art changing and what does that mean for the artist?
There is very little context anymore, or at least the context is mostly beyond an artist’s control.  We look at art in pictures more than in-person—it’s a fleeting moment. I suppose artists need to consider now, more than ever, how photogenic their work is and how immediately it can be understood.  Things are faster now.

What do you find most stimulating when it comes to creating 3D art?
The primary challenge is having it stimulate from all angles. That’s the big consideration. Sculpture needs to perform in a more complex way than a painting does.

A growing number of artists are rethinking the line between furniture and art. Do you think the labels of “designer” and “artist” will become more fluid/intertwined/blurred in the future?
I don’t think so. Artists are doing more projects in design and it’s increasingly common to make editioned works for the purpose of accessibility. There is a certain degree of darkness that an artist has that isn’t present in design.  In my opinion, artists are compelled in a certain ways that designers are not. In some ways artists are helpless. They’re always in the state of becoming and are somehow destined to the craft—it’s like a sentence—and design is a bit lighter in that regard. An artist can move into design but it’s rare for the inverse.  It happens, but it’s rare.

What are the biggest barriers facing Toronto artists?
Provincialism.  It can be a small market and scene at times.  I think a lot of artists get consumed by the idea of presenting themselves locally and don’t broaden their scope.  The world’s a big place and it’s increasingly easier to access new audiences—I think some people forget that.