So many people dream of living more exciting and exhilarating lives but often find themselves stuck in a rut and caught up in everyday routines.

Nik V Vasilyev – Nik V for short – is not one of those people. An active lifestyle expert and talk show contributor for CTV, Global TV and CBS, Nik V loves adventure and taking risks. His interests range from fashion and fitness to tourism and tech, and everything in between. He’s a modern-day “jack of all trades” who is mastering them all, too.

We connected with Nik V to get his tips for taking risks, stepping outside your comfort zone and living a bold, brave and beautiful life.

First things first, what exactly does being an active lifestyle expert entail?

As an active lifestyle expert, I work with producers (and sometimes brands) to create segment structures and conversation flows for talk shows. Then I go on set and perform with the hosts of the show. Active lifestyle is a category I created to have more flexibility to talk about tourism, tech, fashion, nutrition and anything an active living human being does. Towards the end of last year, I started moving into a more general topic space and taking on roles closer to co-hosting. Performing as a talk show co-host is the next level of skill development for me in terms of broadcast. 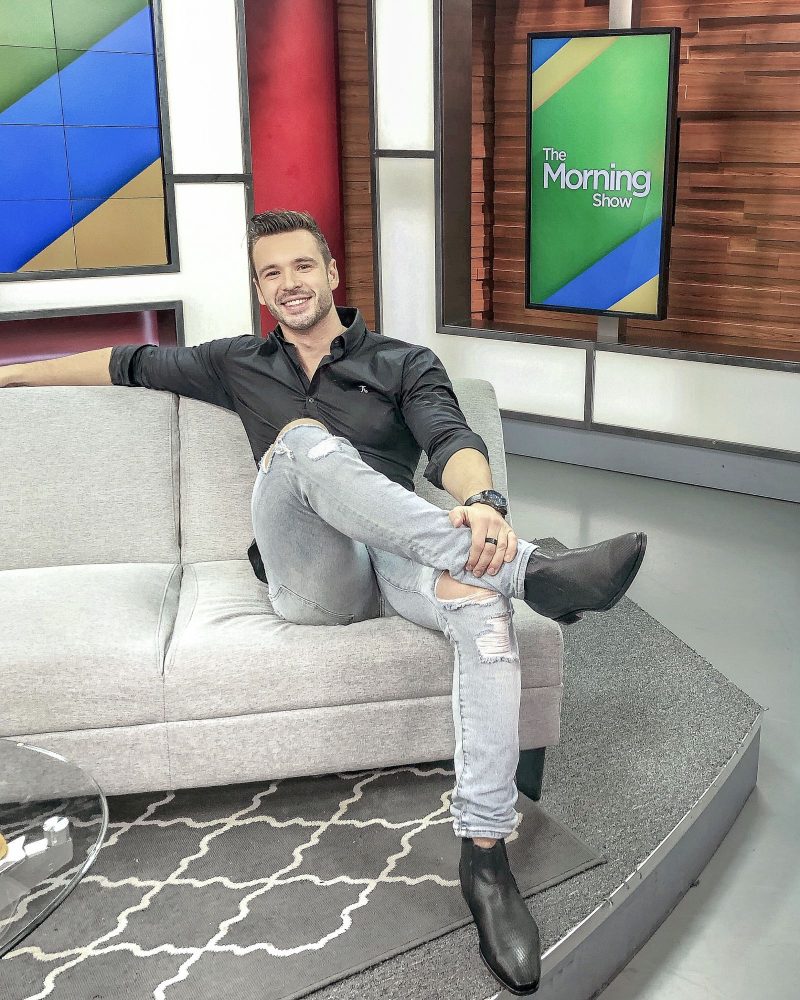 You continuously challenge and push yourself to go to the next level. What do you think is the biggest factor holding people back and preventing them from living their best life?

Fear of messing up the first step on the path towards their ultimate goal.

People get so caught up with their end goal that they think their first step needs to set them up on the perfect path for it. The truth is that the path to your ultimate goal will be paved 99% with failures and 1% polished with successes.

It’s fair to say you’re a bit of an adventure junkie. Tell us about one of your most epic experiences.

Last summer, I landed a contract to work with BC tourism on a broadcast related project. I had a jam-packed day starting from 6 a.m. and ending at 8 p.m.

By 8 a.m., we were on the ocean waters in Squamish paddle boarding through the harbours. The winds picked up and we had to battle the currents the whole time; but of course, we had to make the videos look graceful and fun! It was gruesome.

11:30 a.m., we got picked up by a convoy of supercars. I was tasked with ripping a Ferrari 458, a Lamborghini Gallardo and a Chevrolet Corvette ZR1 through the winding roads of the Sea to Sky Highway on the west coast. I ended up racing the convoy leader and earning a lot of respect.

1 p.m., after having made a few stops along the road to switch cars and take in the sights, we hopped out at Whistler and took gondolas to the highest peak of Blackcomb Mountain. We then took a 15-minute drive to the opposite side of the peak and a 25-minute hike into the woods to the top of Sasquatch, Canada’s fastest and tallest zipline – a 2 km line almost straight down making you reach speeds well over a 100 km/hr. Ever zipped off a mountain? It’s fast…trust me.

By 3 p.m., (after a brief lunch) we rejoined the convoy of supercars and took the roads back to Vancouver with longer stops in other scenic spots to film, exchange cars again and of course, take pictures.

I arrived back in Vancouver at 8 p.m., just in time for a late evening business meeting. I’d say that day trip was one of the most adventure-packed 24-hour periods of my life.

For those of us who are a little less adventurous, what are your top three tips to help us take more risks and step outside our comfort zones?

I’m a task-oriented guy. Yes, I love adrenaline and risk, but I won’t do something that’s extremely vague.

Break the big dreams/aspirations/goals into much smaller steps. Make those steps very specific so that they can become a to-do list. Scratch them off one by one as you conquer the road to your big dream.

But if we’re talking something like cliff jumping, absolutely do NOT break it down into smaller steps. Make sure there are no rocks, take five steps back and run off that cliff haha! The more you hesitate, the less likely you are to jump. 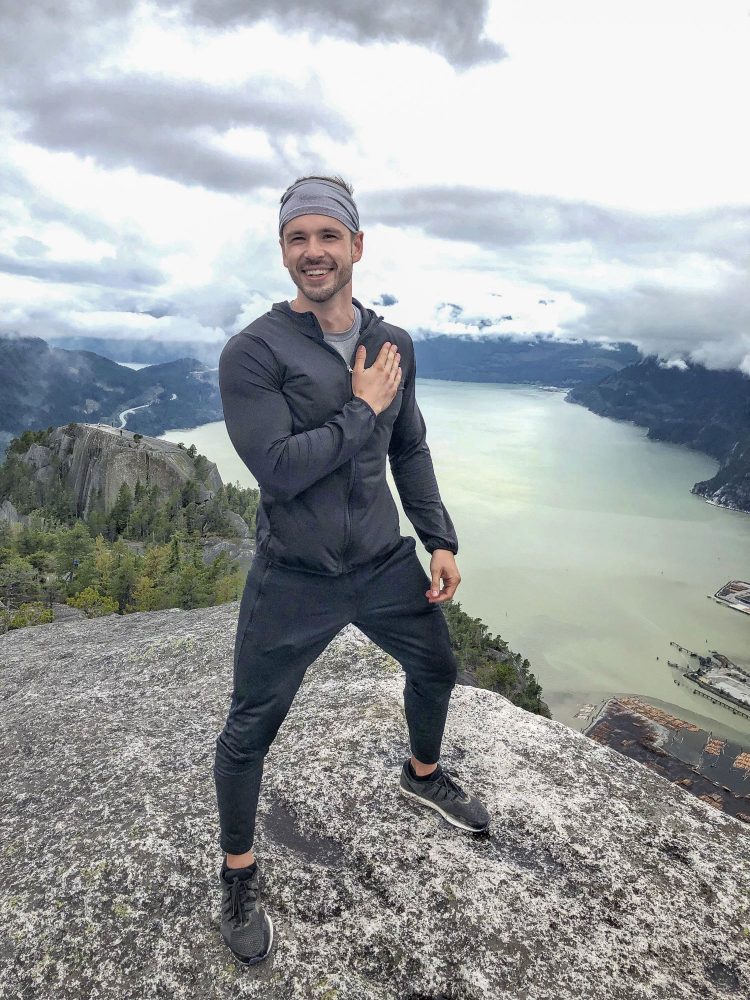 What are some of the benefits we can expect by living life on bolder and braver terms?

High risk, high reward. I’ve never really been given anything in my life without a fight. So my belief is that living passively and waiting for opportunities to be given to you (or simply appear in front of you) will only lead to mediocre options. The better, more lucrative, more fulfilling, more colourful and more sought after opportunities will always be the hardest ones to get.

Living a bold, brave life of actively chasing opportunity will put you in positions to reach higher rewards.

What’s your message for people who want to put themselves out there more, but are afraid of change and the unknown?

Whatever you decide to do – whether it’s your personal brand or a new invention – your first, second and third try at it won’t be the end all and be all. I say this not to discourage your first try, but to hopefully relieve some of the pressure.

Thomas Edison only got the light bulb to work on his 1,000th try. He had 999 lessons before he got it right. Imagine if he had stopped before even trying the first one.

I’m just getting into acting now. You better believe the first year or two of roles won’t show a top level of acting. It’s an unknown feeling for me and it’s the start of a new series of lessons I need to endure and learn from.

You recently made a big move from Toronto to Vancouver. What was the motivation behind that?

I’ve grown very quickly in Toronto in terms of the talk show market. I’ll continue to maintain and grow that relationship with my established network.

While the talk show portion of my work is important, it was always only one side of the coin I wanted to show. The other half was to actually act and create entertaining content from the other side of the business. I want to be the person that can be interviewed about a project and also be the one running a show.

Vancouver has a bursting market of top-rated TV shows and seems to only be getting bigger. Given the portfolio of action/adventure shows being shot in the city (Arrow, The Flash, Legends of Tomorrow, Supergirl, Supernatural and the upcoming Wu Assassins) and my background in combative sports (Muay Thai, Wing Chun, Sanshou and kickboxing), Vancouver is a place where I can learn that specific style of acting from the people that have had tons of experience in that genre and develop my network into those shows.

I moved to learn a new skill set, to dabble in the other side of the entertainment industry and to grow myself as a professional; the better weather and access to outdoor activities are just added perks.

Finish this sentence: When faced with a challenge I…

Drop my chin, get my hands dirty and focus on keeping my feet moving forward.

Follow Nik V on Instagram @TheNikV and check out the video below where he talks about how to live a healthier and more active lifestyle: