We often associate the cost of being unhealthy with effects we are yet to face; some day in the future.

Sure, we can sack off going to the gym again this weekend and prioritize tequila shots over holistic living and healthy eating. We know it’s the wrong thing to do, but if we won’t have to face the consequences for another 20 or 30 years, it’s easy to put our well-being on the back burner.

So what if we told you that choosing an unhealthy lifestyle could cost you as much as $8.6 million from behaviours like smoking, drinking or eating too much in your lifetime?

The Toronto Star reported on data from the Canadian Men’s Health Foundation – a non-profit organization based in British Columbia – that shows how a lifetime of unhealthy habits could set you back millions of dollars. CMHF are dedicated to inspiring Canadian men to live a healthier life.

We’ve told you about the monetary cost of our vices. While there are plenty of reasons to be healthy that have absolutely nothing to do with dollars, if they don’t motivate you to stay active, surely this research will.

The study was conducted by Krueger & Associates, who operate out of Vancouver. After plenty of population data analysis and crunching numbers, they came up with three prototypes of men who drank, smoke, and were overweight.

They were as follows: 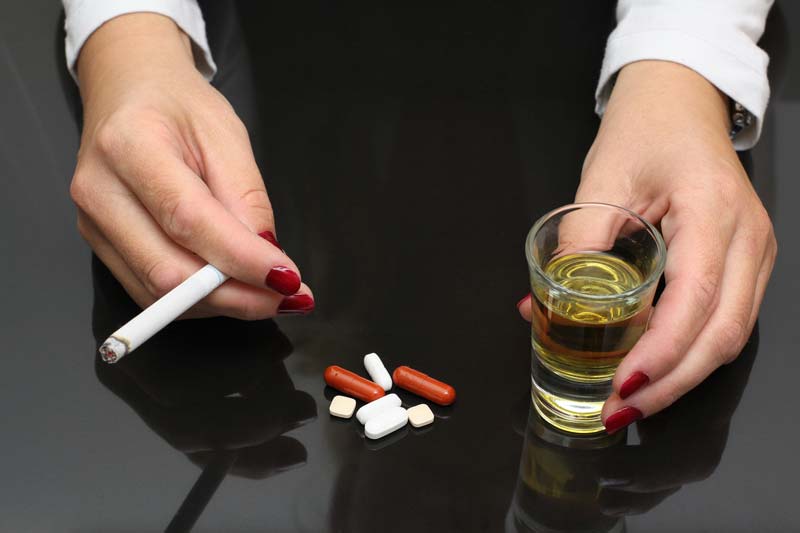 If Low-Risk Joe stopped drinking, smoking and avoided high life insurance premiums associated with these behaviours, he could save $275,000 over his lifetime. However, the lost investment potential of the money had he invested it between 30 and 75 is a staggering $1.7 million.

Most shockingly of all, High-Risk Joe would save $1.1 million, with a lost investment potential of a staggering $8.6 million.

It’s an extreme look at unhealthy eating, of course. Even in the lower risk camp, we’re seeing excess that many of us probably aren’t guilty of. Smokers may get through five cigarettes a day, but having an alcoholic beverage every single day of the week is unlikely to be a commonality.

But as the summer months unfurl and we spend more of our time cramming in sunlight hours on patios and perhaps enjoying a little toke, it’s easy to see how quickly these tiny habits can grow and rid us of our health and money.

The study calculated that smoking costs men 10 years of their life, while being obese costs 5.8 years. Alcohol consumption costs 7.9 years.

Here’s how making some small, but important lifestyle changes can help your body and your bank balance:

Cut Out Weekday Drinking
Is that “one drink after work” that turned into five or six on a Wednesday really worth the foggy head and lack of productivity at your desk the following day? Well, only sometimes. By making your week about work and the occasional bevy on a Thursday night, and the weekend a time to relax, you’ll save pounds and dollars.

Summer Sports
Now is the best time of the year to find a fun new hobby. The sun’s out, the days are longer, and you might be thinking about getting into a bikini or swim shorts for the first time in months. So choose an outdoor activity like volleyball, tennis, or disc golf and you’ll be feeling trim and saving money when you could be at the pub.

Quit Smoking
Okay, okay, so it’s not exactly a small alteration if you’re a smoker, but it is a lifestyle change that no former smoker has ever lived to regret. Forget the days of kidding ourselves that “smoking is cool.” Now that we know the risks and the costs, there’s no good reason not to quit today.

Stock Your Cupboards
A lot of the reason we end up eating out or grabbing our third takeout of the week stems from a lack of planning. We don’t actually want to spend all that money and eat those empty calories with such frequency – but if we have nothing in our pantry, it’s easy to fall into the trap. Make the time to go on a big grocery shop and stock all your favourite food and vegetables.

Get Off the Subway One Stop Earlier
For many of us, biking or walking to work just isn’t a viable option. But that doesn’t mean your daily commute can’t incorporate a little working out. Try hopping off the TTC a stop or two early now that the nights are lighter and warmer. Take a comfy pair of shoes in your bag and work up an appetite for dinner.

Stop the Drunk Food
We’ve all felt the call of a burrito or burger after a night out. But eating 1000 calories after drinking many, many more, with absolutely no active hours to burn them off, is a disaster. Chances are you’ll want to sleep the minute you’ve received your fast food order, so flex that willpower muscle, put down the poutine, and go to bed.