We all like drinking beer, but who has the time to stand next to the recycling, cutting up the six-pack rings afterwards?

The answer is: a lot of people. The problem is: no one does it.

And since your decision to toss back a few cold ones shouldn’t have to endanger our planet’s marine life, some very clever people at Saltwater Brewery have come up with a much better solution.

The US brewery from Delray Beach, Florida, have created six-pack rings that are completely biodegradable, which is a massive win for the environment.

But it’s an even bigger triumph for sea animals – because the rings are also 100 per cent edible too. Now, instead of strangling the sea creatures, the six-pack rings will provide a tasty snack. 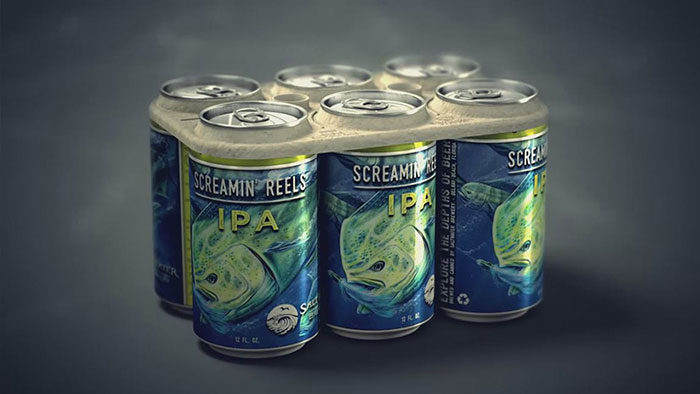 In other words, Saltwater has created drunk food for sea turtles and fish. Yum.

Of course, the rings should never make it into the ocean in the first place, but understanding that human beings are too busy lazy to remember to take care of the planet, they’ve come up with a great plan B.

And given the sad news that by 2050 there will be more plastic garbage than fish in the ocean, it’s clear we could do with some innovation to make sure there’s still a planet left for The Founders and all the subsequent generations to enjoy.

Last year Adidas released a prototype shoe that was made out of plastic ocean trash and created zero waste. Plus, a Dutch 20-year old made waves when he created a device called The Ocean Cleanup Project, which he hopes will remove 7,250,000 tons of plastic in the next five years.

Saltwater is hoping that other breweries and drink makers will take up the idea too, and are willing to share the technology so that the ocean might be less littered in the future.

If there was ever a time to enjoy an ice cold beer to celebrate, it’s now. Cheers.