If you’re a human being with a lateral septum (that’s everyone), chances are finding a job is pretty high on your list of concerns.

But in these crazy economic times, who the hell knows where to look and what to pursue. If you trust database of numbers with your future, Indeed.com is worth glimpse. Indeed is a job-indexing site that regularly compiles data on job openings across the country, measuring job increases and decreases across all industries as a percentage compared to either last month, last quarter, or over the past year.

To get the most accurate picture of job opening trends, let’s take a look at how this October’s positions stack up against this time last year.

According to the statistics, Media has seen the largest increase in job openings. Since October 2014, the media industry seen a 23 per cent increase in demand for employees. The majority of these jobs are in graphic design. It’s unclear whether these numbers include “unpaid but the exposure’s great” craigslist writing gigs. 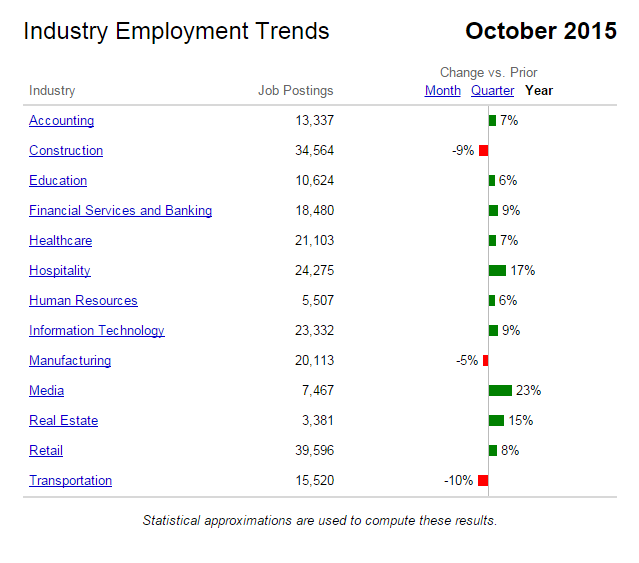 The hospitality industry has also seen demand for work soar, with a 17 per cent increase in openings compared to last year. This is largely the result of increased tourism from South of the Border as our loonie continues being meek. Cooks and front desk agents are especially sought after.

Despite its shaky foundation, Real Estate seems to be a somewhat stable industry for work, seeing a 15 per cent increase in job openings. Great news for those who’ve always dreamed of being sales associates or property administrators.

Transportation, construction, and manufacturing, meanwhile, have seen a decline in job postings. Interestingly, Toronto is the top location for jobs in all industries except construction, for which Montreal is in desperate need.

Now that you know what’s open, it’s up to you to get hired.