If these walls could talk. Or sing for that matter.

Recently, we told you about a new Canadian project that will put Calgary in the spotlight like never before – in part because it’s being built on the shoulders of one of the city’s musical giants: the iconic King Eddy Hotel.

Set to open its doors in Summer 2016, Studio Bell, home of the National Music Centre (NMC), is set to become a pillar of the arts community. Not only will the anticipated museum revitalize the neighbourhood, it will preserve a major part of the East Village’s distinct musical history in doing so.

It’s no small undertaking either; the $191 million, 160,000 square foot architectural piece of living art will become a must-visit for music lovers around the world, with its education programs, interactive exhibitions, live performances, radio broadcasting facilities, and a large collection of instruments and artifacts. It will also be the permanent home to three halls of fame: The Canadian Music Hall of Fame, the Canadian Songwriters Hall of Fame, and the Canadian Country Music Hall of Fame Collection.

This is the kind of building that changes an entire city.

So NMC is definitely playing the right note by including the reassembly of the iconic King Eddy Hotel, quite literally, one brick at a time.

Once Calgary’s undisputed ‘Home of the Blues’ (and arguably Canada’s oldest blues bar), the King Eddy saw the likes of Buddy Guy, John Hammond, and Pinetop Perkins take to its stage. For nearly 100 years (from 1905-2004), the Kind Eddy was a beacon for blues aficionados until falling on harder times and having to close up shop.

Back in 2013, due to severe structural issues, the Eddy was taken down brick by brick, placed on a numbered grid, and then rebuilt like a great puzzle. This incredibly detailed and expensive process was done in accordance with heritage standards to ensure the Eddy would stand for another 100 years.  And now you have the opportunity to contribute to its re-emergence as one of Calgary’s most important buildings. 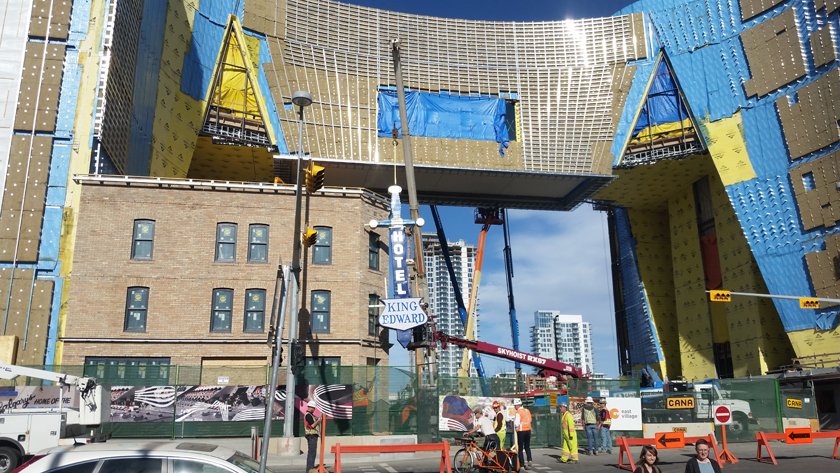 In fact, the best part about the King Eddy’s restoration is that you’ll be able to leave your mark in both the building’s past and future. With a simple $250 contribution you can engrave a brick with a personal message that will be featured on the Cornerstones Wall inside the restored live music venue..

So when live acts – from pop and rock, to blues and soul, and everything in between – once again start to take the stage at its famous bar, your name could be written all over it.

Those that visit the Eddy will also have the chance to see a true piece of rock ’n’ roll history as the famed Rolling Stones Mobile Studio will be on permanent display right beside the venue. The mobile studio will be a major draw for musicians and producers who wish to use the same recording gear as legendary acts like the Rolling Stones, Bob Marley, Lou Reed, and Led Zeppelin, just to name a few. This is just one of three famous recording consoles that are available to participants in NMC’s artist in residence programs.

In addition to the familiar drink and music filled vibe, you’ll also recognize the building’s iconic neon sign in the shape of a sword, which will be turned back on when the Eddy opens its doors next year.

And if all that doesn’t make you want to become a regular for the King Eddy’s next 100 years, we don’t know what will.

In fact, here’s a little more inspiration to help get you excited: