The Montreal Grand Prix is just around the corner and everyone that has experienced it will tell you it’s much more than just a race.

Our city truly comes alive during these three days.

Live concerts, lavish parties, luxury cars, food fairs, brunches, you name it, and it’s on. And as exciting as all this sounds, it can also be extremely confusing if you aren’t prepared. So to help you plan out the busiest and most anticipated weekend of the Montreal summer, we made a Grad Prix guide that should fill your social calendar up accordingly.

The Grand Evening
For three decades, Montrealers have embraced a great tradition: celebrating the beginning of summer with the Formula 1 Grand Prix du Canada. Since 2010, The Grand Evening party has been one of the most luxurious and prestigious soirees to attend. A glittering benefit party with a slew of the crème de la crème in attendance, this one might empty your wallets a little…but it may also be worth it.

Grand Prix Hamptons Chic at The Ritz Montreal
One of the most coveted parties of the year returns on June 5th at the glorious Ritz-Carlton. This year, guests are invited to discover a “Hamptons chic” themed evening with the Ritz transforming to reflect the iconic style of the luxurious Long-Island escape. The night will feature an open Moët & Chandon champagne bar, delicious food stations, late-night dessert stations, music by rock star DJ YO-C, live musical performances throughout the evening, an open bar until 2am, and our very own Notable x Glenmorangie booth.

Pit Stop at the W Hotel
Another party not to be missed will be taking place at the chic W Montreal. This year, W Montreal and E=Mc2 events teamed up together to showcase Canadian talent in fashion and music featuring MASABNI and emerging indie rock band Fast Romantics. This will be an intimate and inspiring experience you won’t find anywhere else. #MtlPitstopParty takes place on June 6th from 5pm to 8pm.

Matinee Brunch at the Peel Paddock
Matinee brunch is back for another Grand Prix themed Brunch Party and you know it will get wild. Belvedere Vodka has built a terrace on Peel St., in the heart of the Grand Prix festivities, and on Saturday June 6th, it will serve as the setting for Matinee Paddock. Come feast on a specially catered brunch menu while basking in the summer day and dancing to the beats of residents Dj Toddy Flores & Danny Torrence.

Muralfest x Grand Prix
In very heart of the action on GRAND PRIX / MURALFEST Weekend (Boulevard Saint-Laurent & Rue Prince Arthur) Peter Farmer will be representing Uber in a live painting event showcased on a massive canvas over two days (June 6th and 7th). For an epic Muralfest after party, check out this event at APT 200 on Saturday night with BOI-1DA and myfrienderic.

Momentum Weekend at Auberge Saint-Gabriel
Auberge Saint-Gabriel has now become a staple for Grand Prix lovers. The trio of owners, Guy Laliberté (Cirque du Soleil), Garou and Marc Bolay, have not spared any expense in order to create unique soirées during the Momentum weekend, which will be held from the 4th to the 7th of June. Culinary masterpieces, fine and prestigious liqueurs, intoxicating music every night, pilots, local and international celebrities…you name it, they will have it. 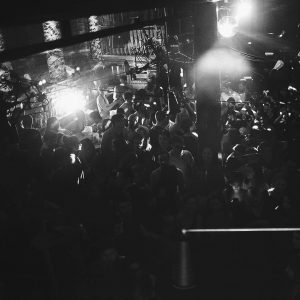 The Notable x Santos “Best Sunday Ever” Brunch Party
Get ready to experience “The Best Sunday Ever” on June 7th at Santos in Old Montreal. Kicking off at 2pm, the day is all about having some serious notable fun, which means you can expect beer pong, water guns, a baby pool, blow-up palm tress, ping-pong, mimosa stations, DJ Thomas H on the decks, delicious food, and much, much more. Did we mention the street will be closed off? That’s right, this is going to be a serious block party…

Grand Prix on Crescent Street
For decades, Crescent Street – between Sherbrooke and Saint Catherine – has been the destination for race fans during the Grand Prix weekend. The live stage acts are just the beginning of the entertainment, as the festival brings numerous activities such as racing simulators, race car displays, food and drink stations, night concerts, and more.

The Little Italy Racing Weekend
The Little Italy district will be hosting their annual Little Italy Racing Week-end, presented by Lexus Gabriel. More than just cars, it’s a weekend to enjoy the spirit of the Italian lifestyle during the Montreal Grand Prix. Besides all the great food and live entertainment, you can expect more than fifteen auto/car clubs exhibiting their speedsters to satisfy all tastes including classics, vintage, dragsters, NASCARs, and even Indy Cars.

Ever wondered what an enchanted underground forrest in the middle of downtown would look like? Then check out the brand new Soubois at 1106 de Maisonneuve West. With a slew of some of the top hosts in the city and great DJ’s, the festivities will be grand at this new hotspot.