Despite his hard-nosed and intimidating reputation on CBC’s Dragons’ Den, Kevin O’Leary was warm and welcoming on Tuesday for the launch of his first-ever photo exhibit, Kevin O’Leary: 40 Years of Photography, at First Canadian Place in Toronto. Unbeknownst to us, the entrepreneur, investor and outspoken TV personality has an eye for photography, and has tens of thousands of photographs from dozens of countries, spanning multiple decades. The images capture remarkable moments from his travels and life, like the moon-like centre of Greenland, Cape Town’s seaside, a rocket launch in Northern England, Jim Morrison’s grave before the bust of him was stolen from it, a stunning archway in Puerto Rico, recent shots taken in St. Barth’s and Nantucket, and even a selfie from 1975 (“when I still had hair,” he jokes), plus many more. 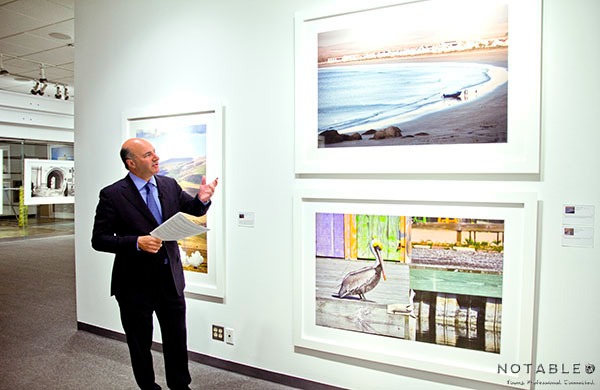 The exhibit will occupy the gallery space in First Canadian Place for the next six weeks before it makes its way across the country. O’Leary announced that funds raised from the sale of his photographs will go toward his Future Dragon Fund Contest, with the goal of encouraging innovation and entrepreneurship in our future generations. Have a talented niece or nephew? The contest will award 10 ambitious grade 11 and 12 students who show promise as current or future entrepreneurs with $5,000 to fund and pursue entrepreneurial projects of their choice. The Future Dragon Fund Contest portal opens October 23; details and regulations can be found online.

In addition to his appearances on CBC’s Dragons’ Den and CBC News Network’s Lang & O’Leary Exchange, O’Leary is the chairman of O’Leary Funds and O’Leary Mortgages, as well as the founder of O’Leary Fine Wines. Previously, O’Leary founded and was president of SoftKey (later called The Learning Company), a global educational software company. Naturally, then, we took the opportunity post-tour to chat with him about business, entrepreneurship, and even marriage. 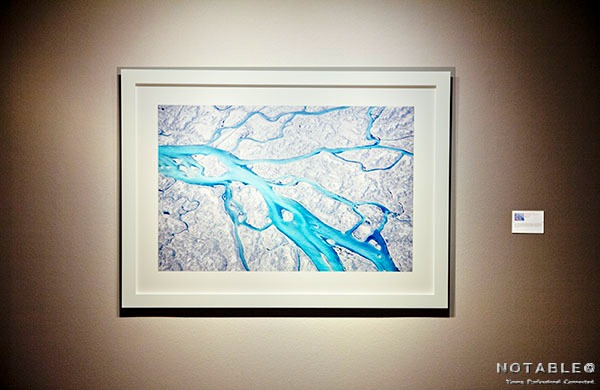 Your children will soon approach the young professional age demographic. What advice do you give them about being successful, both in their professional life and their personal life?
I’ve told my kids that life is very serendipitous and you don’t know how your journey is going to end at all. You can set goals, which is obviously very important, but whether you are going to achieve them in a particular way, or through a particular path, is unknown. I look at my own journey, and I started out in life as a cinematographer. Though that’s not the way I ended up, I’ve been able to come back to it. I don’t know what’s going to happen to my kids, but I’ve learned not to guide them in any one direction. You can give them some moral values and concept about how the world works, but their path is unknown, even to them. So I tell them to think big and don’t hold back. The world is a chaotic, kinetic place; there’s a lot going on, bad stuff happens. Things don’t always go as planned, personally or professionally.

Is there something you have, a mantra or personal affirmation, that you say to yourself when the going is tough?
I tell people to live by this credo: don’t ask permission, ask forgiveness. That works. Don’t ask permission, just go and do what you have to do. You have to blaze your own trail and don’t let anyone tell you that you can’t do something, just do it. If someone doesn’t like it, ask for forgiveness or move on. Don’t let anyone else’s opinion get in your way or change your course. As long as you have it in your heart that you need to get to a place, just get there. If someone gets in your way, you can go around them, negotiate with them or go right over them. It’s a bit of defiance. 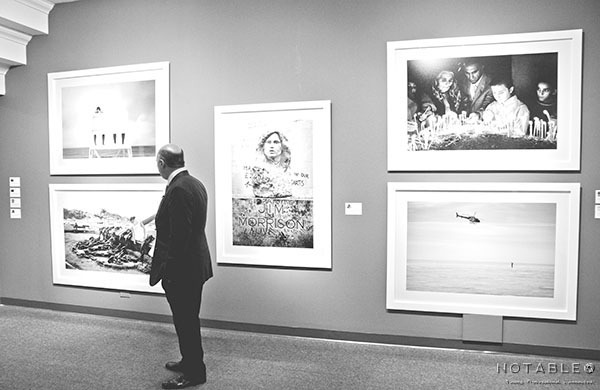 Is this a mentality that you’ve always adhered to, or did it develop over time?
I had to figure it out for myself. I have the benefit now of being able to look back on my journey and realize the mistakes I have made. I am a big believer that any successful entrepreneur can and should give back to the next generation by sharing their mistakes as opposed to their successes. That’s why I write books, to share my knowledge as an entrepreneur so that others can learn from my mistakes. I talk a lot about what works and what doesn’t, commonalities that work now and will 100 years from now. There are certain characteristics of successful entrepreneurial endeavours. And entrepreneurialism is important; it’s the only way private jobs are created in this country. The pursuit of wealth is a noble pursuit, and it’s the pursuit of personal freedom. I don’t need more money, I just need more time.

Speaking of entrepreneurship, anyone can start a business; what would you say it takes to properly grow a business?
The challenge with business is actually executing a business plan and making it work day in and out, which is not easy. Anyone with a great idea needs to have people that can fill in the execution of certain areas of expertise. Nobody has all the talents themselves. As the business grows, my strategy is always to get better and better people involved. The reason that O’Leary Funds is doing so well is we have really good people working for it; it was a small fund and is now almost a billion dollars. We have great portfolio managers, sales people, administrators, compliance lawyers and everything in between. I have the best people working for me; you have to accept that others are going to be better at you at some things, and you have to bring in others to do the things you are not good at. You can’t run a business with one guy, it’s just not going to work. You can’t be in control of it all. 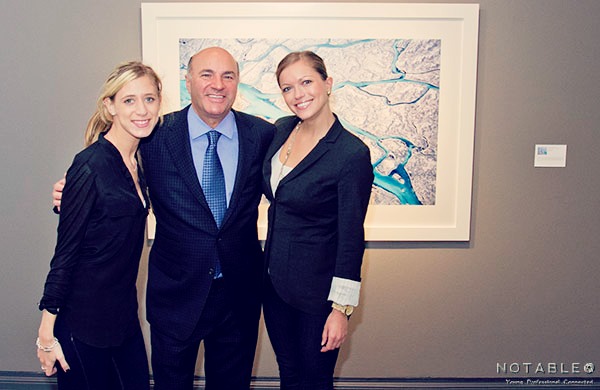 Great successes in business are partnerships, like Steve Jobs and his engineering partner Steve Wozniak. This is also the case in marriage. Marriage and business are very similar in a lot of ways. If you look at marriages that last 30, 40 or 50 years, they are two very different people; they compliment each other. After five years, it isn’t about romance anymore. It’s about the business of the family. It’s about respecting each other’s talents and getting out of one another’s way when you need to.

You discuss this in your book, Cold Hard Truth on Men, Women & Money…
I’m glad you read it. It’s funny, it was number one in Canada right away and stayed on the bestsellers list for 27 weeks, which was a huge surprise for everyone… because who wants to read about stuff like that? Well, mothers apparently do; and they want to pass that advice to their kids when it comes to marriage. I mean, 52 per cent of marriages fail within the first five years, but it isn’t about infidelity – it is about money. People will say things like, “I found out he was a gambler,” or “I found out she owed her brother $100,000,” and things like that can ruin a marriage. My whole view on this has generated a bit of controversy, but I know I am right. We actually launched the book in the US yesterday; I was in New York for the launch. It will be interesting to see how well it does there.

Another thing that resonates from that book was the concept of “ghost money” – any comments on that? (O’Leary defines ghost money as “dead money, money wasted on stupid things, money that should have been invested instead.”)
If an intern in my office buys a Starbucks, I would fire them because they can’t afford to buy that. That’s so stupid; it’s a 15-cent cup of coffee, and they’re spending $2.50 on it – that’s insane. I can’t even give those guys $2.50 for a cup of coffee. Nothing against the company, but I refuse to get screwed by them. It’s simple. 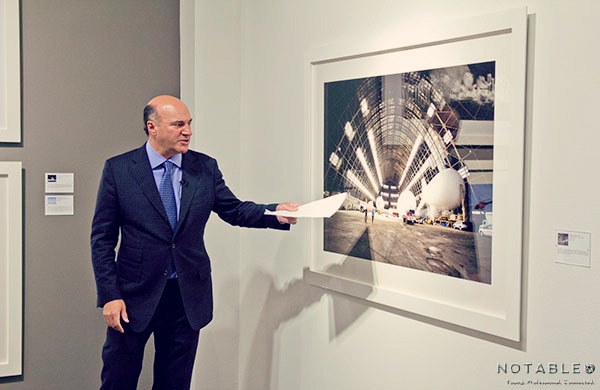 I’m glad I threw out my coffee cup before I walked in. The exhibit reveals your love for photography and the arts; do you have any other artistic interests? What draws you to photography and art?
I am collector of other people’s photography as well. I also collect art as an investment. I am interested in editing and video editing; I am just interested in television in general. I am actually surprised that I am on this side of the camera because in the 1980s I started on the other side. It’s been an interesting journey; every day it’s something different. I don’t have a problem with boredom at the desk. Television is a wacky business. It’s pretty crazy, stuff just keeps coming at you. I am enjoying it. I could never be retired right now; I tried it, very boring. I’ve been on every beach on the planet.

Why did you choose this medium to raise funds and awareness for your charitable initiative?
The visibility. You can go into a city, get a gallery space like this, and make it a focal point for a whole bunch of activity for six weeks through different events – everything from seminars and press events, to parties with financial institutions to discuss the photography. Usually when you launch a charity in the press, there is all this hype, but it is quickly forgotten. This allows a focal point to keep it alive and exposed to different audiences across the country. CBC will offer local support throughout, and the charity will be in focus for six weeks in each city.