Let’s not be prudes here.

We all know that when you start talking to someone and things start to heat up, you’re inevitably going to start sexting them. (In fact, research shows you should be.) Because sexting can be a lot of fun, when it’s done right.

So if you’re wondering why the girl you just showed your crown jewels to isn’t rushing to your bedside, perhaps you’re approaching the situation all wrong.

Just like all extra curricular activities, there’s a proper way to sext.

DO: Sext After a Drink
Just like actual sex, having a little liquid courage might make things interesting. So if you’ve had a drink (emphasis on ‘a’) don’t hesitate to initiate a sexual conversation.

DON’T: Sext While Drunk
Don’t message someone when you’re blackout drunk. We promise you’ll regret pretty much everything you shared when you wake up in the morning. DO: Get Creative
Since you’re hiding behind the security of a phone, you can technically say whatever you want. Use this as your opportunity to tap into what you’re really into. Don’t be afraid to play out some sexual fantasies, because the receiver of the message may catch on and be into trying this out too. But as will all sexting, go slowly – don’t just jump into your favourite fantasy before they know you’re no longer IRL.

DON’T: Send Emoticons
Okay, we’re all adults here. Sending multiple eggplant and winky-face emojis will not only not be turning anyone on, it’ll also be coming across as creepy. DO: Contribute Equally
Make sure that you’re equally contributing to the conversation. There’s nothing worse than writing a very explicit message and the recipient just replies with “mmm yeah.”

DON’T: Write Lengthy Messages
What makes sexting fun is waiting for a response after sending a juicy message. So don’t send someone a graphic novel. The recipient will just get bored and lose interest.

DO: Start Things Slow
Just like it’s important to engage in foreplay before sex, it’s important to ease into sexting. Building sexual tension can make the interaction and anticipation that much more enjoyable. Not to mention it’s extremely abrupt to receive a text that just says, “I want to f*** you right now.”

DON’T: Forget to Be Yourself
You shouldn’t write a graphic rundown of what you actually want to do to someone and then act like a shy Catholic school girl in person. Chances are if they were receptive over text they’ll also be interested in person too.

DO: Give Feedback
If you like what your partner is telling you, let them know. Your partner can’t gage your reactions, so they’ll want to know that you’re into what they’re saying. Positive reinforcement is exactly what your partner needs to keep the dirty messages coming (pun intended).

DON’T: Say Something You Won’t Actually Try
If you haven’t actually tried what you sext someone in real life, avoid sending it. Because when you eventually make it to the bedroom and your partner wants to try what you sent, things are going to get awkward.

DO: Delete What You Send
Even if you’re dating the person you’re sexting with, when the conversation is finished make sure to cover up your tracks. You don’t need a family member or a friend to discovering the stash of nudes on your phone.

DON’T: Show Your Face
If you and your partner do decide to send each other risqué photos, that’s totally fine. But make sure you can’t see your face. You don’t want the photo to circle around and to come back and haunt you in years to come. 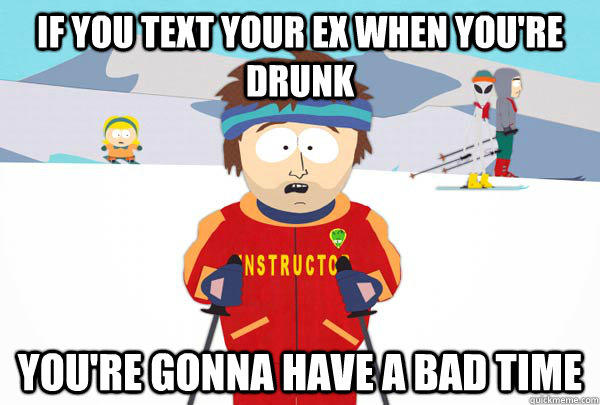 DO: Respond Promptly
If you take more than twenty minutes to answer every sext your partner sends you, they’re going to loose interest in the ‘conversation’ quickly. If you really want things to heat up, you should reply as promptly as you can. So avoid sexting when you’re busy at work or out with friends. Wait until you have some free time on your hands.

DON’T: Send Surprise Photos
No matter how comfortable you might feel with someone, don’t ever send them an unsolicited nude photo. There’s nothing worse than receiving a raunchy pic while riding on the subway crammed between passengers or having it pop up on your computer at work.