Have big dreams of being an astronaut?

Last week, the federal government announced it would hire two new astronauts. Applications to the Canadian Space Agency are now open, so if you’re in the market for a career change, now’s the time to get on that resume.

“Our astronauts have been a source of national pride for our country. If you have been aspired to go beyond our planet’s frontier, now is your chance to make this dream a reality,” said Minister of Innovation, Science and Economic Development Navdeep Bains at a press conference last week at the Canada Aviation and Space Museum in Ottawa. He was joined by Canada’s two current astronauts, Jeremy Hansen and David Saint-Jacques (who joined by video conference).

He did not say if the newest astronauts would make it to another planet, stating only that they will advance critical science and research aboard the International Space Station.

So, do you qualify?

According to the agency, they are seeking candidates with “an academic background in science or technology, excellent health, and a wide range of outstanding qualities and skills.” The most important factor, however, is something most of us gain experience in daily: the candidate’s personality under pressure.

Those who make it past the first selection round will then take part in an intense and gruelling selection process that takes almost a year and involves written exams, interviews, and an assortment of physical and mental fitness tests.

Canada last hired two new astronauts back in 2009, selecting Saint-Jacques of Quebec City and Hansen of London. Both have been training ever since, but are yet to fly into space. St-Jacques is booked for a rocket bound for the International Space Station in November 2018.

Here are four other important Canadian astronauts you may also want to know about before you apply (just in case you’re in need of a little inspiration):

Roberta Bondar:
As you may recall from way back in childhood days, Roberta Bondar was the first female Canadian astronaut in space. The neurobiologist and astronaut received university degrees in zoology and biology before becoming a neurologist. She then joined the Canadian Space Program and trained in the U.S. for three full years to do science in space before becoming the first female Canadian in space in 1992. Bondar flew on the Discovery space shuttle as a payload specialist on the first International Microgravity Laboratory Mission.

Chris Hadfield
Social media-loving Chris Hadfield is perhaps the most known Canadian astronaut.  Hadfield became a global celebrity thanks to his constant tweeting while aboard the International Space Station in 2013. He embarked on the five-month space stay in December 2012, becoming the first Canadian to live aboard the International Space Station. The Sarnia native spent his early years in the air cadets before working his way up through the Royal Canadian Air Force (RCAF) and becoming an experimental test pilot. He was accepted into the Canadian astronaut program by the Canadian Space Agency in 1992, and flew on his first rocket in 1995. 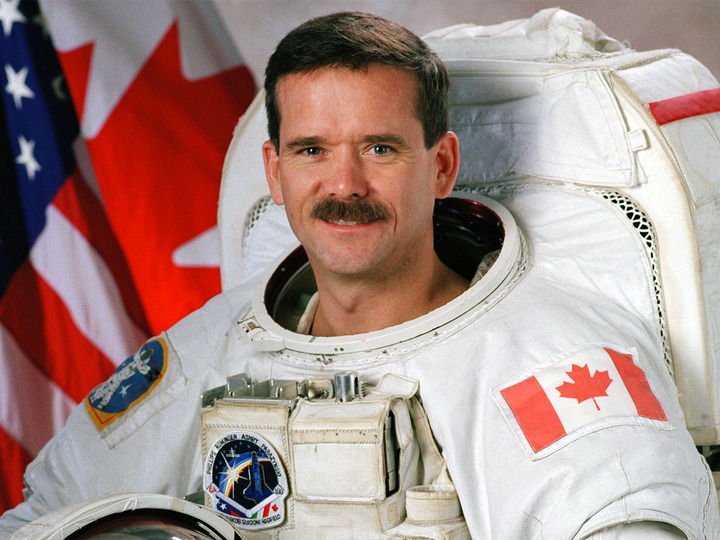 Julie Payette
Quebec native Julie Payette has completed two spaceflights, STS-96 and STS-127, clocking in more than 25 days in space. She has served many important roles in her career as an astronaut, including Chief Astronaut for the CSA, and other roles for both NASA and CSA, including CAPCOM. In July 2013, she was named Chief Operating Officer for the Montreal Science Centre.

Marc Garneau
Marc Garneau was the first Canadian in space. The retired military officer, engineer and astronaut took part in three flights aboard NASA space shuttles in 1984, 1996 and 2000. He went on to become president of the Canadian Space Agency from 2001-2006. And if you’re not aware (you probably should be), Garneau is currently our Minister of Transport.

So if you have big goals of (potentially) viewing earth from orbit and floating around a spaceship, this job could be right up your alley. You can apply now on the Canadian Space Agency website until August 15.