Vancouver is one of the best cities in the world to live – if you can afford it.

That if, of course, is pretty major. In fact, it’s the third biggest if among nine developed nations surveyed in the latest version of the Demographia International Housing Affordability Survey. The survey evaluated cities from Australia, Canada, China, Ireland, Japan, New Zealand, Singapore, the United Kingdom, and the United States.

The survey determined that Vancouver boasts the third least affordable housing market among cities in contention, trailing only Hong Kong and Sydney, respectively. Also concerning is that Vancouver was identified to be the fourth most vulnerable to a real estate bubble risk.

Nationally, Toronto is the only city outside of B.C. to feature in the top five least affordable cities in Canada, ranking third. Canada overall has been labelled “moderately unaffordable” by the DIHAS.

10 least affordable markets in the world: 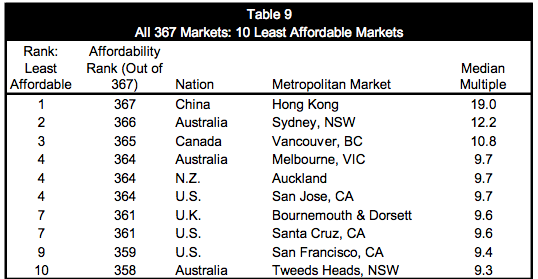 10 most affordable markets in the world: 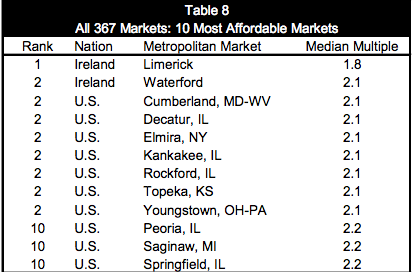 Canadians looking for an affordable place to live without resettling across borders will find solace in the affordability of Moncton, Saint John, Fredericton, Saugenay, Charlottetown, Trois-Rivières, Windsor, Thunder Bay, and Sudbury.