Be honest: you’ve second-guessed a dating decision based on someone’s name.

A new study by dating site EliteSingles reveals what their Canadian members think are the smartest, funniest, and sexiest first names.

As it turns out, if you’re name is Micheal (note the “eal” as opposed to “Michael”), you’re in good shape. If you’re a Jordan, not so much.

EliteSingles analyzed the data of 8,000 Canadian members. Researchers looked at how EliteSingles users ranked their own intelligence, sexiness, and sense of humour, then averaged those scores out according to user’s first names to determine which monikers topped the attractive list – and which definitely didn’t.

Here’s what they found: 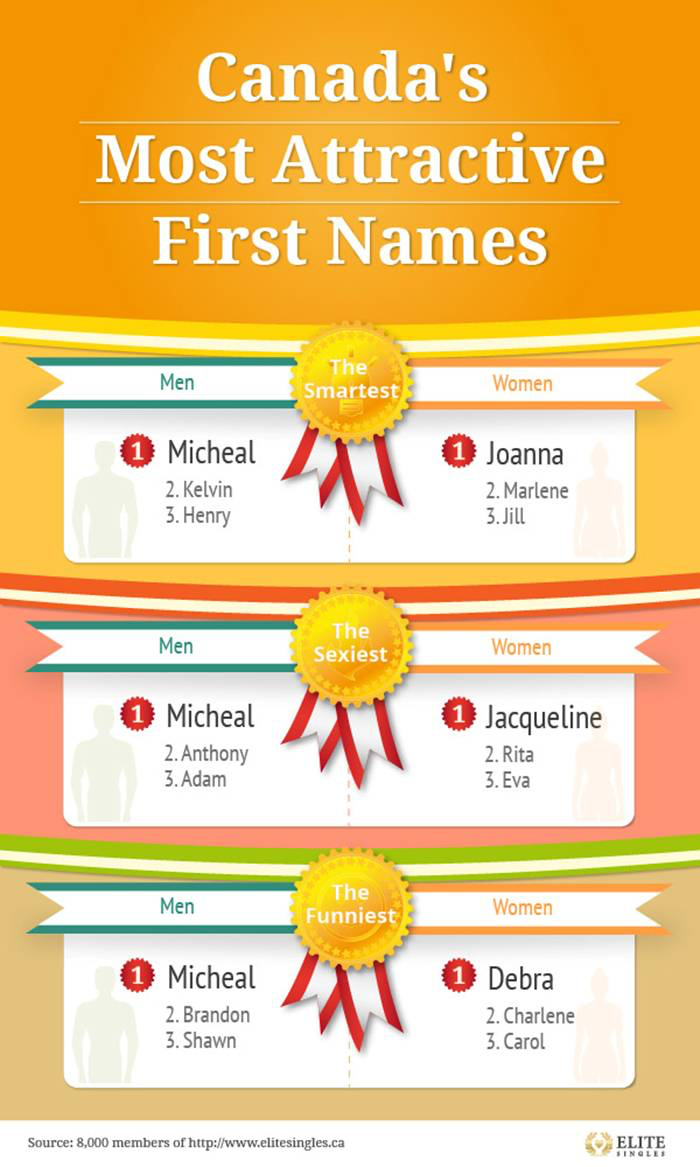 SMARTEST NAMES: Micheal and Joanna
If you’re looking for someone who shares your smarts, you may want to swipe right on a “Micheal” or a “Joanna.” On average, Joannas give themselves an intelligence rating that’s higher than other Canadian women. Second smartest is Marlene, with Jill taking third place. On the other hand, Heidi ranks in last place, sharing the bottom three with Stacey and Bella.

When it comes to the guys, Micheal claims the top rank for intelligence, while second and third place go to Kelvin and to Henry. Apparently, “Jordans” aren’t as bright. Jordans claim to be the least intelligent men in Canada, along with Maxime and Curtis.

The data was derived from the question “How intelligent are you” on a self-assessment scale from 1-7.

FUNNIEST NAMES: Micheal and Debra
If humour’s your thing (and another recent study reveals it definitely is for women), find yourself a Micheal, as it turns out they’re not only the most intelligent, but the funniest too (or, perhaps they’re simply the most confident?). When it comes to having a great sense of humour, second place goes to Brandon, with Shawn taking third. On the other hand, men named Ali are last overall in the sense of humour department, scoring lower than both Harry and Jordan.

If you want to date a witty woman, look out for a Debra. They’ve declared themselves to be the funniest women, closely followed by Charlene and then by Carol. On the other hand, Elenas (who fall in last place), Ruths, and Jennys probably won’t inspire too many LOLs.

The data was derived from the question “How well does this statement apply to you?: “I have a great sense of humour” on a self-assessment scale from 1 -7

SEXIEST NAMES: Micheal and Jacqueline
According to EliteSingles, the sexiest name is Jacqueline – it was the highest-ranking female name on the sexy scale. Coming in at a close second is Rita, followed by Eva. On the other end of the sexiness scale, Crystals claim to be the least sexy, along with Louise and Janet.

And going three for three, (which makes us question a thing or two about the study), Micheal takes top ranking in the sexiness department. Anthony and Adam follow closely behind. Showing less confidence is Gordon, who is last on the sexy scale, beating both Jordan and Jon to that particular title. This data was derived from the question “How sexy are you?” on a self-assessment scale from 1 –7.

So, basically, if you’re a Micheal, a Joanna, a Debra, or a Jacqueline, you can date with extra confidence. Of course, it’s also worth remembering that the data was derived from user self-assessment, suggesting the most attractively named singles could also be the ones with the biggest egos (Micheal, we’re looking at you).