The sad reality that Hollywood actresses have a shelf life when it comes to playing on-screen love interests is nothing new.

Apparently, that shelf life could be as young as 37-years-old. Recently, Oscar-nominated actress Maggie Gyllenhaal made headlines when she was quoted saying that – by Hollywood standards – she’s too old to play the love interest of a 55-year-old man.

Looking into the matter further, writer and producer Stephen Follows decided to crunch numbers to examine the age gap between males and females in romantic films. He drew from a dataset of 422 rom-coms.

Each film was released between 1984-2014 and grossed over $1m at the US box office. Follows documented which two actors were the main heterosexual on-screen couple, and noted the exact ages of the actors upon release of the film.

He found that at no point in the past 30 years has the average age of female leads in rom-coms been older than their male counterparts. On average, their male co-stars have an additional 4.5 years on them.

Robert Redford, Dudley Moore, and Richard Gere have the largest age gaps among male leads, while Julia Roberts, Debra Winger, and Winona Ryder are typically much younger than their male co-stars.

Dudley Moore in particular robbed the cradle on-screen in 1984; he shot Micki + Maude when he was 49 and co-star Amy Irving was 31, and Unfaithfully Yours later the same year, when he was 50 and his love interest, Nastassja Kinski was just 23-years-old.

When it comes to the 12 per cent of female-directed rom-coms released between 1984-2014, this age gap is slightly smaller. 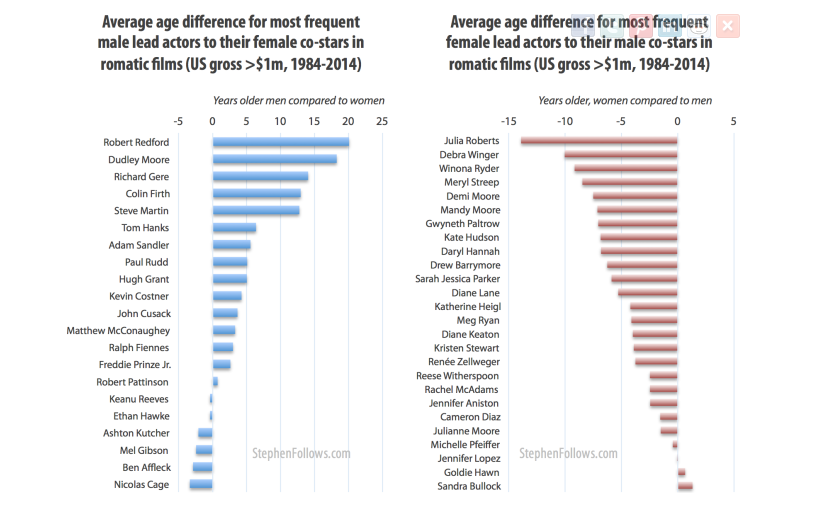 It’s important to note that Follows strictly studied romantic films, and acknowledges that there could be a better age differential in action films.

Though the younger female with older male thing is obviously nothing new, the irony is that a lot of Hollywood’s finest leading ladies actually love dating younger men off-screen.

Case in point: Demi Moore (that’s a given), Julianne Moore (her husband, Bart Freundlich, is nine years younger), Robin Wright (after her split to Sean Penn, she began a relationship with Ben Foster, who is 15 years younger), and Halle Berry (her daughter’s father Gabriel Aubry is nine years her junior).

And that’s just to name a few.

The only hope is that this reality is reflected once in awhile in the casting process.