Any female knows that – when it comes to clothing sizing – a size 4 in one brand could be a 6 or an 8 in another.

Similarly, I can squeeze into an extra small in some brands, while in others, I could fill out a medium.

That’s because women’s sizing is completely ridiculous. The numbers just don’t make sense. Consider this: a size 8 dress today is nearly the equivalent of a size 16 dress in 1958. As for a size 8 dress at that time, there isn’t a modern-day equivalent.

That’s because a 50s style size 8 would be smaller than today’s size 00.

Americans did get heavier over the years, contributing to the American obesity epidemic. In fact, data from the Centers for Disease Control and Prevention show that the average American woman today weighs about as much as the average 1960s man.

But that’s not the only factor at work when it comes to the shift in women’s sizing – that would be too simple.

As outlined in a recent Washington Post article, determining a standard sizing chart for women was – not surprisingly – not a simple task (nor should it be). Modern day female clothing sizes stem from a depression-era attempt by the US government to define the typical “average American woman.” Back then, they sent statisticians to survey and measure nearly 15,000 women to determine whether any proportional relationships existed among measurements that could apply to a standard system of measurement. Not surprisingly, they couldn’t.

However, the result was the first system of arbitrary numerical sizes that weren’t based on any specific measurement. The government revisited the project in the late 1950s when the National Bureau of Standards published “Body Measurements for the Sizing of Women’s Patterns and Apparel” in 1958. In addition to the original 15,000 women surveyed, it added a group of (presumably fit) women who had been in the Army during World War II.

The whole point was to “provide the consumer with a means of identifying her body type and size from a wide range of body types covered, and enable her to be fitted properly by the same size regardless of price, type of apparel, or manufacturer of the garment.”

The result was the first modern women’s clothing size charts, where women’s sizes ranges from 8 to 42. A size 8 woman had a 31-inch bust, a 23.5-inch waist, and weighed 98 pounds.

The standards were updated again in 1970, but clothing manufacturers were growing frustrated that the “representative” women initially measured for the standard weren’t exactly representative. As in, non-white women weren’t included, and women in the army tended to be more fit than the typical 50s housewife.

Anyway, by 1983, the government kissed the standards goodbye completely and left manufacturers free to define the sizes as they, wait for it, saw fit.

And that was good news to the manufacturers. It meant that they could revise the sizing downward, flattering customers in the process (and making them more inclined to purchase).

The result was measurements that added up to a size 12 in 1958 were a size 6 by 2011. Not to mention, with the sizing now up to the manufacturers, the sizing became more arbitrary than ever as manufacturers defined their sizes differently.

Now, The Washington Post points to a New York Times graphic from 2011 that shows that a size 8 waist measurement could differ by as much as five inches of cloth by different designers. 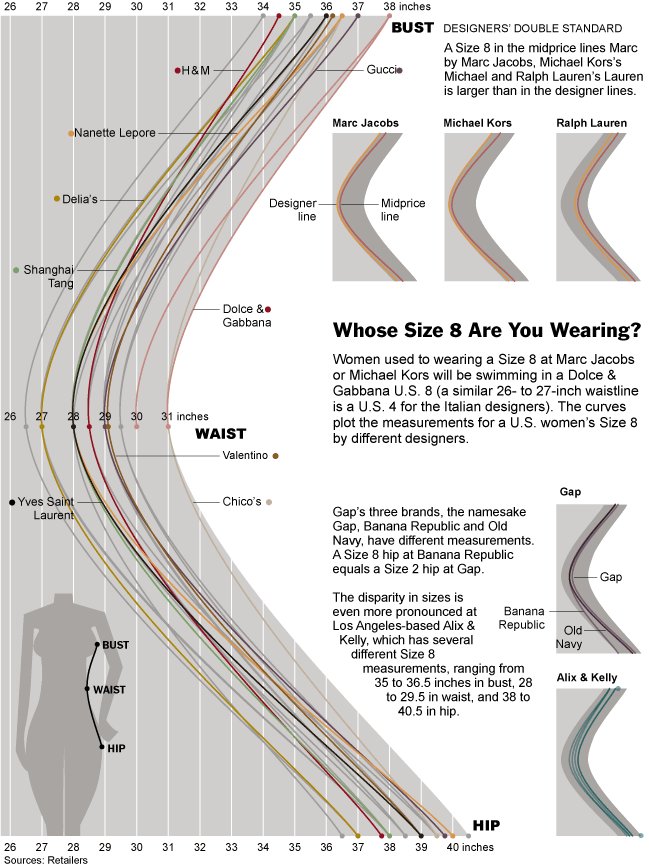 And, no, that’s not shocking news to any female.

In the 1990s, the American Society of Testing and Materials began to restandardize women’s clothing. But they were too late. Manufacturers were enjoying making their own sizes, and many continue to ignore the standards all together.

And, for that reason, females are left to fend for themselves when it comes to determining which size they may be. That’s why, unless you know the brand, order clothing online can result in a literal pain in the ass.

Not to mention, it makes it pretty maddening to shop for a female when it comes to birthday and holiday gifts. Gentlemen, now you know who to blame when that shirt doesn’t fit her just right…