Each year, baseball hero Joe Carter hits a homerun when it comes to throwing the kind of party you’ll talk about for months after the fact.

For its sixth year, the pro athlete-filled Joe Carter Classic Golf Tournament went down yesterday and Tuesday at Eagle’s Nest Golf Club in support of the Children’s Aid Foundation.

Naturally, the event calls for an after-party – it’s not every day that Joe Carter is in town and surrounded by some of his favourite people.

I mean, Snoop Dogg (or Lion, I’m confused) flew in just for the occasion.

Returning to the ballroom at the Shangri-La, last night’s Joe Carter Classic After Party included a headline performance by the legendary rapper.

Both Carter and Snoop have been making the most of their time in the six.

Carter returned to his former stomping grounds on Tuesday night for the Blue Jays-Miami Marlins game. Snoop threw out the opening pitch before joining Carter, Wayne Gretzky (who, sadly, was absent at last night’s event), and others at the Roger Centre’s Summit Suite.

Snoop later made an appearance at Bloke nightclub (outside of which, unfortunately, gun shots were fired). 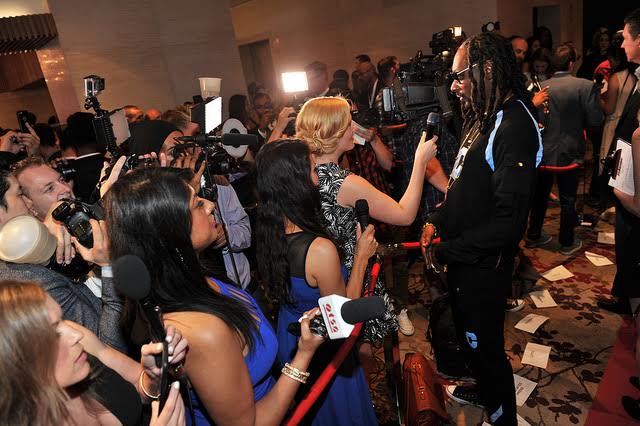 But for all the baseball watching and King West partying, Snoop Dogg – whose red carpet appearance was accompanied by the faint smell of weed – told me that the best part about his Toronto visit so far has been the company he’s among.

“The highlight has been seeing people like Wayne Gretzky, Dan Marino, Ozzie Smith, Ed ‘Too Tall’ Jones – all these great, superstar athletes who I’ve watched, and being able to have a conversation with them,” said Snoop.

“I’m seeing some of the greats I grew up watching, and they say I’m a great man, so it’s fun being around all these great people and a part of a great event. Hopefully we’ll raise a lot of money and be able to do it over and over again,” he says.

As for the Canadian he admires the most? “Bubbles, from the Trailer Park Boys,” he says without hesitation.

Bubbles, he says, is also his favourite person to smoke a joint with.

The beloved (to some, at least) Trailer Park Boys star must have left quite the impression a few weeks back when Snoop hit Truro Nova Scotia to film appearances in the 10th season of Trailer Park Boys. I guess if you’re going to smoke a joint, it would be pretty hilarious to do so with Bubbles.

As for Joe Carter, he and Snoop go way back. 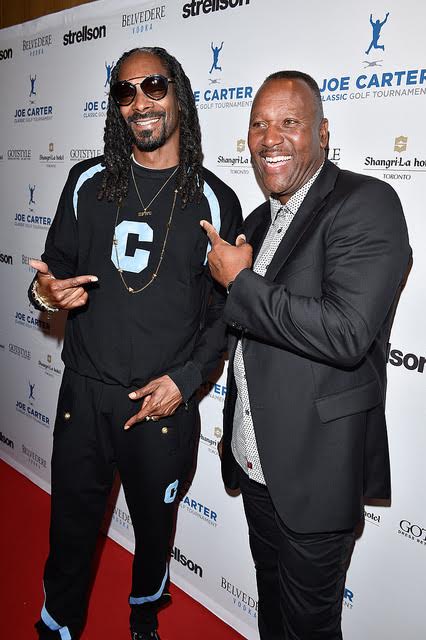 “I met Joe years ago in the game, doing my thing, loving what I was doing and loving what he does and we’ve been trying to get me out here for many years, and it just so happened that now’s the right time, it’s so perfect,” said Snoop on the carpet, just moments before Carter joined him for a reunion that confirmed their bromance and a photo op that had photographers practically pushing each other over.

The thing that resonates about Joe Carter every time I see him is his incredible energy – whether he’s chatting on the red carpet, or snapping selfies with fellow party guests.

When it comes to Carter’s highlights of the past few days in Toronto, he can’t pick just one.

“Everything has been a highlight, but this is just the icing on the cake,” he says. “Walking the red carpet, and getting to see all the excitement – all the buzz – I like that it’s packed because I like to have fun. I like to have a good time. That’s what this is about. It’s about raising money – but have fun doing it.”

He could later be found mingling with the many guests who lingered on the sidelines for their opportunity to introduce themselves and take a picture with the baseball legend.

While it’s pretty much impossible not to love Joe as a Torontonian, he in turn, has a lot of love for both the city and Canadians.

“I think of myself as Canadian now, it’s my second home,” says Carter. “When I go out here in public – to a restaurant or whatever – fans are so nice. I’ve met some wonderful people here and built lasting relationships here.”

When we caught up with Meastro, the born and bred Toronto rapper – who opened for Snoop – shared his love for Carter too. 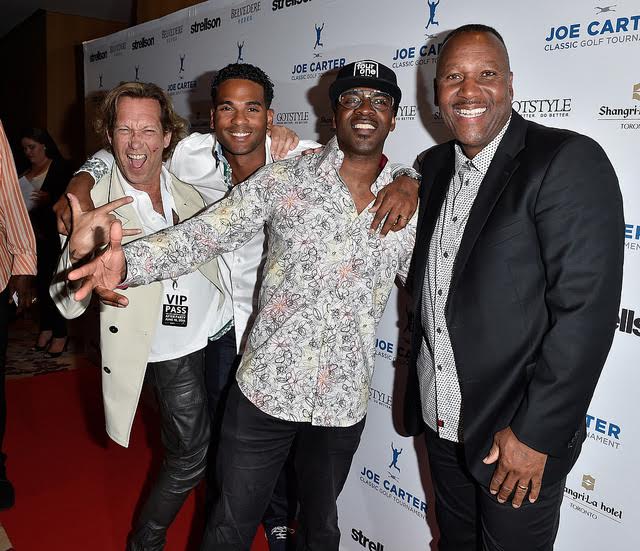 “I remember watching Joe Carter on TV during the World Series. I remember what he did for the Blue Jays and for my city. Then I met him at an airport last summer and I shook his hand, and look what it tuned in to,” said Maestro.

Naturally, he has a lot of love for Snoop too.

“How cool is that, that I get to open for Snoop Dogg? Backbones will be sliding.”

And that they were during both Meastro and Snoop Dogg’s nostalgic performances.

Snoop performed favourites like “Young, Wild, & Free,” “Who Am I (What’s My Name)?, and “Nuthin’ But a ‘G’ Thang” (which he prefaced by telling the photo-snapping crowd that he was “bringing back some of the sticky icky chronic from 2001″). He also brought a little Biggie and Tupac into the mix, as well as a crowd-pleasing version of “Stand By Me.”

So, yeah, it’s safe to say that the party is worth a slower-than-normal start this morning.

All photos courtesy of George Pimentel