An employee of iconic Canadian mattress retailer and radio jingle powerhouse Sleep Country Canada may finally have given people a reason to answer the question, “Why buy a mattress anywhere else?”

That answer, as a recent story told by Ajax resident Samantha Loucks would suggest, is to avoid sexually suggestive texts by a rogue employee.

Hours after a mattress was dropped off at Loucks’ home, she received a text from a Sleep Country employee asking her to “let [them] know how it is lol” – a harmless enough inquiry until the “lol” at the end, which is about as inconspicuous as the chill half of Netflix and Chill.

Her response was in line with what you’d expect from someone thrilled by their new purchase from an award-winning mattress store – “A lot bigger than my old one but so far so good!” – to which the employee replied, “Some say bigger is better. Are you in it now.” 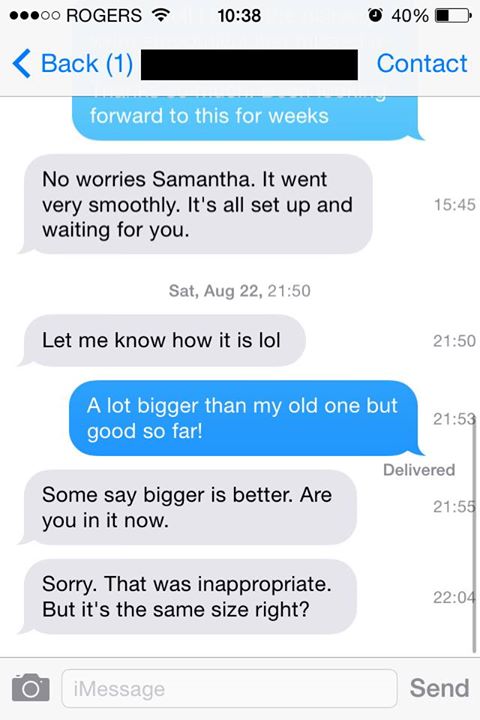 And thus, a line was crossed, a fact that took the Sleep Country Lothario just nine minutes to realize.

His next correspondence: “Sorry. That was inappropriate. But it’s the same size right?” Not only inappropriate, but also not right, either, because she just told you it was a lot bigger than her old one.

“Obviously, I was really uncomfortable,” Loucks said, adding that she’s now fearful of her safety since this anonymous person knows everything about her – right down to the very specifics of her mattress.

In response to the ordeal, Sleep Country CEO Dave Friesema strung together a series of words about the company investigating, being passionate – slippery word choice! – about customers, and policies in place to prevent such incidents.

And that’s the story of how the radio jingle of the century became obsolete.