As our 6 seater propeller plane approached the Sabi Sabi runway, I looked through the window to see two giant elephants standing on guard as our welcoming committee.

We deplaned after a fairly smooth landing and were immediately greeted with fresh towels, water and warm smiles from our rangers, Ronald and Mike. They explained to us our drive would be about 20 minutes until we arrived at our lodge, and to keep an eye out for animals as we drove. On route we encountered a pack of wild dogs (with their puppies), a number of zebras, elephants and giraffes all before pulling up to the entrance way to Selati Camp at Sabi Sabi. The first thing I noticed was the lack of gates, yes we were staying right in the middle of Kruger National Park. This meant each night our ranger (and his trusty rifle) would accompany us to and from our rooms.

I had seen a number of photos of Selati camp prior to arriving at camp, but I was blown away by the level of detail, craftsmanship and historical memorabilia found throughout the lodge.  The camp is built on a historic railway line. The Selati Line, which used to transport gold to Mozambique back in the 1800s. Sabi Sabi’s themes represent yesterday, today and tomorrow, and Selati preserves the historical past in such an elevated and desirable way. 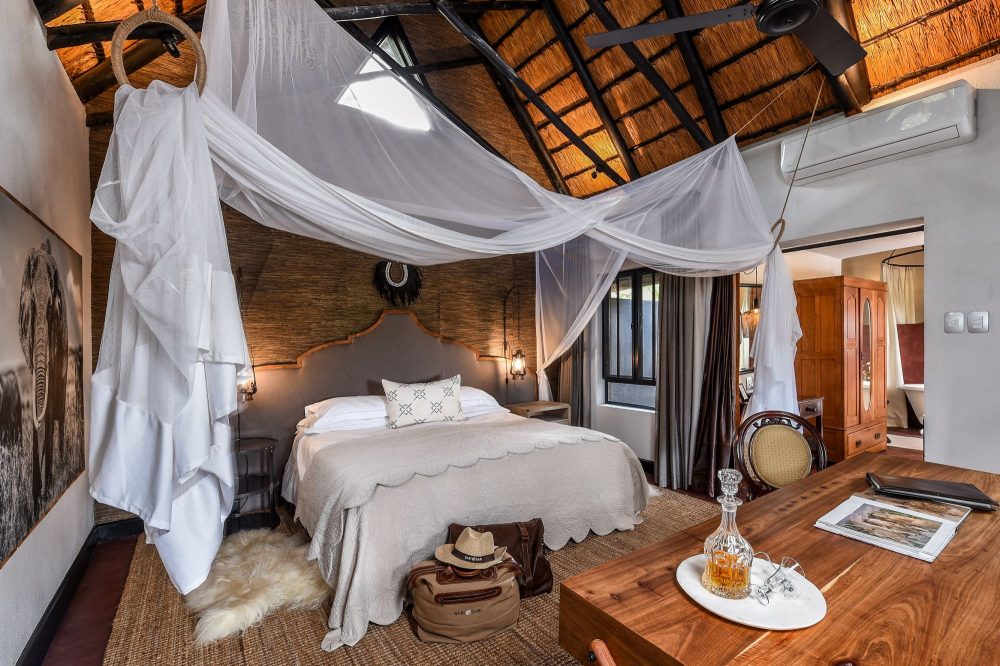 I awoke the next morning to an elephant trumpet so loud it sounded as if it was coming from my bathroom. Moments later there was a tap at my door, “Good morning, there is a lot happening out there and we need to get going!” Our ranger Ronald accompanied us from our home in the bush to the dining room, pointing out obvious elephant tracks and dung on the way. I was taking my first sip of coffee watching a warthog drinking from our pool when Ronald handed me a set of binoculars and pointed toward the watering hole at the base of our camp. Through the lenses, I saw a pack of hyenas laughing and triumphing over their latest kill. Our guides explained to us that waking up and seeing the tracks from the night before is their version of waking up and reading the newspaper each day. It’s always different, and there is always something exciting that has happened.

Pulling out of our camp we saw the angsty elephant that had visited us hours prior, he was now pulling out the trees lining the entrance to our camp. We visited the hyenas and discovered they were feasting on a baby water buffalo. The next three hours we witnessed a wildebeest giving birth, tracked a leopard in search of some shade, followed a big herd of elephants, and saw the very herd of water buffaloes confronting the hyenas about their kill. Eventually, they surrounded the carcass and forced them to leave the scene of the crime. 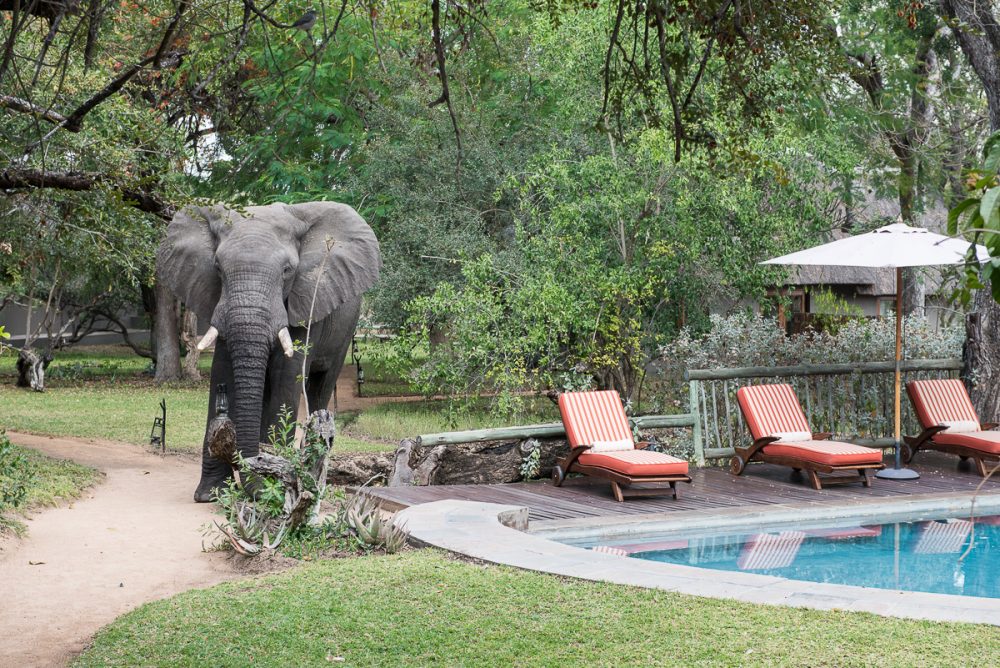 My eyes were wide as Ronald pulled over the vehicle and asked us to get out of the car. I was getting hungry and was delighted to see we were surprised by the most lavish breakfast in the middle of the bush. I had certainly overlooked how educated and intuitive the rangers really are. As we sat down to breakfast Ronald explained to us that all rangers must complete an intense training program. It’s quite a coveted position to be a ranger, with a number of perks. In order to pass the final test to become Sabi Sabi ranger, you must be able to draw and name the property’s 217 roads on a blank piece of paper. Yes, so much had already happened and it had only been 12 hours.

How do you know which one to book?
Research, reviews and Instagram. I spent hours researching a number of different areas and lodges. Most lodges are all-inclusive, meaning all food, drinks and game drives are included in the price you pay. This is one area I encourage you to splurge in if you have the means to. I chose Sabi Sabi and selected the Selati Camp as it is an intimate lodge with only 7 suites. It depends on what you are looking for, but there are a number of concierge services that can help with your booking.
Tip: Look for a lodge that advertises The Big 5, meaning your chances of seeing a lion, leopard, elephant, white rhino and water buffalo are very high.

What does a typical day look like on safari?
In terms of animal sightings, it will vary. Each drive I took was completely different, but the guides follow tracks and sounds. Days would start and end early. 5 am wake up calls are followed by a quick snack and coffee, then you would head off for your first drive of the day. You would be back 3 hours later and greeted with a massive breakfast. From 10 am- 4 pm your day is free. You can lounge at the pool, visit the spa, go on a walking safari or arrange to visit the local schools and communities in the area. At 1 pm you would have lunch (again, a full spread). By 4 pm you would be offered tea and cake then set out for your last drive of the day now that temperatures we not as warm. Evening drives were my favourite. They even find open spots in the bush to have sundowner cocktails. Arriving back at camp, you would have dinner with your rangers and some of the other guests before calling it an early night. 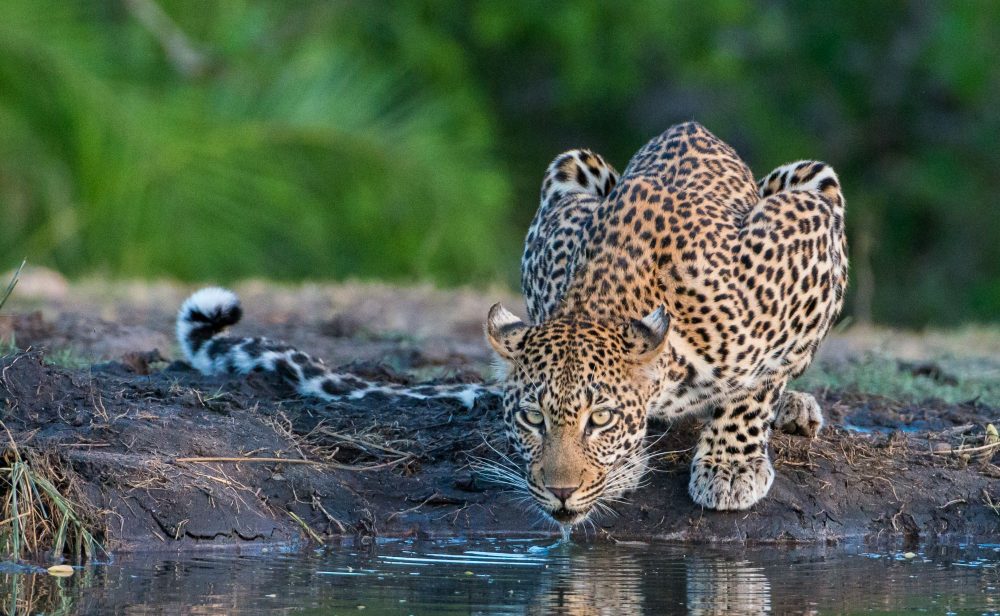 Do you need to dress for the part?
Yes, and no. There are definite advantages to wearing safari neutrals. Dark colours are hot and attract bugs. White and red tend to distract animals. On a walking safari, you definitely want to stay in neutrals clothes, and in general, it’s better for the Gram if you look the part!

Were you ever afraid?
No, well maybe once when we were merely 4 feet from a pride of lions. On the very first day our ranger explained that animals are used to seeing the safari vehicles, they’ve seen them every day since they were born. The animals see the vehicles as one object, not the individual people inside them. Just don’t leave your vehicle unless you are told to.

How many days should you go for?
It’s up to you, I found 3 days perfect. I was able to do 5 game drives and a walking safari and saw the Big 5, witness the birth of a wildebeest, see rare sightings like the aardvark and wild dogs and see a number of (near) kills.

How do you get there?
This depends on which lodge you choose. I opted for a private charter took me from Johannesburg right to the private airstrip on the property. The lodges will arrange transfers if you fly into a larger airport, always best to ask the concierge.

Do you tip?
Yes, you tip your guides and rangers, as well as the staff that cooks and cleans for you. Although working at a luxury game reserve is one of the most sought after jobs in the country, tipping is very much appreciated. 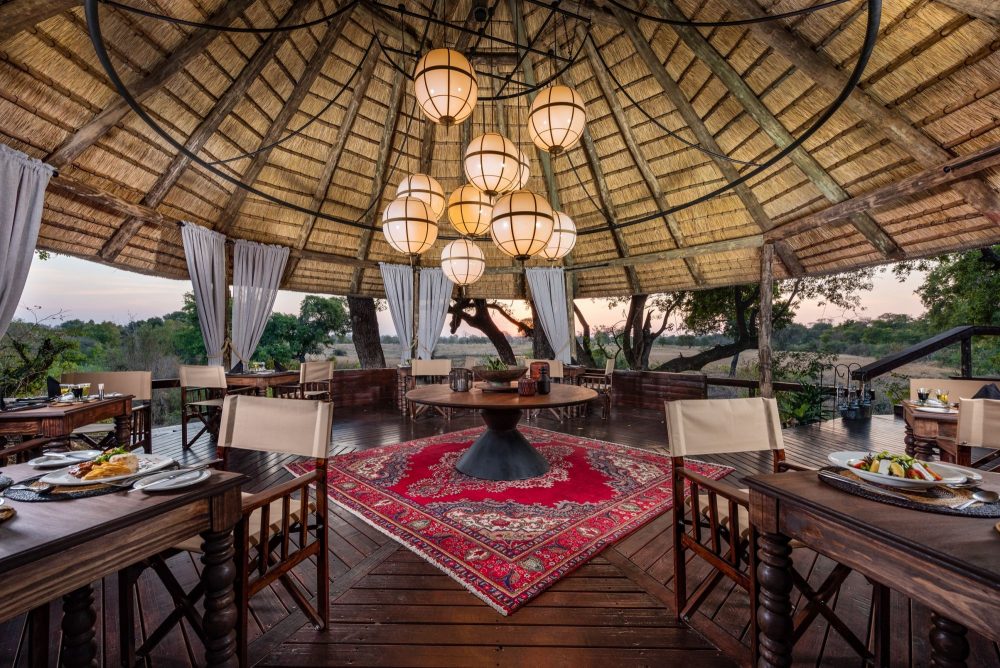